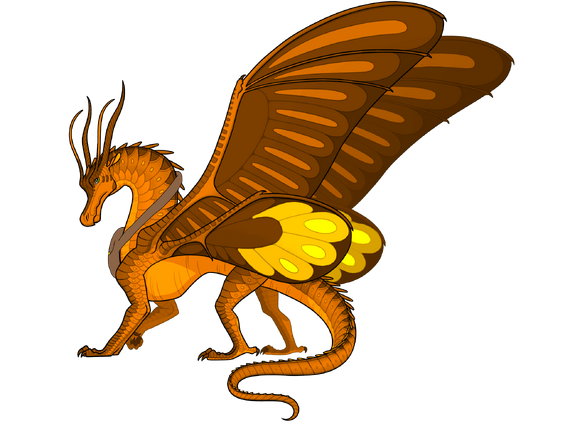 
A newbie in the world of science...

And a loner in the world of Project Olympus.

That's Comma, one of the only Pantalan staff members in the entire project. Because of the fact that he's Pantalan, the others treat him like he is lower than him.

And it sure is hard to be a SilkWing on Pyrrhia

(Note: Project Olympus is set 115 years after Canon, so Wasp is long gone and Pantala is peaceful, though Comma still dislikes HiveWings)

Appearance
Comma mostly looks like a regular SilkWing, with wings that look like the Comma butterfly, his namesake. He's rather thin, and doesn't have much muscle, which is often pointed out by the less kind project members. His posture isn't very strong, kind of relaxed, unlike most of the others around him. He tries to hold his head up more than he usually would, but it's quite hard for him, and he's often made fun of when his shoulders slump and his head drops, laughing at the fact that he 'can't hold up his own head.' This is true, but they mean it in a more rude, teasing sort of way.

Comma's mainscales are a pale orangey-brown, going from his head to the tip of his tail. His underscales are more of a browny-orange, the orange being more visible than the brown. The frame of his wing is orangey-brown, like his mainscales, and the actual wings are brown with orange spots, and they almost look black, though they aren't. He has bright, emerald green eyes full of curiosity and excitement.

For accessories, Comma doesn't wear much, but he carries a leather bag everywhere containing his notepad and sketchbook for observing the subjects, as he is one of the scientists that isn't assigned to anyone. He also sometimes chooses to wear a silver pouch around his neck that he puts small snacks in.

Personality
Curiousity. Inquisitiveness. These are the most noticeable traits of this SilkWing scientist. He always wants to know what's going on, something that most the others label as nosiness. Truly, though, he's just curious. He likes to observe things closely when they catch his eye, and he asks questions a lot, though they are often ignored by the others. When he becomes interested in something, he won't stop until he's learned everything he can about it.

He can be a bit of a chatterbox, talking about anything and everything with anyone who'll listen. He especially loves when he finds that others have things in common with him, and he'll chat for hours if he can with them, talking about all sorts of things. He especially likes to talk about food, science, how much he loves his tribe, and his interests in the tribes of Pyrrhia.

Comma is a loyal friend, and he is very good at keeping secrets. If he is told a secret by someone he trusts, cares about, or works under, he will keep it until he dies, no matter how hard it is to keep it. On the point of his loyalty, he will always stand by his friends, whether or not there is a reward. If someone he cares about is hurt, he's always the first to ask if they are alright and help them feel better.

Comma isn't all happy though. It's hard to be a SilkWing in Project Olympus, a project that favours Pyrrhian dragons. He is often treated badly, and though he has thick skin and can ignore it, deep down it stings. It really stings, and he hates it. He really does.

Comma, as a SilkWing, has rather good flight, though nowhere near as good as the SkyWings'. He isn't super fast, but he is quite skilled at quickly maneuvering and switching direction in mid-air, which is, in his opinion, just as important.

Comma can shoot silk out of his wrists, like most SilkWings can, though it is just regular silk, not flamesilk.

Comma, unlike most PO members, can actually predict the weather, which is something the SilkWings share with the HiveWings. This is something that is helpful, as he can decide if it's safe to let the subjects outside depending on the weather.

Comma is very intelligent, especially when it comes to science. He's read most of the books in the lab library, so he knows even more than he knew before he was accepted to the project.

History
A SilkWing in Project Olympus. It's such a rare thing, only the most skilled and gifted Pantalan dragons and hybrids can even think about receiving the unmistakable Project Olympus Info Packet. So how did Comma, a seemingly typical SilkWing, ever become a member of this project? It's simple. Dragons aren't always as they seem.

Comma hatched on Pantala to two intelligent SilkWings named Marble and Brimstone. The two took care of him the best they could, but as they were often busy, he often found himself in the care of his sister, Tortoiseshell. Unlike their parents, Tortoise didn't try to take care of her brother at all. She simply went on as normal when she was told to care for Comma. She would invite her friends over and hang with them, only feeding Comma when she herself was hungry, and shushing him whenever he tried to speak to her.

When Comma was old enough to care for himself, his sister and her friends would chat about him behind his back when he was at home with them, and Tortoise would often roll her eyes at him and tell him to go away if he got too close.

Eventually, Comma began to spend most his day in his parents' study, where he was permitted to go, a place completely dedicated to science. Tiny animals were in cages, tanks, and other places where he could observe them. He spent his times in that room doing just that. Observing. He would look at the animals for hours, and write down his notes in a small journal he had received on his hatching day.

Very quickly, Comma became passionate about science. He spent more and more time in the study, and began to collect animals to study in his room.

In a few years, he discovered a new insect, the Heirbug, named after the heir to the SilkWing throne. He was quickly plunged into a life of interviews and questionings all about the heirbug. It was very uncomfortable for him, although he did love to speak.

At age 10, he decided to take his studies further. He would take them to Pyrrhia.

With his new celebrity-like status, he was provided with a boat and a driver, and he crossed the ocean onto the humongous continent known as Pyrrhia.

Eurus: Comma is terrified of the SkyWing assigned to Subject 161, especially as he believes she is one of the many dragons who think he doesn't deserve to work there, especially as she seems to go out of her way to avoid speaking to him, and he has seen her glare at him.

Marble: Comma misses his mother greatly, and hopes she and his father are doing well on Pantala. Marble always helped him when he was sad in his dragonet years, and he longs to speak to her again.

1 of 4
Add photo
Retrieved from "https://wingsoffirefanon.fandom.com/wiki/Comma?oldid=2048786"
Community content is available under CC-BY-SA unless otherwise noted.