I'm Looking Over a Four Leaf Clover by Mort Dixon

Some random hut in the middle of a forest, but she also lives in the main 57th starship

her mom and dad

4. enchant a high amount of anything all at once

SHE DON'T NEED NO SHIPS

"What? If you didn't bring chocolate go away."
THIS IS PUMPKIN'S SONA, DO NOT STEAL CLOVER OR HER CHOCOLATE (Warning, you may die)

Clover is a RainWing/SandWing hybrid dragonet. She has camouflage scales. Her wings are like fire along with her eyes and frill. This gives her a naturally intimidating glare.

Like most SandWings, she has a tail barb that is poisonous. Hers is special though, because her poison is mixed in with molten lava. This weird phenomenon doesn't affect her, of course, but it is a nightmare for her enemies.

She also has a frill like a SandWing, this is the only part of her that can't change color very well.

An Amethyst amulet hangs around her neck, providing minor magic.

Clover is very friendly to most dragons, but she also has a firm sense of justice. She does not like it when dragons are taken advantage of. She has a fierce nature that comes from being determined and righteous. She is also extremely scary when she wants something and she doesn't get it.

"Who said I had an interesting backstory?"

No really, I have no idea what to put here. Hmmm, i guess the Amethyst origins? Sure.

Clover was only a two-years old dragonet, and her fate was sealed. She was sorting fruit... and eating chocolate... when a commotion came from the healers hut in the RainWing village. She listened. "Ye, 'e was struck by lightnin', smashed ina tree I'll bet ya." She heard the healer say, she saw a gray tail poke out from the doorway. "It's too late...". Clover flew up to the healers hut and poked her head inside, and the lightning-struck dragon woke up. "Now ye' liddle choc'late obsessive drag'net woke em' up!", Clover ignored the RainWing healer and studied the dragon. Surprisingly, he was a SeaWing, he wore an amethyst around his neck, but it looked darker than it was supposed to be. Clover took the amulet in her talons and it started glowing again. Then the SeaWing nodded, and fell asleep forever.

Iridescence(Iri): Clover thinks Iri is hilarious, and would 100% hang out with her at a party. -Friend-

Sunspark: Clover belives Sunspark as sunny and positive, but can get things done. -Respected Friend-

Songbird: Clover feels bad for the poor dragonet who cant fly, but belives Songbird as a good dragon. -Friend-

Cocoa & Bean: Clover is amused by their personalities, and thinks its funny that together their name is cocoa bean, which is the same ingredient as used in her favorite food. -Acquaintance-

Seal (Project 1023): Clover finds Seal as an interesting dragon, plus he owes her two pounds of chocolate. -Friend-

Vaporwave (AKA the BEST hybrid): Clover thinks Vaporwave is confusing, hilarious, and most of all relatable. -Respected Friend-

Opal (AKA TOAD-LEGGED RAINBOW-FACED DAUGTER OF A CONCUSSED HALF-BAKED LIZARD!!!): Clover despises of Opal's rude nature, and the fact that she stole Clover's amulet for a while. She also thinks Opal as smart as a concussed camel. -DIE-IN-A-HOLE-ALONE enemy-

Redbelly: Clover has no idea how to react to Redbelly, but he seems nice enough. -Acquaintance-

Grima: Clover thinks Grima as an ally, a fellow chocolate lover, and the dragon who can help her build a chocolate kingdom. -Friend-

Wildfire: Interesting mask you got there friend -Fren-

Lucina: Clover is just strait up confused on why a video character ended up as a dragon, these worlds sure are strange. -Pal-

Quilava: Since they look so similar, Clover calls Quilava "Clone" reletavely often, tho she is not so sure whether he picked up on that or not. -Palemy (Pal-Enemy)-

-Clover LOVES chocolate and will destroy anyone who steals it from her.

-Clover is single and she don't need no ships.

-She mainly uses magic on vines instead of fighting, because heck, fighting sucks.

-She cant use more than 6 spells per day or her magic amethyst will break.

-Used to live in the rain forest, but now lives in a cabin alone. 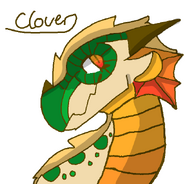 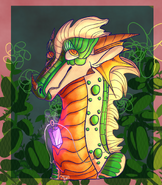 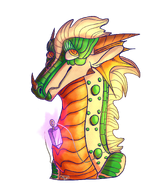 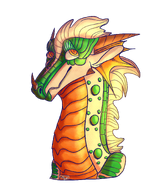 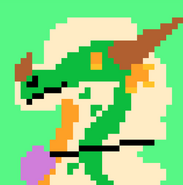 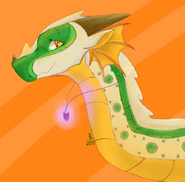 By SunsetTheSkyWing0w0 (Queen Clover of Chocolate) 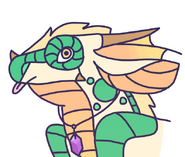 By me (Coot Clover) 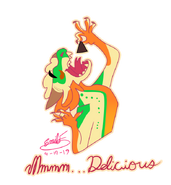 By Marbles (A meal fit for a queen!) 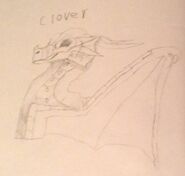 Wings of shadow, by Ver glass! 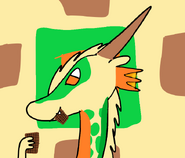 By a very puggy pugly 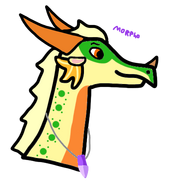 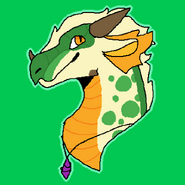 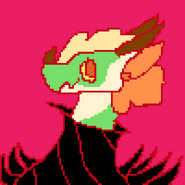 Clover as Grimm from Hollow Knight by Verglas XD 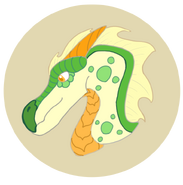 by some Coastal Dreams and coastal things 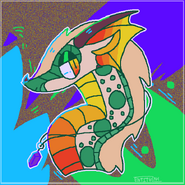 By wildfire! (So pretty :O)

YOU CANT STOHP ME, by Undertale Trash 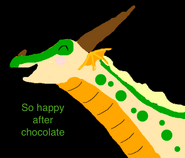 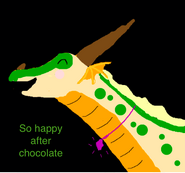 by Pumpkin, cosplaying at Hornet with Vaporwave
Add a photo to this gallery
Retrieved from "https://wingsoffirefanon.fandom.com/wiki/Clover_the_Rain/SandWing?oldid=2097270"
Community content is available under CC-BY-SA unless otherwise noted.