Please do not edit. I can spellcheck myself, thank you very much.

Every irritating action leads to an increased and opposite reaction.

Aha. You're mistaken. I don't give a damn about how I look.

Small. Cloud is shorter than most dragons her age, thin and skinny. She has sharp angles in her frame, but it's all softened by her youth, a bit of round pliability left in her frame.

Her main scales a shimmery, a gleaming, polished white. They had slight hints of silvery gray in them, impure but almost there. The smooth surfaces reflects easily, sending glowing shards of light across the walls when near any source of light.

Compared to her scales, her underbelly is certainly softer in looks. It's a purer white, but seems to absorb the light in a seamless shade instead of sending back rays.

Her horns and spines are the same shade, pale as the largest moon, gleaming and glittering. Each spine ends in a needle shape point. Her icicle horns are sometimes ruffled, messy, but stay sharp and piercing. They can seem slightly translucent, when bright light hits them just right.

Her wing membranes are pale, icy blue. The color seems to be solid, but up close, one can see subtle changes in the shades, spots slightly paler or darker than others. Her wings fold neatly by her sides, held up in an almost dainty fashion.

Her eyes are dark, deep blue, a perfect color to bury secret thoughts in. They can be alive and dark with anger, or comforting and warm. It's the outlet for her anger, the way to tell if she's ready to lash out, relaxed and pleased. Any emotion can surface from the depths.

She doesn't wear many accessories. A simple bag on short trips, some little fancy trinkets when she feels like it. Only what she needs, sprinkled with a little stuff to make her look better. There is one thing she almost always has on; a spiraled glass pendant, the colors swirled transparent and blue on a simple black string.

She often has a smile on her face, or an expression of suppressed or full on fury. However, if one was to look closely, they would see the faint impression of bags under her eyes, a hidden weariness that never quite goes away.

Impatience may not be a virtue, but it's who I am. Deal with it.

In a new place, somewhere different filled with strangers, one would call her shy. It takes effort to talk more than a whisper, she's uncertain what to do, and likely wants to leave very soon.

If she gets more comfortable when someone else breaks the ice. She starts reaching out, making friends, laughing like they have known each other forever. It doesn't take long for her to go from dead silent to grinning wide. Yet, she is still rather socially inept, not that it matters too much, at least to her.

If she gets to know other dragons more, she gets more loyal to them. She can and does get annoyed with her friends every now and then, but everything ends up forgiven within days. Sometimes weeks, but she always lets go of the grudge eventually.

First impressions mean everything to her. If at first, another dragon comes off as rude, that's the way they stay for a long, long time. The general hostility can dissipate, but it takes very, very long.

Overall, she doesn't act like she cares much about anything, living life the way it comes. She can be nice or rude, depending on how the day has been so far, and which dragon she happens to be talking to.

Though she gets along with others just fine, being social can drain her until she just wants to curl up in a pile of blankets and sleep. When alone, she likes reading into the late hours of the night, and drawing when she feels like it. She doesn't really like what she creates, but loves to read every scroll she finds. She occasionally sings to herself, abet maybe a bit off key.

Cloud can be philosophical when alone for long periods, wondering about life and death, the purpose of everything, all the coincidence that created life in the first place. It can make her head hurt and her thoughts start running in circles, but she thinks about it anyway.

She can lash out to others when grumpy, getting worked up over the smallest things, growling at her friends. She tries to be kind, but sometimes she can stop herself from screaming at the world, or throwing sometimes heavy at the annoying dragon in the room.

She procrastinates. Things without a due date never get finished, things that do get started the night before. She never actually does something unless it affects something, say, her grades. It's quite a problem, but she's attempting to overcome it.

Lastly, there is a part of her buried deep inside. It is hidden from the outside world, but affects her all the more. At times, the world just seems… so tiring, she wants to end everything and simply give up. She doesn't, still smiling with her friends and talking animatedly, but someday, the seal could break.

Cloud is a pretty normal dragon, with problems that all face, and that tiny bit of instability that perhaps everyone has. She's so similar to others, but also… unique.

Yep, I'm that super awesome princess who's clearly destined to be queen.

Cloud is royalty. Sort of . A princess, niece of the queen... but also, not really.

Her mother was disgraced, long before Cloud was born. She was moved farther from the royal family, away from all the stuffy royals, because of some tiny crime, long forgotten. Perhaps she had done it on purpose, as palace life wasn't always the best.

But they moved back the moment she had Cloud. And the bouncy dragonet automatically hated it.

The pristine atmosphere grated on her personality. She didn't want perfect posture, to only speak when told to, and the gossip. She didn't enjoy her studies, they were easy and boring, with only rare excitement.

And so Cloud did what she could to get through the years that were mildly interesting, before becoming more and more dull. Then teenage hormones were thrown into the mix, and the rebellious nature was practically branded into her personality.

Her life really wasn't interesting. Sure, there was an occasional skirmish, a palace peasant thrown into the dungeons. Even her mother's constant attempts to push Cloud to work colored her world.

Life really was boring, until it all changed, fast.

Cloud wanders the halls, exploring and escaping from the pain of life in the palace, all the complaints about how rude she was and the like. And as she passed the dungeons, she chanced upon a group of dragons.

They weren't royals, or guards. They didn't belong in the palace.

One found her and Periwinkle, trying to catch the 'stuffy royals'. But Cloud knew the way around the palace, and they escaped. With a strange SeaWing looking dragon helping them. But that was irrelevant.

She doesn't quite remember the events leading up to the moment, but Crystal came, and everything started getting screwed up. As the queen spoke the masses of everyone living in the palace (quite small of a crowd, to be truthful), the chandeliers came crashing down.

And of course, the Stowaways, Ptarmigan, to be exact, was to blame.

It ruined all trust in them. Cloud had started to trust the stowaways, just a little, but it stopped dead. While the palace crumbled, she was stuck. With a dragon she either had to trust or die in the destruction he caused.

She chose the first. Pushing through mile high layers of ice, the stowaways, and some royals, escaped the fallen pieces of ice.

And Cloud realized she was free. Free to explore Pyrrhia as she wished. She didn't have to follow the strict routines being royal needed. she could explore, and escape the blocks of ice that had always blocked her path.

Okay... you're my friend but also super annoying... hey, mother told me honesty was a virtue.

Periwinkle: Cousin. A dragon that cares so much more about the throne than she does. Cloud doesn't mind, the kingdom would be in good talons if Periwinkle was queen. They are related, but separated by interests and so much more. They are friends though. As much as two dragons can be in the cold atmosphere of the Ice Palace.

Philosophy: Friend. Maybe. Actually, that depends. They haven't known each other for long, and usually drown in a great tide of arguments. Cloud just can't seem to agree with the other dragoness for long, but somehow, there's a tentative friendship between them. They can barely stand each other on occasions, yet they had a positive relation. 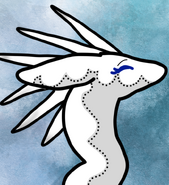 Cloud, by Ciel. Thanks!

By Infinity, thanks so much!

By Rain! It's amazing!

By Dreaming, as birthday present. Thank you!

Cloud as a witch for Halloween. Yay. (this is horrible and I don't care) 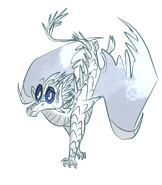 By Dew, she's adorable! But I could do without the file name... 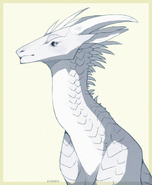 By Sleepy! I love your style! 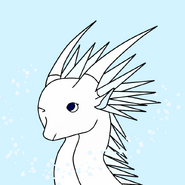 By Me! Slightly better than last attempt! 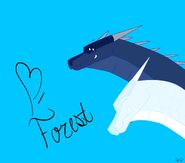 By Forest! Aw, thanks! 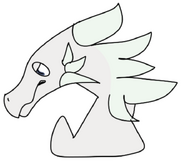 By BDK! Thank you!

By Dreaming! (Wolf) Thanks so much! 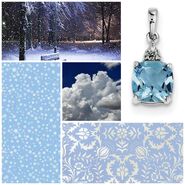 Aesthetic by Sby! Love it! 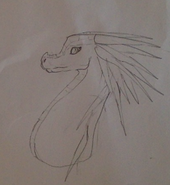 Add a photo to this gallery
Retrieved from "https://wingsoffirefanon.fandom.com/wiki/Cloud?oldid=2183457"
Community content is available under CC-BY-SA unless otherwise noted.