4 (The same age as Moonwatcher was in book six)

Driftwood, Egret, Pomegranate, Inferno (kind of the rest of the Silver Winglet)

dragons without a sense of humor

"AHA! You were amused, I can FEEL it! I TOLD you that you would laugh!" - to Inferno

Cleverness is a NightWing who attends Jade Mounain in the Silver Winglet. He is clawmates with Driftwood (PomegranateTheRainWing854) and friends with Egret (PomegranateTheRainWing854), Inferno and Pomegranate. Before he attended Jade Mountain, he would make clever puns/jokes and music in the Night Village in the Rainforest. He was fascinated by SandWing culture and music while learning about them in school.

Cleverness is casual and humorous in nature. He enjoys making others laugh and his dream is to be Pyrrhia's first stand-up comedian. (he got the idea from studying scavengers.) He makes fun of himself a lot. He gets along with Pomegranate because of their humor. He enjoys music, singing, and dancing as well. He writes songs to keep himself occupied. He is pretty optomistic, but there is one thing he can't stand; BOREDOM. If you ask him, boredom is the worst sensation anyone could feel.

Cleverness is mostly a dark, dusty grey, with pitch black undercales. He has silver teardrop scales behind his eyes, like all mindreading NightWings. He is slightly thinner than average, and his neck is longer than an average NightWing's. he is also less compact than most NightWings, having a less muscular build.

Driftwood (PomegranateTheRainWing854): His relationship with Driftwood, while positive, is complicated. Driftwood isn't sure wether he trusts mindreading, but still enjoys Cleverness's company and companionship. They have similar veiws and a similar sense of humor.

Inferno: Cleverness finds inferno's mind fascinating, and would be happy listening for hours on end. He understands Inferno, unlike most other dragons. They are, however, genuine friends.

A typical NightWing by Joy Ang 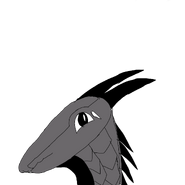 By The Wolves Heart, tysm!!

Ref by me
Add a photo to this gallery
Retrieved from "https://wingsoffirefanon.fandom.com/wiki/Cleverness?oldid=2094149"
Community content is available under CC-BY-SA unless otherwise noted.