circinae (a type of hawk)

Circinae belongs to Darkmoon, and is a main character in the Venomous Vengeance series. Don't steal!

Circinae is a fairly average SkyWing. Her main scales are orange, while her secondary scales are scarlet. Her horns are light brown, and her spines are crimson red. Her underbelly is pale tan. Her eyes are golden yellow, and seem to constantly seethe with anger or frustration. Her build is fairly average, but she is a little on the long and lanky side. She almost always looks annoyed or angry.

Circinae is a dragon who gets irritated very easily. Small things can easily annoy her, and more important things might send her into a fit of rage. Even at school, she has a hard time controlling her temper. When mad, she lashes out with insults and retorts. She seems like a stereotypical SkyWing, but has more under her surface. Really, she's just lonely and wants to be loved, but she's become bitter and angry over time.

The younger child of her family, Circinae was born 19 years after the event of the series, in 5031 A.S. Her parents were two upper middle-class dragons, with her father working as a doctor for Queen Ruby, and her mother working as a physician in a nearby town. Her brother, Pyro, was born a year ahead of her. Throughout her dragonethood, he was always the favorite. Whatever she did, he had already done it better. He was on track to become a great doctor, but Circinae couldn't stand the thought of being the stupid little sister forever. She didn't want to be stuck in her brother's shadow. So from the time she was two years old, she decided that she would be something completely different from being a doctor. She started training to be a guard, and was determined to work in a job that had fighting when she was old enough. Her exceptional progress in training caught the eye of the queen, who offered to send her to Jade Mountain Academy. Circinae gladly accepted, and she now attends JMA as a member of the Jade Winglet.I

Antheraea: She doesn't like how calm and quiet her clawmate is, but at least Antheraea respects Circinae's wishes to be alone. She's also kind of mad at the SilkWing for not telling her about the prophecy sooner.

Dromedary: She finds the peppy, optimistic personality of her other clawmate to be annoying. However, she respects Dromedary's smarts, and appreciates the kindness of her friend.

Floret: She's hung out with the RainWing a little bit, but doesn't like her energy. She also doesn't like how conversations with Floret tend to wander and go down bunny trails. However, deep down, she would consider Floret as a friend.

Starry Night: Star is much more sensible and down-to-earth than some dragons at Jade Mountain. Circinae appreciates how Star always has a snappy comeback locked and loaded, and would consider the NightWing To be among her closer friends.

Stinger: She kind of likes how he isn't a boring, calm dragon. However, she also finds his constant movement and fidgeting annoying. She also holds a slight grudge against him for not telling her about the prophecy when she was the one who got mentally hijacked and made them find out about it in the first place.

Puffin: She appreciates the kindness of the blind IceWing, and he often helps her cool off when she gets too angry. He's probably one of the dragons she gets the least annoyed at. Right now they're just friends, but who knows what the future may hold?

Crayfish: She's pretty neutral toward him, although she finds his excessive happiness annoying. They haven't talked that much, but she's mostly okay with him.

Kingfisher: Much like with Crayfish, they haven't talked much. However, from what she's seen, he's a very calm dragon, and that annoys her. She doesn't really like him, but at least he's better than a stranger. He's more or less an ally.

Atlas: While he isn't as annoyingly calm as some dragons, his hyperactive personality is a bit annoying. He also seems to be an overachiever, much like her brother, and that causes her to dislike him more. She likes his sister more than him. 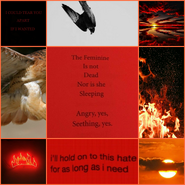 Aesthetic by MKDragonet
Add a photo to this gallery
Retrieved from "https://wingsoffirefanon.fandom.com/wiki/Circinae?oldid=1859875"
Community content is available under CC-BY-SA unless otherwise noted.