This character belongs to Cimmerian, Coding by Forest

Cimmerian looks like the typical NightWing (considering that both parent are NightWings). Everything about her is pretty average. Medium size, normal horns. Has a black-ish navy blue mix color. If you've ever seen an adult NightWing, that is what Cimmerian basically looks like, with a few differences. She is humble, and does not admit to her great beauty.

Cimmerian is outgoing and slightly hyper for her age. She doesn't care about what people think about her. She is smart, and not that athletically strong. Always up for a fun time. She does not like to admit to her weaknesses and always keeps her head up. She can be a bit bossy at times though. She only lets her guard down near her family and close friends. Does not like rain for personal reasons. That is all that you should know.

Cimmerian's background is not very well known. But what is known about her background may not be accurate. It is thought that her mother and father had 3 eggs total. One egg was stolen, another one hatched, but the baby dragonet inside died early. That left Cimmerian. Later Cimmerian's mother had an egg with an Icewing, and so Cimmerian had a stepsister name Shadowmist. Cimmerian ran away a while ago, but is still in touch with her family and visits them.

Addax is a close friend of Cimmerian's, and Cimmerian likes the way Addax thinks and her personality. She gets angry at anyone who disrespects Addax.

Cimmerian met Etesia at school, and they bonded over ther interests in academics. She liked Etesia, even before she visited a psychiatrist. They are good friends at school now, and enjoy studying and having fun together.

Cimmerian is good friends with Misty. She likes her personality, and is used to her paranoia and worry. She likes hanging out with her, especially in times of pressure.

Cimmerian made an unexpected friendship with Sabotage. When she first met him, his personality confused her. But as she hung out around him more, she came to like him better, and they became friends.

When Cimmerian met Ciel she didn't think she'd get to know anything about her. Cimmerian had nothing better to do the day she met Ciel, so she hung out with her. At the end of the day, Cimmerian was friends with Ciel and knew a lot more about her. Nowadays they're close friends.

Cimmerian pronounces her name differently than you may think. It is pronounced: Sim-er-ee-an, not Sigh-mee-re-an. Her nicknames are: Cimm, Cimmer, Cinnamon, and just plain Cimmerian. Cimmerian has many friends. 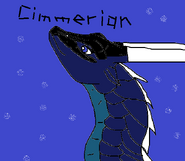 By: Cimmerian the Nightwing (I know its awful, but I try)

By:Cimmerian the NightWing1 (still awful, and tiny, I know)

By: Cimmerian the NightWing1 (By now all i can say is don't judge and keep your eyes looking at the good ones, aka. Subject's and Infinity's, and I am sorry if I made you feel as if you need to gouge your eyes out) 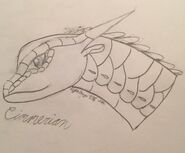 Add a photo to this gallery
Retrieved from "https://wingsoffirefanon.fandom.com/wiki/Cimmerian?oldid=2173476"
Community content is available under CC-BY-SA unless otherwise noted.