delicate is not synonymous with weak

Celestine is most notable for her color. She can be most simply called lavender, through the true shade is more complicated. Her scales have an iridescent sheen, multifaceted jewels embedded in her skin. Her main body is a shimmering lavender shade, pastel blues with undertones of pink. Towards the back, her scales fade more into the darker spectrum, richer, a shade best described as indigo. The gradient is slight, almost seamless, but a color change happens.

Small white freckles dot her snout, solid specks barely noticeable under the flashy colors around them.

Her underbelly is plainer, a simple pale blue, tinged with indigo. It's the same color throughout, unlike her plated scales. A similar color stripes her wings, alternating with a lighter, delicate sky blue shade.

Her wings themselves are slightly translucent, a light muted pink. It would easily be overlooked when compared to her flashing scales, even with the bright dawn pink staining the edges like ink on paper. Small streaks of white appear between the brilliant shades.

Her horns has similar properties to her scales, through more diaphanous, letting hits of background color through the light pink under direct sunlight. Her spines are gentle blue, exhibiting the same translucence.

Her eyes are dark blue, complementing the lighter shades coloring her body. It's as if she's the dawn herself, dressed in pale sunrise colors.

Her build is delicate, her snout thin and tapering, her limbs long with gentle curves. Her frame isn't sharp, or wiry. Petite is the best word to describe it.

The way she stands matches too. Her posture is good, but she folds her wings against her body, making her seem smaller than she already is. She keeps her tail close, her head down.

The way a normal SilkWing would act, so no one notices the lack of initials on her palm, the missing bronze band carved with her occupation.

Though no HiveWing would come close enough to notice, she has the faint smell of roses drifting around her, gentle and sweet. She seems harmless, a beautiful jewel that could be displayed, no more than another servant, though unusually beautiful.

And of course, they would be wrong.

Celestine grew up with normal parents in Cicada Hive, with both of her parents as gardeners. Celestine was sent to a school, where she didn't work well, and didn't get good grades. Her parents then sent her off to a school in a different hive, where she could learn about gardening and plants. Celestine didn't really like gardening and plants, and it sounded boring. When she was getting her job, she was happy about getting a different job. She became a teacher. But when Cele found out she was a teacher at a school that taught dragonets about plants, she was annoyed by this. Not even 3 days after she started working, she snuck out of the school, which was in Bloodworm Hive, she went to Cicada Hive to see her parents. Her parents were in shock when she told them what she did, and they told a HiveWing about this. The HiveWing forced Cele back to her job; a teacher. Celestine had to go back to Bloodworm Hive.

When she escaped from Bloodworm Hive after the bombing, she actually was fascinated with plants and how they took down Bloodworm Hive. So she wanted to become a gardener, but the HiveWings made her a waiter at a resturaunt in Tsetse Hive, Cele didn't like it. This is why she hates most HiveWings, and her job. However, she does still do her job, but still wants to be a botanist. 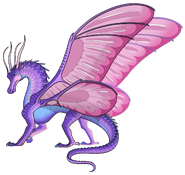 By Kindred!
Add a photo to this gallery
Retrieved from "https://wingsoffirefanon.fandom.com/wiki/Celestine?oldid=1900333"
Community content is available under CC-BY-SA unless otherwise noted.