Character belongs to Sby and Wolves. Don't steal/edit/use without permission. 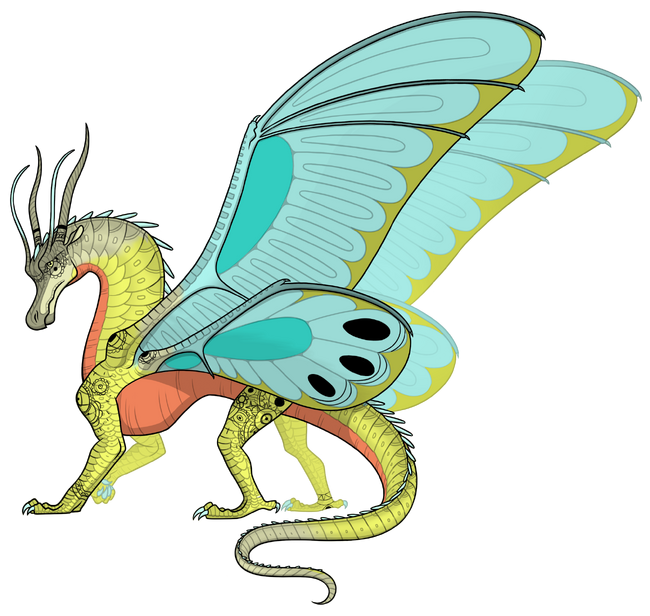 Celebrities need to look the part

If they weren't as famous as they are, no one would really look twice at Candle. They may be a hybrid, but you wouldn't really know unless they told you. They look pretty much like a SilkWing, with the huge and beautiful butterfly wings and thin body. They're average, honestly. Ironically, that's the best word that truly describes the accidental singing sensation.

Her mainscales are a vibrant lemon yellow on her feet and legs that fade to more of a parchment color closer to her wings, tail, and head. The end of their tail itself is a medium yellow, with a small blue bushy part at the end. Their underbelly is a burnt orange, with a very slight brown tint. Her wings are layered. The smaller parts of their wings are bright turquoise-blue, whereas the larger parts are more of a baby blue, with yellow tips.

Her eyes are bright yellow, like lightning. Candle has some unnatural markings as well, black ringlet tattoos that help them stand out in a crowd.

So much gained, but so much lost

Candle hatched ___ years ago as a female. She was a pretty quiet kid, and didn't dare upset HiveWings. She knew they were the authority and was terrified of disobeying them.

She met her best friend when she was two. They met at school, where they were inseparable from the first day. It didn't take long before they were as close as siblings.

As Candle grew older, she began questioning how she felt about being female. Sometimes she didn't feel like a girl, but sometimes she did. She asked her friend to refer to her with they/them pronouns whenever she could, but she/her was alright.

Their best friend, another SilkWing named Goldie, was a singer. An insanely good one, at that. It was Goldie's dream to be famous for her singing, and Candle supported her thoroughly.

Beetle: Candle likes Beetle... well, mostly. She thinks he's a great helper, and he calms her pre-show jitters a lot, and she's starting to think of him as a friend. However, sometimes they feel awkward around him, as he sometimes makes her feel like there's something he's hiding from her. All in all, she enjoys his company, but sometimes they just prefer to stay apart.

The most famous have the most to hide

Caption
Add a photo to this gallery
Retrieved from "https://wingsoffirefanon.fandom.com/wiki/Candle?oldid=1822002"
Community content is available under CC-BY-SA unless otherwise noted.