Normal HiveWing abilities, has a snaggletooth with paralyzing venom.

carries a bow and arrow

"Calm down, it's gonna be fine."
Calico is FeatherflightTheSkyWing's alt sona. Please do not use her without consent.

Calico looks similar to a HiveWing, with the same body shape and basic look. Her frame is slender and soft, with gently rounded curves and edges. Her eyes are round and pale gold, with a softness to them and a gleam of mischief that always dances in their golden light. Her scales are dappled golden, brown, and black, just like a calico cat's. Her underscales are yellowish white, and her talons are black, fading into ombre gold. She wears delicate gold chains wrapped around her horns and she has a wicked snaggletooth that hangs over her bottom lip. Calico's wings are SikWing shaped and pale golden.

Ohmygosh this is impossible XP. Well, Calico is silly, weird, chill, relaxed, and quite intelligent, though she does lack common sense most of the time. She's somewhat clumsy, usually because she is so involved in her imaginary world she forgets to live in the real one. Loud noises agitate her, because other dragon can't hear her talking. She is quiet a lot of the time, but quite a Chatty Cathy when she gets going. She is the voice of reason for her sisters, and she has a lot of wisdom, though she acts silly most of the time. She does not lose her temper often, and when she does, she feels incredibly guilty and apologizes a lot. Also, Calico can't stay mad for long. She always forgives the dragon she's mad at in a matter of minutes. In can be frustrating when she's trying to prove a point. Calico loves scrolls, especially fiction scrolls. Nonfiction bores her because it's too "Real". She dislikes things that are scary, especially horror films or books. And she adores animals! Cal will happily snuggle with any animal, real or stuffed XP. She has a tendency to be overpolite, apologizing a lot if she feels she's offended someone or hurt their feelings. Cal wants to be friends with the whole world, but she often is crazy over friendly and scares away potential friends. She hates other dragons yelling at her, and will most likely cry if anyone except her mom shouts or is angry with her. Cal can be a bit sensitive, but is good at brushing things off, unless yelling is involved. Calico LOVES to joke around, and things of herself as being quite the comedienne. Others dragons may not always think she's funny, but Cal tells jokes to herself all the time because she loves to laugh.

Luna- Calico loves her mother, obviously, but dislikes her recklessness. Calico thinks her mom should be more careful about hiding Calico and her siblings from the tribes.

Hawker- Calico is not as close with her dad, but obviously loves him anyway. SHe thinks he is too grouchy and desperately wants to prove herself to him.

Morph- Her sister is crazy, and wild, and imaginative, all aspects that Cal respects.

Honey- In Calico's mind, Honey is too reckless- just like Luna. Calico knows her main purpose in life is too keep Honey alive and well.

Dreaming and Mischief- Do they count as the same person? If so, Calico adores both of them! Dreaming is so friendly and chatty and nice and fun and (stops for breath). Calico likes Mischief also, but doesn't know her as well.

Fantasy- OHMYGOSH! Calico loves hanging with this fun loving dragoness, and they are definitely twins! They have so much in common! Like hugs and fruit and sugar and harp seals and animals!! Cal hopes to one day have as great OC's as Fantasy, cause she admires her so so much!

STUFFING HER FACE ON THANKSGIVING

every kind of fly

People that are rude about other's religion

when her hard work goes unappreciated 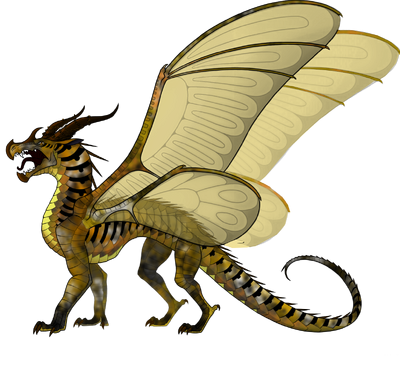 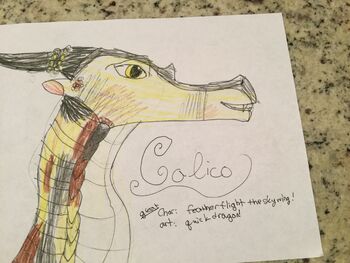 Retrieved from "https://wingsoffirefanon.fandom.com/wiki/Calico_(Featherflight)?oldid=1413435"
Community content is available under CC-BY-SA unless otherwise noted.