Major WIP! No touching this poor bae! When I mean no touching, NO touching!!! Belongs to Animal56, adopted from Cloud.

to save all the animals she cares for

What do you think of when you hear about a Sand/SkyWing hybrid? Ooh, burning firery blazes, and..and..floofy sail, OOH! Orange! But one little dragon named Calico.

Her mainscales are very... varied. Abstract splotches of pale yellow, dark peach, light peach, and regular ol' peach make her scales look like a piece of art. Although, there are some areas that are one plain color. Her underbelly is a light peach, her spikes are a pale yellow, and her horns are also light peach.

She has no Sandwing frill, but her spikes seem extra long. Her eyes are a hazelnut color, gleaming and hopeful.

Calli's structure is on the smaller side, despite from being from the two bigger tribes; and she's not lean, but not plump. A nice normal. Calico is not really musculared, but she doesn't mind much. Calli's talons are short and stubby, and her tail is thicker than a normal dragon's, with no SandWing barb.

Calico is more squarish, but her jaw has a defined edge. Her ears are real long, and she has really good hearing. Calli's voice is really quiet and soft, and smooth. She talks pretty normally, except the occasional stutter and Calico can't really pronounce her R's correctly.

Calico's mother and father met16 years ago, in the middle of the Great War. Calico's mother, Drop, was a scared SkyWing soilder, who only joined the army to keep her two little siblings fed. She knew she was doing something dangerous, but she was willing to do anything for her little brother and sister.

Meanwhile an angry solider of high ranking was barking orders at the rest of the army. "Sizzle, Lizard and Drop!" he yelled. The three dragons scrambled up to the front and saluted. "Yes, General Sunburn!" they yelled in unison.

Drop's heart well, dropped. A worried look spread across her face, and Drop tried to battle it, but the emotions took over. And General Sunburn noticed. "You scared, Miss?" he barked at her.

"'Aight. Then GO GET IN LINE!" he yelled. Drop leaned backwards and flicked his spit off of her face. Gulp! Drop made her way to the row of doom. She was next to Sizzle, and an unfamiliar SkyWing. "Hi," she said to the SkyWing, trying to make small talk. She was huge, and a dark red color was poured across her scales. "Hello," she said, still looking straight ahead. Drop felt like this certain dragon was going to be a big part of her life, but she had no clue why.

Then, the MudWings started to fill in on their side. A large MudWing appeared on Sunburn's side. "Sorry we're late," she said. "We had a little accident." she grumbled.

"It's 'aight, General Coywolf." he reassured her. What'd she do now? he thought, doing a large eye roll. Then, he noticed a jumble of greens and blues, about a hundred meters across the muddy grasses. "They're here." he said.

"Fun," replied Coywolf. The two walked to the front of the lines. "Attention!" Coywolf yelled. All eyes turned towards her. "We can not loose another battle! We have fire, and they do NOT!" she pointed at the SeaWings.

Sunburn rolled his eyes again. "Coywolf," he sighed. "There are SandWings fighting for Blister."

"I know. But not as many," she smirked. Sunburn rolled his eyes again.

"What we are trying to say is that give it you all today," he said calmly.

"FOR BURN!" chanted the soldiers. As soon as all was silent, the warring tribes staring at each other, "CHARGE!" screamed Coywolf. And the SandWings, MudWings, and SkyWing dashed at the poor, innocent, surprised SeaWings and SandWings.

It was a bloodbath, many poor dragons died that sad, sad day.

Lives were lost. Drop was almost one of them. She was fighting, not very good, though. She was very cautious with every little move. Drop swiped at others quite gingerly, closing her eyes real tight, her head turned away.

A large, bulky SeaWing noticed Drop fighting ever so carefully, somehow surviving bloody gashes and ear piercing screams. Take the easiest one first, he thought. He dashed to Drop, and BLAM! He landed with a huge thud, dead on the ground. What the heck? Thought Drop, only to see General Sunburn standing there, staring at the dead body.

"You saved me, General," said Drop.

"My pleasure," he smiled. Drop looked down at the ground, looked back up, and smiled shyly.

Burn's army ended up winning the battle that day. Next, the troop traveled to the Sky Kingdom to celebrate with Queen Scarlet and Burn. They had collected a good amount of prisoners, destined to battle in Scarlet's arena. "Come on, camel brain!" yelled General Sunburn, tugging along a feisty bright green SeaWing prisoner. Drop was right by his side, holding a rope with another SeaWing tagging along with it.

This took Drop by surprise. "uh, yeah, that would be great," she said. And he did. The two went to an elaborate restaurant in the nearest SkyWing town. Drop was pleased she missed seeing the arena battle, too much gore and blood for her.

This went on for as few months, and evetually, Sunburn and Drop had an egg together. It was splotched with all sorts of shades of peach, looking quite odd. Drop was as happy as she could be. Sunburn was taken by surprise, and hated it. "I Don't want to raise a hybrid!!!" He yelled at Drop.

"Sunburn," she tried to soothe him.

"NO!" he yelled. "I WILL NOT HAVE IT!!" he stormed out of the nice house they had been living in, and his tail knocked into the egg. It rolled over again and again, and Drop was scrambling to catch it. Drop leaped over the egg and caught it safely.

Over the next years, Calico attended public school. There was one problem, she was an easy target. She was only in the second grade when it started. She walked into the classroom and was about to open her cubby door, but walked over to chat to a friend. (One of the few) Calli walked back over to her cubby, #12, and open the door to put her stuff inside of it. Glop!

"Ewww!" Mud had spilled out of her cubby and she was covered in it. The whole class started to laugh. Bellowing. "Oh, dear..." said her teacher, Miss Antelope, trying not to burst out laughing, like her students. "...Pfffttt... Uh...(chuckle)...go to the nurses' to get...cleaned up..." she finished, motioning her towards the door.

Calico walked through the halls, but thank the Moons that it was an elementary school, where nobody was switching classes, so nobody saw her. As she walked into the nurses room, the nurse looked as if she knew exactly what happened. "You just step outside, dear. I'll get the water."

Calli walked quickly outside the door, and saw a flicker of a shadow in the woods. What was that? Calli tip toed towards the bush. She pulled it away, to find a little injured squirrel. "Aw, poor thing," Calico sighed. "I can't just leave it here..." So, Calli grabbed some leaves, mud, pinestraw, and whatever she could, and fixed the little squirrel's leg. It sat up, looked upat Calico, and scampered off as if it had never hurt itself. "Wow, I did that," Calico said, to herself. She felt proud. She felt happy. From that day foward, she knew she wanted to be a vetrinarian. 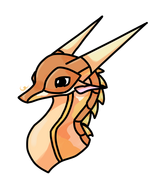 by Cloud
Add a photo to this gallery
Retrieved from "https://wingsoffirefanon.fandom.com/wiki/Calico?oldid=2118810"
Community content is available under CC-BY-SA unless otherwise noted.