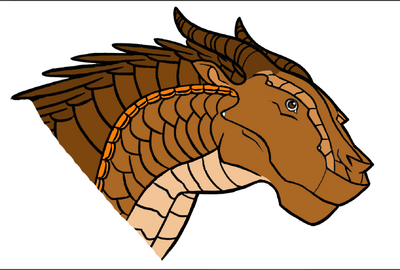 To make protect his last sib, since he already lost enough of them. Now he only has Akemi.

Kay (by his sister, Earth)

His sister, eating food, using his weapons for something, and trying to look like a hero. He is also fond of small dragonets

Scavengers, rain, and is insecure about some dragons. He also dislikes eating fruits and veggies like most dragons.

“It’s not that hard to get the concept. You haveto protect what is left.”

Please do not edit my page except for categories. This page is currently owned by Pandee!!

Caiman is a MudWing who currently raises Akemi after his last sib died. He currently lives in the Kingdom of Possibility.

Caiman is a burly dragon, due to being the oldest among his group of siblings. He has light brown scales, and a peach-colored underbelly. He also has amber-brown eyes, and his right eye is disabled due to being stabbed by a scavenger. In some versions of art, his eye is shown as stitched. On others, his eye is simply pure white. His right back leg has a scar from being impaled by a scavenger spear.

He is usually seen with a serious expression, and will often look around. However, he gives friendly smiles to passing dragonets. Caiman also has a carry-on bag slung around his shoulder.

”I’ll be the greatest guardian ever.”

As anyone expects in a BigWing, Caiman is supportive and can defend his siblings. He is rather cooperative and fierce, leading out attacks and hunting plans. And he is kind and generous, in order to let his group thrive and live happilly ever after. He’s a good soul that way.

But ever since that day most of his sibs died, he grew a little uncomfortable. He struggles to make choices, and is whether he can keep his last sister alive or not. Caiman is weighed down by the past, despite living in a safe condition right now.

But how would dragons describe his overall self? The one over his insecure side? He is still supportive, especially to little dragonets who need care. He believes that the world depends on dragonets and helping them, so he volunteers to dragonsit and teach time. Time through time, he would offer one food or a nice toy to keep. He had kept this trait from helping his sibs, which he deeply remembers. Still, a sight of a kid calling him a great guardian would make him upset. It really is a heartwarming and bad memory stab.

Cooperative and with great leadership skills, Caiman is good at leading others. No wonder the queen of Possibility had him in charge of palace work. His loud yet considerate voice would motivate others to work, although he cannot deal with stubbornness (his sibs were highly loyal and would not disobey).

”You know, I hadn’t been here my whole entire life. I just led my peers here, that’s all. But I never knew that there would be something that’s actually a home.”

He was the BigWings of his group of sibs, so he supervised them whenever they go somewhere new. Together, they used to toss things at old dragons to sleeping together ipby the mountains. Their group didn’t last. Caiman regrets the biggest mistake of all, the one when he was seven: Trying to destroy a scavenger den for the fun of it. His little brother wasn’t careful, and had a loud death which lead to a full-scale fight against the scavengers.

They were stronger than he thought, and Caiman offered to fight for his siblings. However, his four sibs weren’t lucky at all, and all died. He only escaped with his last sister, Earth, and he didn’t want to see another scavenger since. But when he does, he kills the creature on sight; but not caring about vengeance or so against them. He understands that scavengers were just like any other creatures—defending themselves because they must.

As he wandered around the outskirts of the Mud Kingdom, he found a one-year old hybrid named Akemi. Realizing she was parentless as of now, he takes her under his care despite Earth’s suspicion. Perhaps he just wanted to make her feel safe, but Earth wanted herself to be his first priority. Still. he knew that he can’t get anyway in life by doing nothing, so he decided to go for the Kingdom of Possibility. Althought the kingdom was unwelcoming to most dragons, they had a feeling that Caiman was trusting. They knew because he had a hybrid under his care, and knew that he had no bad intentions.

Where is he today? He’s a palace work leader in Possibility, helping the queen carry out orders for her workers. He part time dragonsits orphaned dragonets, and announces arena battles. His sister Earth is now a queen after thirteen years of staying, and will rule Possibility for as long as she can live. 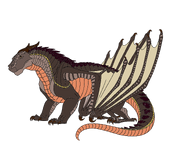 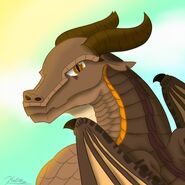 By Sab!!
Add a photo to this gallery

Retrieved from "https://wingsoffirefanon.fandom.com/wiki/Caiman_(Pandee)?oldid=1790422"
Community content is available under CC-BY-SA unless otherwise noted.