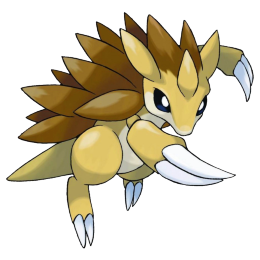 Burrow belongs to Piggyxl. Please don't edit or steal without permission. Coding by Cloud the SeaWing.

Burrow definitely stands out in a crowd but not as much in Sanctuary. A good amount of SandWings and hybrids live there and at a first glance she might seem like an odd SandWing. But if you look at his neck spikes, pointed jawline, talons, and wings, you'll definitely realize she's part Icewing. Her back scales are thick and hard, which she inherited from her Icewing father. Her eyes are nearly as black as the eye of onyx, but if you look closely, you'll see a light amber looking back at you with hostility. Her overall stance is low to the ground and looking around. Her talons are abnormally long, close to the length of the spikes on her neck band. Her neck band is from a coyote’s skin, stripped of all the fur. She then stabbed spikes that have shedded off her to make a threatening accessory. Her fierce and vicious appearance is often laughed at due to the fact that she often jumps at the slightest noise and curls into a ball. Because of this and the laughs she receives, she becomes even more hostile and if you catch her on a bad day, instead of curing into a ball, she'll slice your throat with her serrated talons.

Burrow is not a dragon to be messed with. Due to the majority of the dragons in Sanctuary laughing at her for looking fierce but being a coward, she has become vicious and relentless over the years. She is quick tempered and deceiving. Burrow often strays away from other dragons unless purchasing from merchants, in which case she sometimes barters the prices or, more likely, threatens the merchant to sell it to her for a cheaper price. The combination of her Sandwing and Icewing features, her ears are very sensitive and cause her to jump at the smallest sound. When talking, she never beats around the bush. She gets to the point as quickly as possible without any unneeded detail. Often referred to as a smart behind, she has become very egotistical of herself and believes she’s better than anyone.

As a young dragonet, her parents split up and her mother, a Sandwing, took Burrow with her to life in Sanctuary supposed to the border between the Desert and Ice Kingdom. Burrow, not wanting to cause trouble was very compliant with the plan even though she was only 1 Dragon year old. (10 in human years) Her mother and her lived together near the outskirts of Sanctuary and she raised Burrow to learn how to buy from merchants and make a living.

At the age of 3 (13 in human years), her mother sent her to school. Burrow, on the way to the local school, walked near an odd spiked ball. Being a curious dragonet, she tried to pick it up to get a closer look, but accidentally stubbed her talon on a rack and in the shock, set the ball of fire. It exploded instantly, causing many building around her to collapse. She curled into a tight ball out of fear which saved her life due to her hard back scales. She was badly injured and many of the roots of her spikes were greatly broken causing one or two to fall out every year.

Many years passed and Burrow refused to go to school due to her PTSD from the explosion. Her mother gave in and taught her at home. Her ears became very sensitive, even more than before, and even the slightest unexpected sound causes her to curl into a ball.

Her mother passed away when Burrow was 7. (17 in human years) Many of the dragons in Sanctuary jokinging call that year “The year that scared dragonet evolved” Burrow became more hostile, more defensive, and willing to kill other dragons. Her large talons that used to cause her to trip became her murder weapons to slit the throats of those who laugh at her. Many call her dangerous and overreacting which usually winds them up dead.ds them up dead.

Burrow’s parents are a Sandwing (Ground type) and an Icewing (Ice type). These reflect on the Kanto and Alolan forms of Sandslash 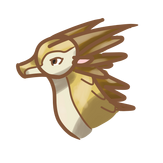 By Yinjia
Add a photo to this gallery

Retrieved from "https://wingsoffirefanon.fandom.com/wiki/Burrow_(Piggyxl)?oldid=2106530"
Community content is available under CC-BY-SA unless otherwise noted.