Please do not steal or copy him, seeing as Bulb worked very hard on him.

-Coding is by @Feather the Everywing-

To gain as many friends as possible, which is hard for him

Buck, though he hates it deeply

Tries to have little to none, although it is hard.

People who take advantage of the weak

When he sneezes, his green scales glow. Not kidding. And he sneezes like a kitten.

He can throw a book? That's as deadly as he's willing to get.

Bucket is a friendly, awkward, clumsy Seawing dragonet. He has a few friends, but not many. Bucket got his name from when he first hatched. He was playing around and got his head stuck in a bucket. He then proceeded to bump into walls and fall over blindly. So, yeah. His name was born out of clumsiness. That set the bar for his whole life. Bucket would constantly stay clumsy, but became more curious. He cracks jokes at the absolute worst times and reads whenever there is a book in presence. Not an exaggeration. He likes anything art and hopes to become an artist, but he is stuck in the profession of fishing due to his families hopes for his future. Bucket carries a leather brown satchel over packed by books. He's constantly ranting about the history of Pyhrria and how the textbooks got it all wrong. He'll sketch sometimes, and is good at art, but never admits it. He'll constantly be writing down book ideas, seeing as his ideal profession is author. He keeps track of his dreams, and always is trying to decipher them. He is addicted to peanut butter sandwiches, and eats them at every lunch. He is opinionated on controversial issues, and sometimes likes to speak up for LGBT+ rights.

Bucket has all the regular dragon abilities, but can't breathe fire. And he has the very unfortunate drawback that his green scales light up when he sneezes, and got the nickname "Flashlight" from a young age. To quote Bucket, "I'm a walking lantern." He can fly, but that doesn't mean he's good at it.

Bucket is a regular size for a Seawing dragonet, with a not so muscular buildup. Unlike most Seawings, he does not have the green dangling beard-like bump under his chin, and instead has a string of small webbing connecting his chin to his neck.

Bucket was born an only child to two seawings. The father was a fisher named Wave and the mother named Tide. They lived in a small underwater cave, and he gained some friends. He read a lot of the time, due to his shyness, and he developed a slight case of being a bookworm.

Seth - Bucket mostly hangs out with Seth. Both share similar interests, extremely close friends, and maybe more than that.. They geek out together whenever possible, and Bucket listens to all of Seth's crazy theories.

Mace - Bucket always laughs at Mace's jokes, and admires their sense of humor. He secretly takes notes from Mace on how to be a better comedian.

Cimmerian - Bucket and Cimmerian are close friends. He can relate to her, and they talk and joke around a lot.

Peak - Bucket tries to keep up with Peak, and likes to make art with her.

Ridge - Ridge and Bucket are friends, but don't totally know each other yet.

Sigyn - Bucket and Sigyn hang out a lot, and both try to keep up with each other.

Destiny - Bucket admire's Destiny's art and is friendly with her, but tries not to cross her.

Rain - Bucket is nice with Rain, but not super close. He has a good relationship with her, but doesn't have anything more. Bucket would like to longkwith Neptune very well, and they hang out quite often. now her better.

Moonivy - Bucket is cicely.tantly geeking out about musicals with her. In the Modern Futuristic Phyrria timeline, he's closer and texts her a lot whenever he's bored and spams her with Tumblr posts.

Bucket is as you would expect him to be. Addicted to his computer. Whether it's games or chat rooms, that's where a lot of his friends are. He listens to music a lot to avoid awkward conversations. He has a Tumblr and listens to musicals all the time. 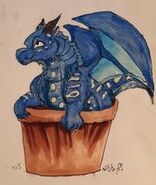 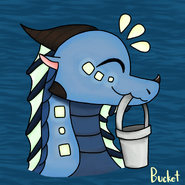 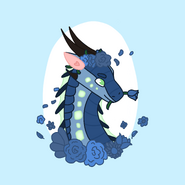 Bucket by BeePlus
Add a photo to this gallery

Retrieved from "https://wingsoffirefanon.fandom.com/wiki/Bucket?oldid=1707511"
Community content is available under CC-BY-SA unless otherwise noted.