Hi, everyone! I'm SandWing, and I'm new here! I read the rules twice, and I hope I didn't break any of them while making this character(he is my first ever)!

I really want constructive criticism, or just plain criticism, so if you have any, please comment so I can fix it! Is he overpowered? Too perfect? Please tell me! And if you want to help develop this page, that would be greatly appreciated!

Also, I would appreciate it if you didn't use him without my permission. It would be okay if you did, but please don't. Thank you! Same with editing, unless it is something like a grammar mistake or adding him to those category things.

I can't thank Heliosanctus enough for all of the coding instructions! Thank you so much for taking the time to explain! Also, I would like to thank Waffle for choosing his theme song on request!

Finally, if you have any idea of what his theme song could be, please tell me, because despite Brush's love of music, I myself don't know the slightest thing about it. :P

Brush has the barbed, scorpion-like tail that all SandWings have. He usually keeps it curled at his side, so it doesn't scratch a dragon by mistake. He has pale, sun-colored scales that radiate heat, another typical SandWing trait. He has a wide, toothy smile, and his eyes are jet black and glittering. He is tall and lanky, with long, skinny legs ending in sharp-clawed talons. His snout is short, as are his pale, curved horns. His tail is average in length, but unusually thin, causing the barb to appear disproportionately large.

Brush is friendly and talkative. He doesn't like silence, and does whatever he can to keep a conversation going. He tries to be honest, but there are some secrets he just has to keep(shhhhisfullnameshhh). He can be easily upset if dragons point out his flaws. Courage isn't exactly his thing, but he isn't a coward, either. He just dislikes fighting, and enjoys peace while it lasts. However, if his friends are being bullied, he will step in. Never with tail raised and teeth bared, but he'll ease himself between his friend and the other dragon and do his best to break it up with words.

Brush hatched to a pair of SandWings, his mother an Outclaw, his father a commoner. They lived in a neat little home, bordering poor but almost managing to scrape by. Brush's mother, Corsac, told him stories of the Outclaws, and the young dragonet was thrilled by the tales of the tough outlaw dragons. Inspired, he began playing with a prey bone after each small meal, imagining it was his spear and he was guarding an oasis in the Scorpion Den. He enjoyed it so much, Corsac was sure that he was going to be an Outclaw as well.

But three months after Brush hatched, Corsac was caught and imprisoned by SandWing soldiers for harboring knowledge of fellow Outclaws, many of them infamous, wanted thieves. She was sentenced to life in prison after the SandWings failed to torture information out of her. Brush heard nothing of this, for it broke his father Lithurge's heart to tell the dragonet the truth. He didn't know that it hurt Brush even more when he told the young dragonet that Corsac had left them to rejoin the higher-ranking Outclaws, whom she was forced to leave when Brush hatched. When he heard this, he was devastated, blaming himself for taking Corsac away from Lithurge. He quit his rowdy games, wanting nothing to do with the Scorpion Den dragons.

Lithurge raised the him alone, barely struggling along at first. A weaver of tapestries, he was little known and sold few of his drapery. But he received a brief stroke of luck when several upper-class dragons noticed his skill. He became quite popular, and was soon creating fine works of art for the palace. Brush was always at his side, wishing he could be as good; he lacked Lithurge's thin, nimble talons. But despite his lack of skill, his father was so known that Brush was one of the five lucky SandWing dragonets chosen to be enrolled in Jade Mountain Academy on the year he turned four.

At the school, he befriended first his RainWing and SkyWing clawmates, then the rest of his Winglet, save the NightWing, who has not yet let down her guard. Brush continues to live at the academy, and is an average student.

"Hmm? Oh, yeah. I miss the desert sometimes. But I like it here, and I've made a lot of great friends that I would never give up for a little sun!" 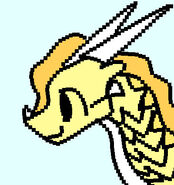 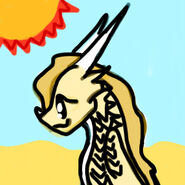 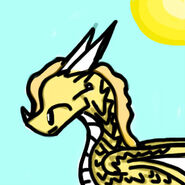 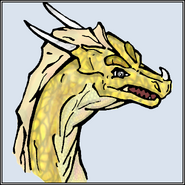 By Helio
Add a photo to this gallery
Retrieved from "https://wingsoffirefanon.fandom.com/wiki/Brush?oldid=2082105"
Community content is available under CC-BY-SA unless otherwise noted.