Note: Not the canon Bromeliad.

To help the world understand Subzero

Bromeliad is the one that you will immediately think, "Whoa," after seeing him. He's rather short and plump, but the way he holds himself is impressive. He always has his wings spread out for extra attention, and his head always has a thoughtful tilt to it. He holds himself tall, not that it does much, but it does give the feeling of happiness. This smart position causes him to stand out from the crowd.

His scales are usually a bright pink and yellow, with some purple mixed in. His wings always are changing color, even in his sleep. They usually switch between neon green and blue, but they do move all around the color spectrum.

His scales also sparkle after spending so many days polishing and washing them.

His eyes are a dark blue, the one non-sparkly thing about him. He likes this, as it shows how thoughtful and smart he really is.

He usually wears a smile, only ever reducing to a frown, or even just a neutral face when he is insulted or there is a death.

Overall, he can be described as sparkly.

On the outside, he seems like a completely vain dragon with zero seriousness. He's pretty hyperactive and picky, and most dragons hate him. A typical Rainwing really. Only those who really know him can actually like him.

On the inside, he is smart and stubborn. He's hidden this fact from the Rainwings for years, thinking he wouldn't fit in, but after Glory became queen, he's started letting his real self show.

He loves attention, thinking it makes him feel wanted and needed. Its something that makes him happy, and other dragons know this, sometimes giving him fake attention. This annoys him, but he still likes it.

To say he's not happy is a lie though. He hates sadness and pushes it away as much as possible.

He also hates sticky things for no particular reason. He just can't stand them, and would back away from anything sticky.

He also loves food. He's always hungry, and it is incredibly common to hear him muttering about food under his breath.

A waste of a brain.

Bromeliad hatched just like any other Rainwing, in the hatchery. What wasn't normal though was that he wasn't ever taken out of the hatchery or named. He had been hiding in a corner out of a panic after he saw the caretakers take away the other dragonets, thinking that they were going to eat or kill him or something.

He continued hiding everytime the Rainwing came, learning his camoflauge pretty early because of this. He had also tried to convince others to hide with him, but they never agreed.

When he turned 2 months old, a Rainwing finally found him and brought him back to the village. After his initial shock that he wasn't dead, he realized that he was a lot smarter than the other dragonets in the hatchery. They didn't know how to control their scales yet, whereas he already could hide well enough for no one to see him.

Having only been brought to the hatchery with he was 2 months old, he was taken to school a year after he should have been, despite him having proven multiple times he was smarter than the others. This caused him to love learning, everything from tree gliding to memorizing fruit.

Being a year late to school, also caused bullies, but he never really cared about them, and they eventually just stopped bothering him. He was the best in not only his class but also the classes above him.

The Rainwings began to actually respect him, and he was the first one to actually notice the missing Rainwings, and told Mangrove how many were gone.

After Glory became queen and brought in some scrolls, Bromeliad and a few other dragons started the first ever library in the Rainforest and he became an assistant librarian for it. He went to Jade Mountain to learn when he turned 11 as a temporary replacement to Sora until they could get another student.

He only stayed at Jade Mountain for a couple of months, but he did become a lot smarter and learned a lot more about life outside the Rainforest. He returned to the Rainforest to attend a new academy that had opened up there and continued as a librarian.

At this time, he also had met Clearsnow on one of her visits to Jade Mountain, and learned about her sister Subzero more in depth and realized that she wasn't the monster everyone thought she was. So on Clearsnow's sixth hatching day, Bromeliad found Subzero.

At first, Subzero didn't let him into her life, being scared of herself, but he wouldn't give up, wanting the world to understand her. When she finally let him in, he had the happiest year of his life. He also became one of the best students at the Rainforest Academy, and was studying for one final exam until he could become a teacher, his goal in life. Everyone said that he would pass, but one day when he was studying...

Subzero had been with him, and she had been laughing and talking with him, when she suddenly stopped. Bromeliad hadn't believed in her visions, and just brushed off her cry for help, being to immersed in studying, when suddenly the fire started.

It had burned down the library so fast, being made out of wood and papers, that Bromeliad hadn't even a second to escape when the flames consumed him. Subzero had made it out, but he wasn't so lucky. He still didn't believe Subzero caused the disasters, but as he was dying, he wondered if he was wrong...

The Rainwings had mourned the lost of their best brain, and banished Subzero.

Everyone likes and hates him.

Subzero(Love): Bromeliad really does love her, and she had brightened up his life. Their personalities were pretty similar, and they got along really well. He had honestly believed they had a future together, and one of his last wishes was that they did. He never believed in her powers. Despite their age differences, it still was a good relationship, and even his slight hesitation at the end of his life, he still likes her. (Very Positive).

Clearsnow(Friend): Bromeliad likes her, and they did become pretty good friends, both in support of Subzero. He had always wished for Clearsnow to have a better life that Subzero did, and hopes that she can help Subzero. (Positive)

"So...how was Subzero today?" -To Clearsnow

Scourge(Head Librarian): They have a...complicated relationship. You can't say Bromeliad hates him, but he doesn't like him either. Scourge had never like him either, giving him the lowest jobs, but this was for his "protection" so other dragons didn't bother him much for his brains. Bromeliad appreciates that, but it still did hurt. (Neutral)

"Aarrgghhhh. I don't want to be the janitor. Come one."-To Scourge.

Physical: He's pretty good at tree gliding, but average/below average in everything else.

Intellectual: He is very smart. 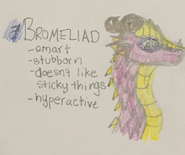 By Droplet!
Add a photo to this gallery
Retrieved from "https://wingsoffirefanon.fandom.com/wiki/Bromeliad?oldid=1833275"
Community content is available under CC-BY-SA unless otherwise noted.