In my flat all alone

How I hate to spend the evening

Brimstone is one of five of my major characters, meaning that she is very important to me. I would prefer if you didn't edit this page at all, without my permission. Please ask before you use her in a fanfiction.

Autumn winds blowin outside the window

As I look around the room

And it makes me so depressed

To see the gloom

Brimstone is quite a bland dragon, in terms of colouring. Her main scales are a shade of forest green, and as the scales rise to the spikes they get darker, but don't eventually become black, as it is impossible for purebred SilkWings. Her eyes are lime green. Her underbelly is yellow, and she has a shimmering shade of purple on her wrists and her snout. A lot of other SilkWings saw this as ordinary and 'boring to watch'.

But as soon as her wings came in, her appearance changed altogether. Her wings were a green, lighter than her body, with bright yellow stripes near to the edges. Small brown patches hung on the edges of the wings, and a brilliant dark purple is dappled, creating a mesmerising pattern. The edge of her wings is tinted with a purple splash, and dragons who've seen her wingless regret judging her in the first place.

There's not a soul out there

No one to hear my prayer

Brimstone, upon the first time meeting her, appears to be an extremely grumpy dragon. She despises HiveWings with all her life because they killed her father and captured her mother, and also tried to capture her, only because of her beautiful wings and delicate flamesilk. She would quickly and instantly attack a HiveWing if they dared to bother her, and she would threaten to use flamesilk, but at the same time she needs to keep it secret, otherwise the HiveWings would try to put her in the flamesilk factory.

However, if you are not a bothering HiveWing and would like to know her more, it's always best to do so. Brimstone will act very kind and calm towards close acquaintances, and has no opinion on dragons she doesn't know well enough. However, it might be hard to keep the relationship; Brimstone can sometimes get into a fight, usually being the dragon to start it. Many other dragons don't understand her behaviour.

Currently, though, she has 'gone insane' and would literally kill any HiveWing that got too close to her.

Won't somebody help me chase the shadows away?

Take me through the darkness to the break of the day

When Brimstone was young, she lived with her parents, Chalkhill and Buckeye, in Cicada Hive. Back then she was rather fascinated by the HiveWings and also had a little interest in LeafWings despite the myths. She went to Silkworm Hall and enjoyed learning there, however some nasty male SilkWings there called her 'boring' and 'ordinary'; their scales were splashed and swirled with colours while Brimstone's were... plain.

Brimstone loved her parents so much. Chalkhill, having to keep her flamesilk secret, worked at a dragonet care home for abandoned eggs and dragonets. Chalkhill would take Brimstone to the care home so that she could meet some dragonets there. And her father, Buckeye, was an artist. He would paint vibrant pictures of animals and dragons, and her favourite piece of artwork was a sunset, with the silhouette of two hives and a pair of SilkWings flying in the sky, which represented her parents, along with the shadow of herself flying with her own wings. That was what the future should've been like, if it weren't for the HiveWings...

One night, a few days before her Metamorphosis, a large swarm of HiveWings arrived at Cicada Hive to check for a flamesilk dragonet. Believing that she was going to be a flamesilk, due to Chalkhill being an escaped one, they questioned her parents while Brimstone hid in a tight corner. When they replied with a "N-no", they killed Buckeye in front of her eyes. They had plans on killing Chalkhill too, but they found out she was a flamesilk so they took her captive (most likely to the flamesilk factory), never to see Brimstone again. This forged her reputation for injuring others.

When Brimstone checked her wrists a day before her Metamorphosis, they were shining with a faint golden glow and were prickling her talons. She knew it was flamesilk from what her mother showed her, so she kept hidden from as many HiveWings as possible, and made it to a cave to have her Metamorphosis. She used the flamesilk she weaved for the cocoon to burn off her wristband.

Upon emerging, she had grown her wings, which were beauty compared to her scales as a dragonet. She managed to make it back to Silkworm Hall to show off her new features, and the boys who were teasing her changed their minds and said she was really pretty. Although she felt better upon receiving the compliment, she still had a vigorous temper and could attack at any moment.

When she grew older, she decided that the HiveWings were enough. Several times they tried to capture her, take her to Misbehaver's Way for no good reason, and there were even some murder attempts, but none were successful. Sometimes it was just pure luck, other times she fought (and maybe killed) the attacker, she would often escape their reach, and occasionally other SilkWings in the area would help fight. She became wanted for her crimes because of escaping Queen Wasp's talons and killing many HiveWings, and wanted posters were put up on each and every hive.

Her reputation eventually grew, and she became more murderous, more willing-to-kill than ever. To this day she continues to kill HiveWings who endanger her in any way, and she is currently on the run in Pantala, looking for her mother. In other words, we can say that she went insane after watching her father get killed and her mother being dragged away and many, many HiveWings die under her fiery silk. She does, however, act calm towards other SilkWings, and feels sympathy for young dragons sometimes.

On the end of the rainbow

With a fortune to win

It's so different from the world I'm living in

I open the window

And I gaze into the night

But there's nothing there to see, no one in sight

Ask for relationships! Pantalan dragons only

To Brimstone, Chalkhill was the best mother a SilkWing dragonet could ask for. Brimstone loved everything about her (except her raised voice); she also enjoyed going with her to the Dragonet Care Home to meet tiny hatchlings and watch HiveWings buzz around and SilkWings chase each other. Since Chalkhill was captured, Brimstone has been searching every prison for her, killing any HiveWing that got in her way.

He may have been lazy, but Brimstone's father was worth loving and valuing. He painted many incredible artworks of landscapes and animals, and young Brimstone loved to watch how the paintbrush glided across the canvas while Buckeye illustrated a frozen image. Since the HiveWings killed him, Brimstone feels extremely hurt, and with every HiveWing she kills she thinks of her father's face.

Brimstone has heard about Ptery and how he loves to stuff SilkWings and put them in his collection. Because of this she feels very angry and also bad for the SilkWings who experienced this. She could kill him if she tried, but she's too scared that he would kill her first, so she tries to avoid him at all times.

There's not a soul out there

No one to hear my prayer 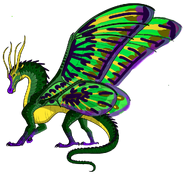 (OLD) Ref by Joy Ang, coloured by me

By Quail!! (ghgnghhgnghhg i love it)

Buckeye's Death by Reverb!
Add a photo to this gallery

Won't somebody help me chase the shadows away?

Take me through the darkness to the break of the day

Retrieved from "https://wingsoffirefanon.fandom.com/wiki/Brimstone?oldid=2519461"
Community content is available under CC-BY-SA unless otherwise noted.