antisocial guardian of the sea

Bri is a tall, wiry young dragoness, with long limbs, and bony appendages. Its hard to tell what kind of tribe she belongs to, her scales are a pale cream, while copper mixes as well. Her tail is elongated, her wings are crooked and bent, while her ears perk up, and are a bit longer then a usual dragon's. Shades of ochre fuse along her body, and dark brown freckles spatter along her shoulders, cheeks, neck, arms, and wings.

Bri's eyes are almond shaped, large, and curious. With bright enthusiasm, and take in the shade of shimmering clovers. Also, a curly, thick, untamable mane of crimson locks fall around her face.

Henna tattoos adorn her wrist and forearms, also along her curved, white horns.

As far as jewelry goes, she body seems to glimmer entirely with it. Hoop earrings, wire chokers, beaded anklets, and sea glass necklaces drape along her body. While strange cuffs of lapis lazuli wrap around her fore-arms, and many rings of all shapes and sizes decorate her slender talons.

As you walk along a secluded area, you might catch a glimpse of a strange, bony, copper, and freckled dragoness. A long, white dress flows around her lean body, and her emerald eyes shimmer with mystery. You try to approach her but she makes a startled gasp and slips away as quietly as she came.

Bri is a strange dragon, full of life, depth, and curousity. She is constantly asking questions, tinkering with metals, and reading. She loves driftwood, swimming, and the ocean. She is also quite the introvert, she loves being around other's but she has a lot of shyness. If she's brave enough to overcome that though, she's talkative, and glad to talk about her many theories, if the dragon she's speaking with likes it or not.

Bri knows most think she's weird, point out her difference, and call her names. Inside she wants to lift her chin and march away, instead she sobs silently and slips into shadows.

She feels alone around others, but when she's alone with nature, she feels at home. She enjoys swimming, stargazing, beading, and singing old folk songs into the salt winds.

Bri is a sea witch through and through, due to her mum and grandmum being them. She's quite good at brewing potions for confidence, health over colds, energy, better singing, and hair color changing. She can also weakly foresee the future due to her father being part NightWing. But she's not that good at that...

Bri is pretty loyal, intelligent, and full of random interesting facts. She is also quite useful with her potions. She longs for a friend, but kind of disregards romance. She's not into that, and is kind of a feminist, though she wont admit it...

Deep inside, Bri's wild at heart. She loves nature, the plants, the sun, the stars, and the creatures. She knows most dragons think she's strange, and needs to be normal to fit in. She wouldn't be normal for all the treasure in Pyrrhia. Bri feels trapped when around dragons who want to change her. It makes her want to tear away and run, run as fast as she can. She wants to feel the sand beneath her talons, and smell the vines of lavender. To taste the salt sweet air, and see the waves crash around her. That is freedom. And even if the price of freedom is loneliness, she wouldn't have it any other way...

Bri comes from a sea witch mom, and a geologist dad. She grew up living on Finnerbreak, though her parents feared her powers would cause fear in other's so they shielded her from others. All her dragonethood she stayed secluded in an artsy beach hut, with mildly overprotective parents, lots of paint, and the longing for a friend.

Often she'd go by the docks of Finnerbreak when no one was watching and talk to the waves, strangely, they moved to her voice. She soon learned she could make them dance, splash places, and watch her, only her. And the sea seemed to understand her, bobbing and nodding, and playfully splattering her with droplets occasionally. But nothing last forever, one day a few dragonets her age saw her moving water into the shape of a porpoise, they screamed, before she could explain. They yelled at her, calling her "freak" and "monster", and rushed off to tell their friends. She reliazed not many could talk to the sea, and she reliazed the sea would be her only friend from there on...

Bri in chibi mode, by moi 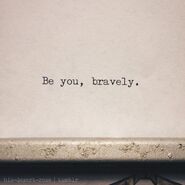 Sloppy fullbody sketch by me again

Were-Bri, by guess who...
Add a photo to this gallery

Nell ~ Bri really, really likes Nell, and believes she's very unique, sweet, pretty, and awesome. She loves mostly everything about the kind hybrid, and really hopes to become a friend with her.

Bri thinks Nell will be the best Lady ever, and is totally planning on coming up with some cool helpful spells for her.

Retrieved from "https://wingsoffirefanon.fandom.com/wiki/Bri?oldid=1650222"
Community content is available under CC-BY-SA unless otherwise noted.