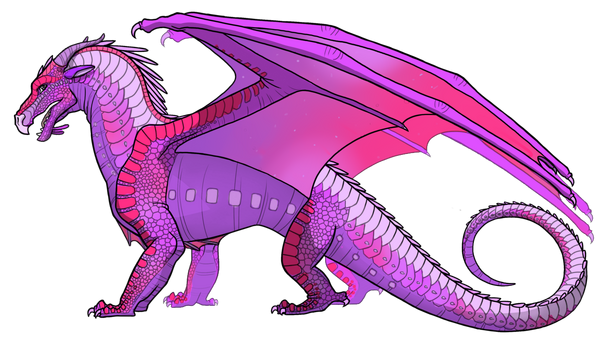 mortally terrified of any pink other than herself and salmon

Unknown, but it is possible that she’s enemies with a certain pink dragon.

”There is no need. Your dragonet will be perfect.”

Boto’s appearance is only known via visions, but her appearance in the visions are quite clear. She has magenta colored scales, a combination of Salmon and Lavender‘s. Her leg scales and brow are a neon pink color, with her nose and the small scales under her eyes being a very light lavender colour. She has the horns of a SeaWing and spines of a NightWing, which are both a light pink color. Boto’s wing membranes are a whole splash of colors, ranging from light lavender to a bright pink, which splotches of bright pink are scattered around her scales. Light lavender bioluminescent stripes are located on her underscales, however, it is unknown if they function or not. It is likely Salmon’s gene of unfunctioning markings carried down to Boto, who has lavender purple eyes.

SeaWing webbing is located on her underscales. Other than her horns and webbing, the rest of her body is the body of an NightWing. Five singular chest fins dot the frontal area of her underbelly, hinting at her SeaWing lineage.

Boto's true personality is unknown since they were first seen via vision, but it described her to be sort of a grump when not around friends or with her parents. She is sarcastic in a way, but never to the point where it's rude. The other thing, though, is that Boto is mortally terrifed of pink, with her and Salmon as an exception, due to the story of a pink dragon.

Not much is known about Boto’s history, but it is likely that like Leopardfish, her egg was Animus enchanted by Anenome, then given to Salmon and Lavender as a gift. The egg hatched days later, which out of it came Boto.

It is currently known that Boto resides within Jade Mountain Academy, but other than that, no other history is known.

again I think they’ll be friendos 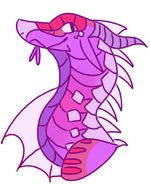 By Pumpkin!!! Thanks!!!
Add a photo to this gallery
Retrieved from "https://wingsoffirefanon.fandom.com/wiki/Boto_(Sunset_and_Undertale)?oldid=1864170"
Community content is available under CC-BY-SA unless otherwise noted.