Start a Wiki
Bluebell belongs to Tailbite. Do not edit/steal/use without permission.

To keep her animus powers a secret from her parents

Bluebell is very blue. Her underbelly and face are bright blue, the color of a bluebell flower. Her underscales are dark blue, and her overscales are very dark blue, the color of a night sky. She wears a silver earring in the shape of a teardrop. Her eyes are a bright, startling leaf-green color, and she has silver freckles around her mouth. She has SilkWing horns and antennae, and dark blue spikes going down her back. She has rather large SeaWing wings with diamond-shaped pale blue-white glowscales on the underside of them. She doesn’t have glowscales anywhere else on her body. She also has glands on her wrists so she can spin silk, as well as webbed talons.

On the outside, Bluebell is happy, cheerful, and bubbly, but on the inside she is nervous and paranoid. She is terrified that her parents will discover her animus powers, and what they would would do to her if they did. She often writes about her worries in her diary, which she locks and hides beneath a loose wooden plank in the floor under her bed. She is also worried that she will lose her soul, which is why she has only cast three spells in her entire life: to make it rain, to keep her half-sister, Violet, safe no matter what, and to make Star immune to Firepit’s animus magic. She didn’t tell Violet about the spell she cast on her earrings because she was afraid of what her reaction would be. Bluebell is very caring and kind, and is willing to sacrifice anything for her friends and family, including her own life.

Bluebell didn’t discover her animus powers until she was three years old. By then, all she had been taught was that animus dragons were evil, cruel, and untrustworthy. Her parents told her that every animus that ever existed had turned evil eventually. Bluebell often had nightmares about evil animus dragons coming to take her soul. So of course, she was absolutely terrified. She didn’t know what to do, who to tell, and if she should tell anyone at all. She knew her parents would hate her if they found out, and she guessed that they would kill her. So it wasn’t until later that Bluebell revealed her deadly secret to Violet. Bluebell hoped that Violet would know what to do, but instead, her half-sister was openly horrified when Bluebell revealed her powers. She demanded to know how long Bluebell had known, and how many spells she had cast. Bluebell told her that she had known for about two years, and that she had cast only one spell. Violet wanted to know what that spell was, and Bluebell told her that she had yelled at the clouds to rain because it was so hot. She had only been fooling around, of course, but to her shock it actually started to rain. Violet pointed out that it could’ve just been a coincidence, and Bluebell admitted that it could’ve been, but that she didn’t want to cast any more spells to find out. However, after Violet and Clearwing get into a particularly fierce argument, Bluebell enchanted Violet’s earrings to keep her safe no matter what. Later on, at Black Rock Academy, Firepit made it clear that she wants revenge against Star. Terrified that Firepit would injure her friend or worse, Bluebell puts a spell on Star to make her immune to Firepit’s animus magic. After that, Bluebell vowed to never cast another spell again.

Bluebell and Violet have a very good relationship. They tell each other secrets, and are very loyal to each other. Bluebell dislikes it when Violet and a Clearwing argue, and wishes her mother and her half-sister would get along. Violet is one of two dragons that know about Bluebell’s animus powers, the other being Star.

Clearwing and Ray are Bluebell’s parents. Bluebell deeply loves them both, and cares about them. At the same time, however, she is terrified of what they would do to her if they found out about her animus powers.

Kiwi and Conch are two of Bluebell’s friends. While they aren’t as close as Star is to Bluebell, the three get along well, and Bluebell thinks very highly of them.

Star is by far Bluebell’s favorite friend. Star has always been nice to Bluebell, and for that, Bluebell is very thankful. Bluebell knows she can trust Star with anything, which is why she told her about her animus powers. Bluebell was worried about Star when she became Firepit’s enemy, and was scared that Firepit would kill Star. 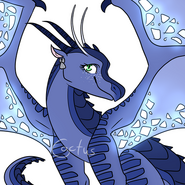 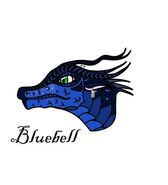 Bluebell by DarkstalkerDeathbringer
Add a photo to this gallery

Retrieved from "https://wingsoffirefanon.fandom.com/wiki/Bluebell?oldid=1819102"
Community content is available under CC-BY-SA unless otherwise noted.