Wip and belongs to Sparrow. He is my sona. I’m also revamping his appearance so just wait a bit!

More Than Survive, from Be More Chill, but nOT THE WHOLE SONG!

His parents and sister, and the rest of his family.

He can't shoot venom or fire, leaving him mostly harmless, but he has a strong tail.

“My one and only love is pizza.”

“Yeet yeet time to eat!” Then he dabs.

“Strike me down, and I will become more powerful than you could possibly imagine.” Obi-wan Kenobi

Blue Raspberry is a dreamer. He dreams of being the best dragon he can be, as well as tons of crazy dreams each night. You could say that he‘s obnoxious, which is true, but he can also be very quiet. He cares about his friends and family a lot.

He tries to be as happy as he can, though he is actually very worried, stressed, and has a bit of anxiety. That leads to him faking being happy, and he’s teaching himself not to cry. He feels alone quite often, though he knows he’s not.

Blue lacks empathy, he tries to be kind, but he just can't seem to find the heart to do that. He really wishes

"Always remember, you are completely unique. Just like everyone else." Margaret Mead.

Blue scales flash in the sunlight.  He's unable to change the colour of his scales, they're stuck a vibrant blue.  His underscales are light blue, and his horns are a pinkish red, as well as his nails and spikes on his back.  He has mint green SeaWing light-up scales but only on his tail, legs and arms, and a three on his face. His eyes are a bright yellow. His wings are light yellow to dark yellow.

He has more of a Rainwing build, with a long neck, but you can tell he is part SeaWing because he has big shoulders and isn’t excessively thin. Blue isnt excessively strong looking, though his shoulders and arms are quite strong. People quite often underestimate his strength.

For clothes (which are very optional! Seriously you don't need to draw them!) usually a fandom tshirt, (Voltron, Star Wars, Marvel, Harry Potter.) Jeans, bracelets, and whatever else you feel like! He likes sunglasses, exspecially aviators.

"If my life is going to mean anything, I have to live it myself" -Rick Riordan

(This is not the same as strengths ok)

"Be careful of love. It'll twist your brain around and leave you thinking up is down and right is wrong." Rick Riordan, The Battle of the Labyrinth.

Otterpop “she’s so cool! Pastels are awesome and I loves how happy she is! I likes how she is super exciting, but also chill?? Also bugs are bad!!!”

Peak “she has very good taste in music! And I also spends time crushing on my crush, and loves to swim anywhere! i day dream a lot too. But KEEP THOSE BEETLES AWAY FROM ME!”

Jargon “neat dragon. She’s quite interesting, and I like chocolate too! Pickles are great. Plus WE MUST TAKE DOWN RAP MUSIC TOGTHER!”

Fantasy “Sooooooo awesome!!! Like, she’s another tribred, and she’s colourful??? That reminds me of someone, meeeee!! So yeah, also I will splash you back, so watch out!”

Disc “Disc is amazing! She is super cool to be around, and her art is cool! We get along quite well! I like how she doesn't rely on karma to get back at people, but I’ve done that and it works! And she’s really funny!!!”

Iceberry "She is super! I love fruit too! Hockey is good, but I don't love it. I love to sing and dance too, we should be in the talent show together! I have a very strange laugh too, we should make a club!"

Featherflight "Crazy is the new cool! I like how she likes books! I find her fun to be around, and I'd like to get to know her better! I love animals too! I also trip a lot, but I usually fall into holes, I don't know why though..."

Element “Okay, But you DO need bookmarks! I like how she defends what she believes, that’s cool! I yell someatimes, yelling is fun! Exploring is fun, I like look for cool stuff! Also apples are good!”

These are actual things Sparrow has said before. 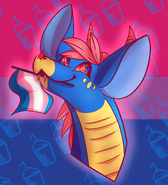 By Feral Peril! Thank you! 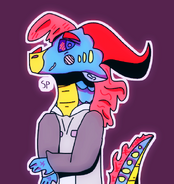 This is his ref, by me 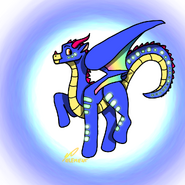 He’s in there on the left! With all his buds! Other dragons made by other wikians! 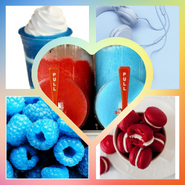 Aesthetic by Feather Flight! thanks!

By Glamorous Sneaking! Thanks!

THIS IS HIS REF PAGE! GO BY THIS PLEASE! by Sparrow 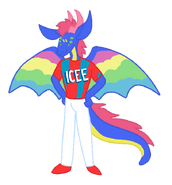 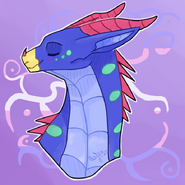 By Verglas the Icewing!! Thanks!!

By ReverbtheDragon!! Thanks!!
Add a photo to this gallery
Retrieved from "https://wingsoffirefanon.fandom.com/wiki/Blue_Raspberry?oldid=2043136"
Community content is available under CC-BY-SA unless otherwise noted.