Blizzard is a young male IceWing and member of the Sapphire Winglet. He is friends with Cowry and generally the one that keeps her from storming into crazy situations without thought.

Blizzard’s main scales are pale cyan. They’re darker on his back, limbs and wings. Both his underbelly and his wing membranes are a clear white colour. His horns are long, smooth and slightly curved downward. They are white just as his crooked claws. He has small ears. Blizzard’s sclera is black while his irises are dark icy blue. He has spikes of various shades of greyish blue on his back. Blizzard has light blue freckles on his wings, shoulder, legs and beneath his eyes.

Blizzard is a short-tempered, slightly arrogant IceWing, shaped by the hybris of his father Frostbite and his strict upbringing. Blizzard appears to care for noone, but himself in first line, putting his own needs over others. The dragonet also has a struggle to express any kind of feelings including compassion for others. He feels things, but anger is probably the only feeling he can express outwardly. Blizzard doesn’t show his fears and is quite brave, but he usually isn’t willing to get into dangerous situations for no reason. He prefers to be alone and read scrolls. He is also a sceptic.

Cowry is the first dragon Blizzard had felt any compassion for. She is kind and generous, even though her constant optimism and her thirst for adventure can become annoying to Blizzard, he still enjoys her companionship. And there had been more than one instance of her pissing off the IceWing. He values her friendship also because she is his first non-IceWing friend.

The relationship between Blizzard and his father is not how a relationship between son and father should be. Frostbite had always been a strict single father, not afraid of giving his dragonets harsh punishment. Blizzard isn't sure whether Frostbite can actually stand any of them and honestly is confused as to why this grumpy arrogant IceWing got dragonets in the first place. It's obvious that Blizz doesn't think highly of his dad. 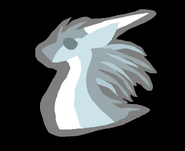 Add a photo to this gallery
Retrieved from "https://wingsoffirefanon.fandom.com/wiki/Blizzard_(Winter314)?oldid=2109260"
Community content is available under CC-BY-SA unless otherwise noted.