Start a Wiki
B L I S S F U L
This does not belong to Darkstalker. Base code by Element, Grape Cakes, Galaxzzy, and AvalonCat. 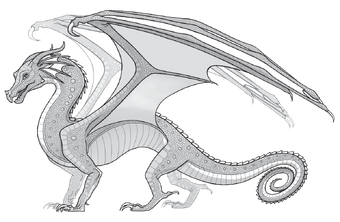 Appearance
Blissful has a a rather normal rainwing build, though her diet of sweet bread and rasbery ice tea is starting to make her a little more rounded. Her wings, much like Kindle's, are to big to allow her to fly easilly. Rendering her completly flightless in her home of the Rainforest Kingdom. Her most noticeable trait is the glowing star/moon map on her scales gifted to her by her father. Like most rainwings her scales can change color, though the glowing marks on her scales mean that Blissful can’t camouflage. After all, her scales may change, but she is still glowing.Her spines, horns, and claws are all periwinkle. Bliss’s eyes are lemon yellow unlike the green or lime of a normal rainwing. She usually wheres a small paper flower chain necklace and bracelet as an accessory and is usually splattered with paint.

Personality
Most would at first see Blissful as a rather bland rainwing. She is almost always very happy, eternally positive and enthusiastic. She is the sort of dragon who can befriend and will befriend anyone.

This can be a positive, befriending dragons who could really need a friend (even if they won't admit it). But also dragons who aren't good for her. She is a terrible judge of character, and her older friends have to review new friends to keep her safe. As well as reminding her that if they are punching you you aren't friends. Though this often seems like to much work, when she is at her best Blissful can make everyone in the room feel better.

She get's very anxious when dragoms look at her art, often having to cover her hed to calm down like a bird. When she remembers to feed herself she likes raspberry ice tea, though she doesn’t like raspberries (“What could be hiding in their?!”). She gets very flustered when dragons ask what "wrong" her scales, though she has been working on her confidence through drawing herself. The constant change of the patterns on her scales makes this unreasonably difficult. Though this is improving her star mapping skills.

Do to her art and anxiety over "wasting time" (aka sleeping), she is nearly nocturnal between classes. Using her star/moon map's glow to draw in the dark, even though it is terible for her eyes. She may have joined Jade Mountain just because of there better lighting. She chooses to only draw things that make her happy, as a way to improve her mood. Even her darker drawings are soft and at least a bit cute. Her demons are pastel and their tails are squishy, though this makes them no less formidable.

Though she is not quite sure on her sexuality, she does know she loves everyone. Though they might not all be her allies, she still wants to help them all and make them all happier. Despite her being an artist seemingly mean she is introverted, when she can not make art she tries hard to make friends. While drawing she may forget to connect to her friends and to eat, so PLEASE someone check on her to make sure she isn't dead... 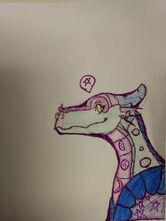 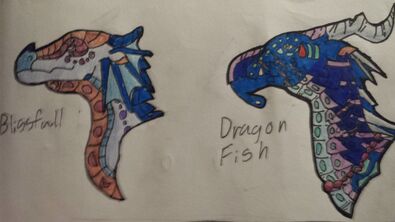 Abilities
Blissful’s venom leaves star shaped scars and the shapes on her scales work as a star/moon map (as well as glowing!). She also has terrifying grip strength from drawing. 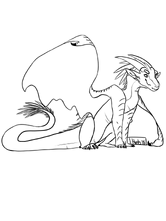 Weaknesses
However Bliss has terible eye sight and is a clumsy flyer. Her tail is also not as dexterous as most rainwing tails, not being quite as thin as that of a thinner dragon. 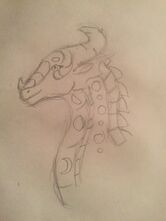 Trivia
Her inability to judge someones character and positive attitude, is based off one of my closest friends at school. Thanks A! 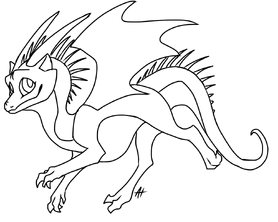 Retrieved from "https://wingsoffirefanon.fandom.com/wiki/Blissful?oldid=1919030"
Community content is available under CC-BY-SA unless otherwise noted.