"I guess some days are just meant to surprise you."

A dark green SeaWing/NightWing hybrid, with bioluminescent scales here and there. She is more wiry than either a SeaWing or NightWing, but she also has the stocky strength of a SeaWing and the jagged spines of a NightWing. Her eyes are also one of the darkest of her family.

As for scars, Birchfrost has several minor ones on her talons, memoirs from a training accident moons ago. The largest one is a scar slashed across her throat, testifying to a flight accident during her time in the Claws of the Clouds Mountains.

Birchfrost doesn't enjoy wearing jewellery, and she is usually found trying to disentangle the many necklaces that she recieves from her various relatives across Pyrrhia. When she must, she wears delicate silver earrings the loop through both of her ears, but she takes them off as soon as she can.

Birchfrost hatched in the tundra of the Ice Kingdom, just before the Great Ice Cliff. Before she turned two she was whisked to the Claws of the Clouds Mountains, as her mother decided that she would rather a home closer to 'civilization.' Being a NightWing, her mother enjoyed the artistic skills of Birchfrost and soon purchased her various tools and equipment from the nearby town of Possibility.

During this time, Birchfrost tried to teach one of her brothers (Tuatara) how to do a trick in the air. Doing this, she crashed into the forest and was slashed across the throat and shoulders by the branches. Although it was not a serious injury, it was extremely embarrassing to be around other dragons, even after it was healed.

Her father, being a SeaWing, missed the sound of the sea, but he allowed the dragonets and their mother to remain in the icy peaks for a while longer. Her brothers and her soon were forced to attend the school in Possibility, but just as Birchfrost began to feel comfortable around the other dragons they were moved to the shores of the Sky Kingdom.

She now lives in a sand-filled cave and regularly replenishes her art supplies. She can be seen flying, painting or even just perching on a log to admire the sunrise on the water. 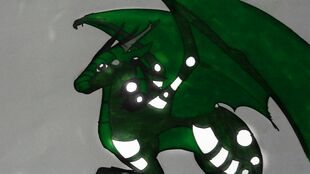 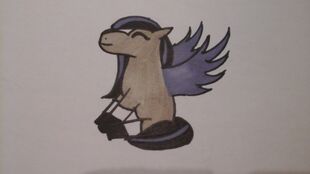 Birchfrost's Original Profile Pic
Add a photo to this gallery
Retrieved from "https://wingsoffirefanon.fandom.com/wiki/Birchfrost?oldid=843183"
Community content is available under CC-BY-SA unless otherwise noted.