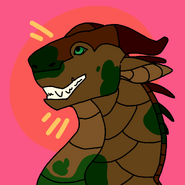 Basil is a MudWing/RainWing hybrid who currently resides at Jade Mountain Academy as a student in the Gold Winglet. She is the wingsona of sunlitserenity.

Basil has medium-brown scales that vary in shade from her underbelly to her spine. Her body is coated in splashes of green, inherited from the RainWing side of her family. Basil's build is very MudWing-like, with thick limbs and small wings, although her tail is prehensile (but a little thicker than usual). She has a forked black tongue and fangs that poke out of her mouth. Basil's eyes are green.

If warm enough, Basil is capable of breathing fire, although it isn't quite as hot as a regular dragon's. She can also hold her breath for up to fifteen minutes, but under stress this time decreases to about nine. Due to her blotchy scales, she cannot camouflage properly in the swamps or rainforest. She's gifted in flight, but slightly nearsighted.

Basil does have venom-spraying capabilities, but her range is only about three feet and her venom is not lethal. A direct shot causes painful welts and scarring, while scathes only induce a heated sensation.

Basil was hatched in the Mud Kingdom alongside six sibs - Cottonwood, Autumn, Evergreen, Bobcat, Tadpole, and Woodpecker. They grew up in a poor village near the delta. Basil became deeply fond of scrolls, and would read whatever they could scrounge up.

When they were two, a gang of SkyWings attacked and burned the village, badly wounding Basil's brother Bobcat and driving the sibs inland. For a while they wandered the kingdom in disarray.

After failing to find new residence in the swamps, they went to the Rainforest Kingdom, and were accepted into a small village not far from the treeline. Basil got a seasonal job as apprentice flowerkeeper and befriended multiple RainWings, reading and making short stories in her spare time.

At the age of three, Basil entered a tiny RainWing school near the village, and became interested in culture. She traded plants for many cultural and historical scrolls, collecting them and reading all she could. Soon, she was one of the star students at the school.

When Basil turned five, her sibs surprised her with the knowledge that they'd collected enough treasure to send her to a real school: Jade Mountain Academy. Basil was delighted, although slightly nervous about moving. They helped her pack and all flew to the mountain.

Basil joined the school a month after her fifth hatchday. She was placed in the Gold Winglet, taking the place of MudWing, and roomed with two other dragonesses - Rainstorm the SeaWing and Prism the RainWing. The three soon became inseperable friends.

COTTONWOOD -- Bigwings, female. Slender build with short limbs, her scales can change between shades of brown. Has a frill and amber eyes. Weak firebreath. Very motherly and observant, she can tell when another dragon's upset, and always makes sure her sibs are okay.

AUTUMN -- Female. Chubby with light brown scales and lines of RainWing dots, which can change color. Aquamarine eyes and no abilities. A little strange in humor, but nice nonetheless, although she wishes their parents actually knew them.

EVERGREEN -- Female. Very tall and lean, with dark brown scales and color-shifting scales on her snout and talons. Umber eyes and fangs that have venom which induces heat-like burns. Cool and collected at all times, but can be goofy around her sibs. Has snarky moodswings.

WOODPECKER -- Male. Bulky and large, with scales that can change between a dark shade of any color. Long neck and tail with malformed, useless wings, which hang at his sides. Yellow eyes and venomless fangs. Very quiet but intelligent, gets deeply analytical about life sometimes. Mostly keeps to himself.

TADPOLE -- Male. Tiny with a lightweight build and scales that are always very pale, but subtly change colors. Heterochromatic eyes, one green and one brown, and strong firebreath. Active and exciteable, but wary, and nervous around new dragons. Likes to crawl over his sibs and surprisingly skilled in fighting.

BOBCAT -- Male. Medium-sized, with a RainWing frill and long claws and tail. Dusky brown scales, with color-changing swathes on his face and legs, which alter depending on mood. Yellow eyes. Malformed fangs which drip mildy-hot but overall useless venom at random intervalls. Overly kind and sweet, but annoyingly honest, and has terrible social anxiety.

IGUANA -- Basil's father, a RainWing. She occasionally wonders who he is.

COTTONWOOD -- Basil's sister and bigwings. Basil looks up to Cottonwood a lot, and is very loyal to her. Cottonwood is the closest thing to a mother for Basil, and she misses her a lot at the academy.

AUTUMN -- Basil's sister. Basil likes to joke around with Autumn, and the two often got into trouble in their birth village.

EVERGREEN -- Basil's sister. Basil thinks of her as a "cool big sister", although they're the same age. They used to spar a lot and now swap letters frequently.

WOODPECKER -- Basil's brother. Basil adores him greatly, but feels bad for him, since he cannot fly due to malformed wings. Likes listening to him.

TADPOLD -- Basil's brother. Basil likes to spar with him, and lets him sit on her shoulders to see higher. She thinks he would make a good student if not for his wariness.

BOBCAT -- Basil's brother. Basil loves him and wishes he could go to JMA, too, but knows it would be too stressful. They used to read together and he would help collect flowers with her.

RAINSTORM -- Basil's friend, SeaWing in the Gold Winglet. They wrestle and joke a lot, and Basil loves her humor. Basil's slightly concerned about her past.

PRISM -- Basil's friend, RainWing in the Gold Winglet. They read and study together often, and like swapping stories about the rainforest. They sometimes have fruit-eating challenges.

• She was originally won in a raffle.

• She has arachnophobia, the fear of spiders.

• The closest friends she's ever had are Rainstorm and Prism, excluding her sibs.

• She is currently five years old.

Retrieved from "https://wingsoffirefanon.fandom.com/wiki/Basil?oldid=1130564"
Community content is available under CC-BY-SA unless otherwise noted.