Baslat is a collab between The Wolves Heart andAthenacool11. He is owned by them. Coding by Pom.

Basalt was hatched into an evil family. His evil sister, Equator, his mother, Sienna, and his father, Singe. He was taught to be evil, but his heart was never on the dark side. Of course, he decended from evil, so the bad gene was in his blood. He liked fighting, but he hated other SkyWings being hurt. On his 7th hatching day, he hurt his first SkyWing. Before, he had just been fighting random NightWings and MudWings and all of the minor tribes(to him he though all tribes were minor except for SkyWings). He hurt a girl, a 6 year old SkyWing called Caramel. She had asked him to go out with her, and he scared her over the eye. Of course, she was a stranger to him, and didnt know he was Demisexual.

Basalt is plain mean. Hes not evil, but hes mean, and hes bad. Of course, he cant help it. Its his family. He likes mocking his sister, and younger dragonets. He often argues with his parents, and picks fights in the outdoors with other budding SkyWings. He likes the tribe anyhow. Sometimes he has a (very) short temper. The one thing that makes him calm down, is watching birds. He loves watching the birds land on his shoulder. No one knows he dos this, he keeps it a secret.

His main scale colour is typical. Red. His underscales are bright white, very unusual for a SkyWing. That takes after his fathers yellowish-white underbelly. His spikes are pure black. His underwings are the same colour as his underscales. His horns, talons and wing membranes are all dark red/maroon. His eyes are light amber/dark yellow. His body is sleek and skinny, but with no bones showing. 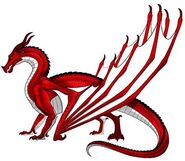 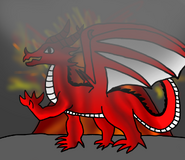 A real piece of Basalt
Add a photo to this gallery
Retrieved from "https://wingsoffirefanon.fandom.com/wiki/Basalt?oldid=1130592"
Community content is available under CC-BY-SA unless otherwise noted.