It depends on the story, either his teens or 20s

The rainwing forest with Daisy c:

Him, Daisy, his parents.

Barron is a skywing with a white body and a red underbelly. Nobody knows why he was born like that, but nobody really questions it that much. He also has black horns and red eyes (the picture shown to the right is him with his eyes closed :p)

"Nobody really knows why I look different, but I'm still as much a skywing as you are your own tribe. There's no reason to discriminate." -Barron, being interviewed.

Barron is a loving and caring person, and is somewhat sensitive (Daisy thinks it's cute XD). He always wants to be nice, but gets MAD when you tick him off. He'll become friends with anyone who's nice to him. He also is a pretty chill and fun dude once you get to know him. Beware, once you bring up one of his interests, it may be DAYS before you can get him to shut up.

"Eat bacon, make music, and sleep. That's basically what I do with my life. Heh. I'm surprised Daisy hasn't forced me to get a legit job, rather than make music all day. But hey, it's for a label, right?"
-Barron, being interviewed.

As a baby, no one really knew why he looked the way he did. He was a skywing, just different colors. Some people actually thought he was an icewing.

Growing up, he didn't have to deal with the war that lasted 20 years, and he grew up in a technological age (thus, he got into electronics and dubstep).

In his teens, he applied for a fast food restaurant, Dragon Burger. On his first day, he met Daisy for the first time.

He has a thing for rainwings ;)

In the end, he decided to marry Daisy, and Genocide is still a very great friend of his (or so we THINK! Dun dun DUNNN!!!), although she's still pretty overprotective of him. 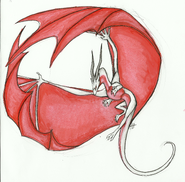 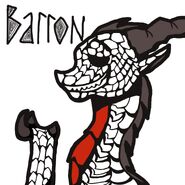 Drawn by ThatDragonLayingAround C:
Add a photo to this gallery
Retrieved from "https://wingsoffirefanon.fandom.com/wiki/Barron?oldid=632153"
Community content is available under CC-BY-SA unless otherwise noted.