"Life sucks. We live in a world of desensitized, apathetic dragons.

Why don’t you just get with the program, and stop caring?"

Taking a quick look at this dragonet, you can immediately tell that he isn’t a normal four-year-old.

He may be short for his age, but his large and wavy sail makes him look much bigger. His build is more SeaWing like, with stubbier legs and a shorter neck. The tail isn’t as muscled as a SeaWing’s, rather it’s skinnier and longer like and SandWing.

Although he does have a barb at the end of his tail, it doesn’t contain any venom. But he will still use it as a weapon when possible.

He practically emanates scorn and hatred, his posture and expression showing that he wants nothing to do with any nonsense.

There is almost always a frown across his face, and his eyes are narrowed. He always seems to have bags under his eyes, even after a good night’s sleep. On the rare occasion he smiles, it makes him look much friendlier and more approachable.

His face is a light yellow, as well as his underbelly. His top-scales are dark blue, as though you added black to a pure, cobalt blue. His sail is light baby blue, along with his wing membranes. Sea-green eyes sparkle maliciously back at you if you look him in the face.

There are a few glowstripes around his body. They are a dark turquoise color, and can not light up very brightly. His claws and horns are an off white color, shining ivory in the light.

His mannerisms are very stiff and forced, if he even bothers to do anything. If given the choice, Barren would prefer to sit in the background and enact one of his many schemes.

Even after a brief meeting, most dragons think they have him pegged. But they’d be wrong.

He is very jaded, not being very enthusiastic about anything. He always appears to be tired, and drinks many cups of coffee every morning. When he is forced to do activities at camp, he always tries to find a way to get out of them, or find a way to ruin them.

Pessimism would be another word that comes to mind after meeting him. He seems to have a very bleak outlook on life, often finding every reason why a situation is bad. Barren appears to welcome death, and doesn’t care about dying or others dying.

He is very much the troublemaker of Camp Condor, always making a new plan to make life terrible for the counsellors, Cedar and Torch. He will also plan cruel pranks on the other campers. He has earned a reputation for being a manipulator, always having another plan up his sleeve.

When given the chance, he will blackmail the counselors or campers to get him what he wants. Normally, he only does it for personal gain, or just for fun.

Due to his maturity, Barren refuses to participate in the “childish” activities that Cedar assigns and doesn’t react to scary situations. Although not a genius, Barren is very street smart for his age. Avoiding the other camper’s tricks is second nature to him.

Although he isn't scared by most normal things, he is absolutely terrified of the Quartermaster for the camp. He just freaks Barren out to no end. He also has an irrational fear of most IceWings, after almost being murdered by Gleam the crazy cultist.

But, under his cold disposition, he has a softer side to him. He cares for the other campers, even if he never shows it. They are really his only friends, and as much as they mutually dislike each other, in the end they all want to stick together. When Camp Condor is put in danger, he will try to help, not for how much he likes it, but because he cares about the others.

-Father was a lowly soldiger of Blaze, mother was a cook in the kitchens

-Met and had an affair, but never meant to have an egg

-When the egg hatched, none of the parents were ready to take care of the dragonet inside

-After the war, Tomcat never came back. He had found another dragoness and left Coast to take care of Barren alone.

-Coast reluctantly took care of him, although she treated him badly

-Would verbally abuse him, and never really did anything with him

-Grew up resentful and bitter

-When Coast found out about Camp Condor, she immediately sent him there so she wouldn't have to take care of him for a while

-Got to camp, and immediately despised it

-Met Cedar and the other campers, but didn't connect with any of them due to his pessimistic nature

-When Amazon and Wisdom arrived, they somehow hit it off

-They mostly bonded over their attempts to escape the camp, and began hanging out with each other after that.

-Now the trio causes trouble and mischief around Camp Condor

-Being caught in the crossfire between logic boy, Wisdom, and magic kiddo, Spellcaster

-Writing fake love letters to a dragoness from Cedar

-Sending Galaxy "To the moons."

-"Parents Day." Coast didn't show up, Cedar and Torch found out how badly Barren is treated

-It somehow snowing in the middle of the Sand Kingdom, and Amazon absolutely loving it

-Having a beach day, and eveybody finds out that Barren can't swim

"I refuse to believe someone as happy as you can possibly exist. " -To Cedar

"I am dying, Barren! You just don't care because you're selfish, and you only ever care about yourself! That's what selfish means!" -Amazon after Barren's failed attempt to confort her

"You are the bane of my existence." -To Cedar

"My parents don't care about stuff like this! They are NOT! COMING! EVER!"

His Parents: Barren absolutely despises his parents. They mistreat him, and verbally abuse him. He is constantly reminded that he was a mistake, and that they wish he was never born. He learned at very early age that life was unfair, and that there wasn't any reason to look forward to the next day. Barren would never admit it to anybody, not even himself, but all he really wants is parents who would love and take care of him.

"Wow! Amazon, thanks for getting us through this. You know, sometimes, life is beautiful. ...Nope nevermind. Life still sucks."

Amazon:His partner in crime at camp, Amazon will help him with whatever mischief he is planning. Her constant energy and need to be doing something can sometimes get on his nerves. Amazon is one of the few people that Barren respects and actually sees as a friend rather than another annoying person. She is one of the few campers who actually enjoys being at camp, and will jump into participating in activities, dragging Barren with her. Amazon isn't the smartest though, and Barren finds it annoying how idotic she can be. He will occassionally use her for her uncanny ability to understand animals.

Wisdom: Wisdom is also one of Barren's best friends. Although he respects Amazon more out of the two, he and Wisdom also have a rather close bond. As he has no trouble supporting Max's troublesome antics as well as join in trying to escape Camp Condor. Most would consider him the brains, or at least the nerd, of the trio. Wisdom is exceptionally book smart for his age, although not very well versed in anything else. His whiny and egotistical nature means that it is rather easy for Barren to manipulate him. Wisdom also sort of serves as a moral compass to Barren, keeping him from doing anything really bad.

"Oh, no. I hope YOU learned, Cedar. I hope you learned that before today, you only had one little demon to deal with. But now you've got three."

Cedar:His least favorite person at camp- or at least, that's what he tells everybody. Cedar always appears to be happy, no matter what terrible things happen to him. Barren hates how he can go through so much strife (most of which Barren causes) and still think the best of people. Cedar's chipper attitude really gets on his nerves, and he is always trying to find a way to "Break his facade." The way Cedar keeps trying to make him happy confuses him, after all, why would anybody waste so much time on him? But deep down, very deep down, he sees Cedar as a sort of substitute parent. The way he always notices, and he cares about Barren's wellbeing makes him feel appreciated. As though he could deserve to be happy.

"There's no time traveling animus out there to save you, Torch! GET YOUR STUFF TOGETHER!"

Torch: The other counselor of Camp Condor, Barren respects Torch a good portion less. In fact, he barely respects her at all. He will constantly beat her down, even if she's older then him. Torch, in his opinion, is the worst counselor at her job. She is constantly slacking off, and has no idea what she even wants to do with her life.

"He's a rich dragon with terrible morals. And who also potentially kills people. ALL THINGS I WAS ALREADY PRETTY SURE OF!"

Condor: Barren sees the owner of Camp Condor as a rich piece of garbage with terrible morals, which is proven to be true on several occasions. He also shows a great distaste for him and his authority. Barren has tricked Condor into confessing to his crimes, (Like stealing money from the royal treasury and running away from the Queens) as payback for calling him rough around the edges. In a general sense, Condor would be seen as a darker reflection of Barren. The two of them are both conniving manipulators, as Condor will sometimes point out. Barren is slightly afraid that he’ll turn out like the scheming sleazebag. Condor is currently on the run from the SandWings, and Barren will use this against him to blackmail him.

-Is a huge sucker for sweets

-Wanted a pet Platypus, but his parents wouldn’t let him

-He absolutely hates his sail being called “floofy”

-If he could’ve chosen his tribe, he would’ve wanted to be an IceWing because of all the spikes they have (aka, murder weapons)

-Will pretend his tail barb has venom to scare others

-Is definetly a Slytherin.

-Hasn't actually killed anybody, but thinks about it a lot

-Somehow he has a talent for knitting. (He learned it at camp)

-Can't swim. He hates water, and never learned how to. 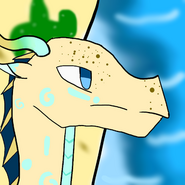 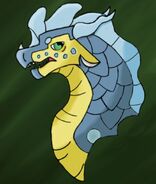 Barren and Cedar, by me! 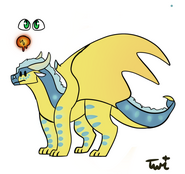 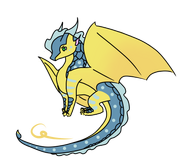 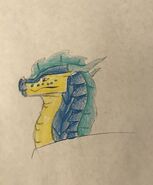 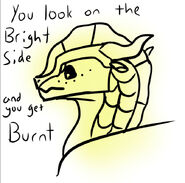 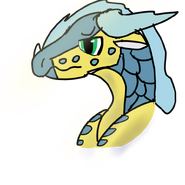 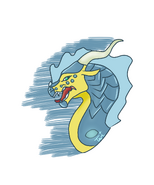 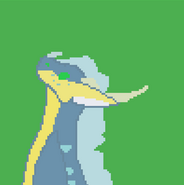 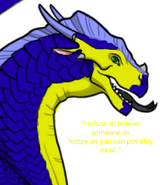 By: Lunathepurpledragon!
Add a photo to this gallery

Retrieved from "https://wingsoffirefanon.fandom.com/wiki/Barren?oldid=2134757"
Community content is available under CC-BY-SA unless otherwise noted.