Despite coming off as as clunky and steady as his siblings, Bandicoot has a surprisingly aerodynamic edge in his features, whether that be his pointed nose, his streamlined torso, or his dexterous, careful talons. Despite his obvious MudWing blood, Bandicoot is as elegant as he can be, considering his less than graceful patches of fur oas a mane and on his wrists and ankles. He angles himself tall and serpentine, trying not to let his mouse-ish traits overpower the sophistication he so desperately wants to show off.

Bandicoot talks big, but he isn't even that strong of a flier compared to the other dragons in Pyrrhia. Though because he's a better flier compared to his sibs, he likes to build up expectations. His wings are similar to MudWings, if not a bit larger, catch a decent amount of air for him to glide and give the impression of long distance flights. Flight is a challenge for him considering his mouse-ish tail and his general off balance build.

A majority of his scales and fur are shades of beige, with hints of colors shining through here or there. His most notable secondary colors are his yellow underbelly, where his scales are softer like on his arms and under his chin. His spine is covered with a layer of fur, but he constantly has patterns of a dark red-orange in the usual brown. It's hard to differentiate if its unusual enough to have been dyed however the fact that the spikes from his spine are such a similar color make the idea that it's natural not hard to believe.

His wings have hatched patterns as well, mainly in shades of red and yellow on the undersides, and seemingly splattered with mud and dust on the top sides. His horns resemble that of a maturing buck or a young moose.

Despite the laugh in his eyes or the jovial bounce in his step, Bandicoot can come off as strong and aggressive to those around him. He's brash and loud, making scenes as he desires, and loves making sure his point has been made clear.

Bandicoot is a bigwings, and as such his main priority has always been caring for his siblings. He wants to be strong and stern, because he genuinely does care about his slightly younger siblings. Though, he lets himself play with some idea of superiority as bigwings where it's his say or someone else better have a really good explanation as to why they want to doubt him. Still, there's an obvious gentleness he has when he's with his siblings, and he wants to be doing a good job in protecting them and letting them make their own choices. The mixed impressions he has of parents and "normal MudWings" confuse him, making him feel like he needs to compensate for something his siblings never seemed to have.

It's not a good excuse for his snappy remarks and his rude jokes that have a habit of stopping conversations. Even though he thinks it's obvious how much he cares for his loved ones, it's hard to tell when he's really being sarcastic and when he's seriously pointing out an observation that upsets him. Complicating things further, Bandicoot doesn't clarify easily, often escalating the situation, getting irritated there was a misunderstanding at all and eventually ending the conversation with him or his adversary storming off to blow over steam.

Not to say a snappy attitude hasn't helped him, either. As a traveler with his siblings, the occasional dragon would spit insults towards them. Bandicoot quickly had to put up shields so he could put himself between him and his siblings, protecting them from danger if it really came to that. The world has hurt him, he doesn't realize that the callouses it's leaving on him are hurting those around him too. He's stuck in his judgemental and worried beliefs that he keeps to protect what's left of his family, even if it's straining them further.

It's hard for Bandicoot to make connections outside of his very small circle of loved ones. It takes a lot out of him to put blind faith in anyone else, ending up with him cutting himself off out of some overthinking on his part. The strongest connections he tries to make are dragons that he wants to trust will help him in a time of need, simple safehouse types of dragons he's met while traveling with his siblings. He's always trying to think of some back up plan for what he assumes is their inevitable downfall.

Even though the world has roughed Bandicoot up here and there, Bandicoot takes serious pride in himself with his survival skills. He's barely lived in communities for a majority of his life, so he pushed himself to be an intelligent and tricky hunter. At this point, // PLANTS

legitimately a wonderful hunter and survivor, he's really smart which is why he dropped traveling to attend the canyon concaves

always took it upon himself to please his siblings, whether they were safe or not. after the accident,,,,,,, in raccoon's history, he abandoned possibility and attended the canyon concaves, watched over by the queens themselves, hoping he'd keep his last sibling safe.

but WHOOPS raccoon is alive and he LEFT THEM (not intentionally :()

bandicoot + otter old refs by myself! 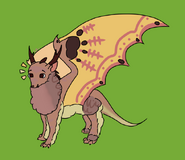 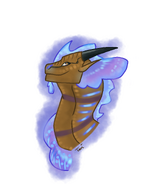 placeholder because otter doesn’t have a page but by TwilightWoF!!!!
Add a photo to this gallery
Retrieved from "https://wingsoffirefanon.fandom.com/wiki/Bandicoot?oldid=1841200"
Community content is available under CC-BY-SA unless otherwise noted.