Character belongs to Lacey and was adopted from Twi. Don't steal/edit/use without permission. Coding by Pokeballmachine.

Life would be so much easier if we didn't try.

Think about all the starving dragonets, or the poverty-ridden families, or the kingdoms at war. There's no way all the problems in our world will be solved, so there's really no point in putting forth effort into it.

The light at the end of the tunnel is probably a train. Let's face it, our world is messed up beyond fixing, and there's not much hope left. Most of us have given up trying.

But without the trying, where's the life?

Without the challenge, where's the fun?

Without the hope, where's the love?

-Build is very lithe, although not muscled

-Horns are the same color

-Markings on arms are a dark green that fades into white

-Face and wing claws are white

-Tail scales are green the color of bamboo stalks

-Spines are dark green, darker than the face markings

-Normally has a bright smile on his face

-Very exuberant with his hand motions

-Is very good at sitting still

-A sweet dragon, most are surprised that he's part of the LeafWing War

-Mostly extraverted, although can be reserved at times

-Uses his heart more than his head

-Thinks emotionally, and has trouble removing himself from the situation to think logically

-Thinks about the future constantly

-Will flip between being assertive with his decisions, or completely doubting himself

-A bit of a people pleaser, although not a doormat

-Likes doing things for others, and their happiness makes him happy

-A huge imagination, and will create stories that draw others in

-Very curious about the world around him

-Observant as well, and can notice small details

-Very energetic, and can talk for hours at a time

-Positive, he always tries to see the bright side

-Very determined, and will stick to his moral at all times

-When he commits to something, he follows through

-Will always get back up and recover

-Good at communicating, and will say whatever's on his mind

-Gets stressed very easily, and has a hard time calming down

-Pudu, a RainWing, journeyed to Pantala in search of a life of adventure and excitement

-Traveled across the islands for a couple of years, hopping between them in search of the Lost Continent

-Eventually made it to Pantala, where she landed in the Poison Jungle

-Wandered around for a couple of days, losing one of her wings to a sundew in the process

-Was brought in by a LeafWing named Spruce, and went to live in the LeafWing village

-Later found out that Spruce had RainWing ancestry as well

-Had only one egg, Bamboo

-Bamboo grew up with two loving parents, Pudu and Spruce

-He had a fairly normal childhood, and never really knew about what life might be outside of the jungle

-But he never was able to get the hang of maneuvering through the dragon-eating plants, or the poisonous flowers, and would usually be a burden on whoever was traveling with him

-In an effort to not be put on missions outside the village, Bamboo began hanging out in the kitchens with the cook, Sapling

-Delighted in Bamboo's interest in cooking, Sapling took him as an apprentice

-Sapling also taught him how to recognize dangerous plants, and which plants are edible

-Bamboo spent most of his time in the kitchen, eventually becoming the sous chef

-As an adult, Bamboo still cooks in the kitchens

-Sapling retired after many years of being the chef, making Bamboo the head chef

-When he was about 25, he met a sparky LeafWing by the name of Pecan

-Bamboo found her funny, and they began hanging out

-They were best friends, and they eventually fell in love

-Together, they had two dragonets

-The oldest, Kapok, was born three years before the second

-Kapok takes after her father, as she loves to cook and bake things

-The second egg was named Fig, a short and stubby dragonet who longed to fight the HiveWings

-He was constantly getting into fights, although Bamboo still appreciated his spark

-Now he is training Kapok to be his sous chef, and helping Fig find an outlet for his apparently never-ending energy

Use this as a refrence when drawing him! 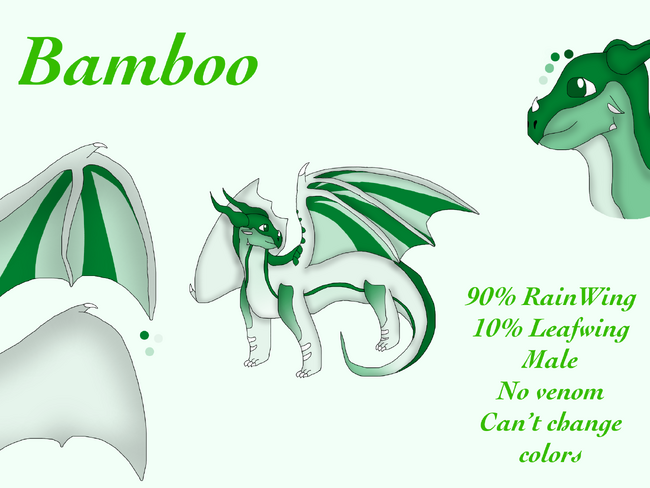 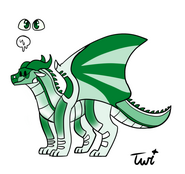 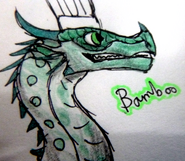 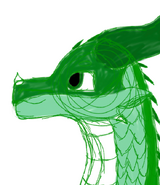 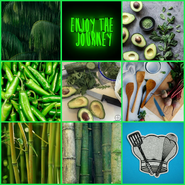 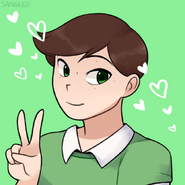 OC Designer used by Wolves
Add a photo to this gallery
Retrieved from "https://wingsoffirefanon.fandom.com/wiki/Bamboo_(Lacey)?oldid=2194844"
Community content is available under CC-BY-SA unless otherwise noted.