THIS DRAGON BELONGS TO Dreaming. NO TOUCHING.

Aztec is a pretty normal SandWing. Small in stature, his main scales are a sandy tan color, and his underbelly is a slightly lighter shade, along with his wing membranes. He has a tan ruff, with creme horns and claws. He has toffee colored freckles on his face, neck, and underbelly. His eyes are an ordinary deep brown. The only unusual thing about Aztec is three green freckles on his underbelly, hidden by his wing most of the time. When asked, Aztec usually calls it a genetic defect, which it sort of is. When he was three, he started putting on makeup to cover his green freckles. As odd as he is (for being in his family), the freckles just make him more odd, or worse yet, more normal, so he covers them up by painting them brown most of the time. The paint comes off in water.

Aztec is almost shy-ER then they come, and pretty depressed. He hates himself for being so different from his siblings. When he is alone or with those he trusts, Aztec is goofy and a bit of a geek. He likes astronomy, geology, music, and botany, and is fond of swimming, another quirk he hides. Aztec likes math and reading both classics and history scrolls. If he had his way, he would live alone in the observatory with a huge pile of scrolls, his plants, his guitar, some interesting rocks, a magnifying glass, some spare parts and tools (he likes building things), and a blanket.

Aztec can breath fire like any normal SandWing, and has a venomous tail, only his venom is slightly weaker then the normal SandWing's but it makes barely any difference. His venom is only slightly less fast acting then average. Besides that, Aztec is a good swimmer and has trained himself to hold his breath for longer then the average SandWing. He is very creative, a quick reader, and is skilled in both math and gardening. He is good at singing and playing his guitar, and he knows a ton about the stars and rocks, plus he is very good at fashioning small gadgets and things.

Aztec could be taken advantage of easily if a dragon knew the right way to do it. As mentioned, he is quite shy, but he is also fairly clumsy and socially awkward. Aztec has a lot of self loathing and doesn't trust himself. He is also afraid of spiders and scavengers. Besides this, he has frequent breakdowns only one dragon knows how to calm him down from.

Aztec was born two years after Cibola and Atlantis, his older siblings who were twins. When he was a seemingly normal SandWing, not displaying the SeaWing traits his siblings had, everyone assumed the reason these ancient genes from generations back had shown up in Cibola and Atlantic but not Aztec was because they were twins. His parents, Gale and Tumbleweed, still sold him to Queen Fox like they had done to Cibola and Atlantis. Aztec grew up feeling stupid and unwanted, forced to endure matchmaking schemes from Queen Fox that made him extremely shy. Since he didn't have SeaWing traits, Queen Fox didn't play with him as often as she did with Cibola and Atlantis, so Aztec had a lot of free time to discover his various interests. When his sister Kiakima was born with SeaWing traits when he was three, Atlantis was heartbroken. He was a freak of nature in a family of freaks of nature. He was abnormal, and yet somehow he was normal. Aztec, feeling like he fit in nowhere, withdrew even further into himself in public, as Queen Fox all but forgot about him. Unlike his brother and sisters, he was never made royalty. Aztec began to have serious issues with himself, normal by two different standards and abnormal by another three. Aztec, still forced to play in Queen Fox's games monthly, was taken pity on by Princess Citrine. She started spending time with him and, even though Queen Fox had forced him on dates with her, and she was a year older then him, he fell in love with her. She pulled him back from the messed up inside dragon he had been into himself. Citrine and Aztec meet in secret as often as they can, but at least once a week. Citrine is the only thing that keeps Aztec sane, but he feels like he doesn't deserve her and is constantly trying to push her away.

Queen Fox: He really is mostly indifferent to her, but he feels a bit mad at her for forcing him to endure her match-making schemes

Gale: He loves his mother, but feels guilty for what he feels like is failing her

Tumbleweed: He loves his father, but feels guilty for what he feels like is failing him

Atlantis He is terrified of his older brother, but loves him

Cibola: He is terrified of her

Kiakima: He loves her but feels like he should stay away from her

Princess Citrine: He loves her beyond expression. He feels utterly undeserving of a dragon so perfect (his words)

By the lovely Finny! Thanks! 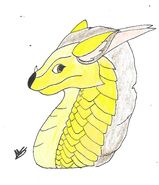 EEEEE he is so cute!!!! I love his expression!! By the OTHER Dreaming :) 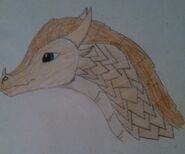 The trio
Add a photo to this gallery
Retrieved from "https://wingsoffirefanon.fandom.com/wiki/Aztec?oldid=2163793"
Community content is available under CC-BY-SA unless otherwise noted.