Character belongs to me! Please don't use him or the content without permission first, thank you

Got him from Fly's adoption center!

Leader of a league of knights

Cunning face, long snout and long waving horns, a pale forest green splatter upon his scales, sassy pale clover green eyes stare unblinkingly, this character in front of you is anything but happy. He always seems to have a salty look on his snout and who knows why this expression remains on his snout, perhaps it's because of the long, stretted fish hook through his snout bugging him or the scars burning across both the end of his mouth and near his forehead.

One would just assume this fellow a strange-looking LeafWing, but that would be only to the most careless of eyes, for luminous stripes stud in small amounts across his incredibly long neck and the ending of the lower jaw, but these aren't seen anywhere else on his body but the neck and head. None have truly seen this hybrid before nor does anyone believe he actually exists, for he's only been heard about in the legends the HiveWings tell to their dragonets, long forgotten knights of the lost continent, Pyrrhia, but this legend, although most confirm false, but every word of it rings true.

His build remains tall, stocky and honestly very wiry and bendy, it seems to give him the appearance of a large alligator with long wings. A sail that looks similar to a crest runs from the top of his head to halfway through his neck, membranes a silvery grey, the same hue put into the hybrid's wings and fin on his underbelly, a grey-green lacing every now and then through the sail.

Wings spread out in curving arcs, the membranes slightly curved at the top, similar to that of a leaf, but not quite, making them look quite unusual with the fuzzy forest green lacing here and there within his wings and at the very edge of these shall white starry speckles glitter, taking a appearance of stars that light up during emotional periods. You'd also perhaps notice this long, slender swaying horns, sharing a little darker hue than his scales, like lose ribbon, they flap up and down in the wind and, weirdly enough, they can be shown as antenna, bendy and very flexible and seemingly movable by Azeriel himself as if this dragon... hides secrets within himself like a vessel...

for relationships, I take preference to roleplaying beforehand 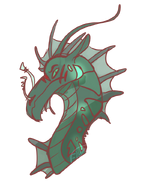 infobox
Add a photo to this gallery
Retrieved from "https://wingsoffirefanon.fandom.com/wiki/Azeriel?oldid=2317585"
Community content is available under CC-BY-SA unless otherwise noted.