His main scales are the color of the inside of an avocado, with some tanner and some darker green stripe-like markings on his top scales and running across his wings. He can change the color of his sail and ruff between yellow-green, green and black. He is mostly shaped like a lean sandwing but with a gentler face and a rainwing ruff. He has a prehensile tail, RainWing fangs and a SandWing tail barb. He always wears one earring, usually a very small golden hoop, sometimes with an amber droplet shape.

Can shoot venom out of fangs and has a venomous tail barb, but his venom is weaker than a normal SandWing. He can climb through trees with his prehensile tail and fly very well.

He’s mostly kind, but defensive because of how Lizard treated him. Avocado is loyal to his friends and will always defend them from other dragons, even if they are bigger than him. Absolutely adorkable when he’s with Sol, pretends to be embarrassed by Sol’s flirting and compliments but actually loves it.

Avocado was raised in the Scorpion Den by his father, a rainwing named Lizard. Lizard lived in the Scorpion Den even though he was a rainwing, and ran a smuggling business all around Pyhrria, which he forced his son to help him with. Lizard was horrible to Avocado, calling him horrible names and hated him for being a hybrid, even though that was Lizard's fault, not his. He lived a fourth of the year in Possibility with his mother, a sandwing named Cherimoya. Cherimoya was kind to Avocado and ran a produce farm and store, where he discovered his love of produce, especially avocados. Unfortunately, Lizard was a powerful dragon and even though he hated Avocado, he forced him to live with him and work in his smuggling business for most of the year. Lizard threatened to hurt him, his mother, or his mother's business if he didn't cooperate. Over time, Lizard grew more and more abusive of Avocado and started to involve him more in his smuggling business. 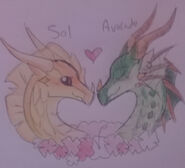 Avocado and Sol by CosmiqqBlittzar (Not acurate)

By StarWolfQueen (Accurate-ish)
Add a photo to this gallery
Retrieved from "https://wingsoffirefanon.fandom.com/wiki/Avocado_(Coast_the_hybrid)?oldid=2410310"
Community content is available under CC-BY-SA unless otherwise noted.