This is Eleven Fifty Two's Original Character, who is made specifically for the Remnants of the Cold War universe. Do not edit or use without my permission. Also don't steal. Perpetrators will be met with lawful force and tried under a biased jury.

Aura is a good looking hybrid. If it weren't for her color scheme, most would probably recognize her as some weird SkyWing mix. Be she wasn't a SkyWing, but instead half IceWing and half RainWing.

However, her scales are out of the world, and definitely pointed towards her RainWing blood. They were mostly purple, alone with a mix of green and pink on her larger IceWing scales. Along with those, she also inherited her spines, claws, and horns from this tribe. Her blood is an odd combination between the two though, being purple.

The RainWing in her is clearly obvious though, with the recognizable light grey brow and nose spike. Her underbelly was also pink, with her light green wings and frills contrasting. She also has the RainWing fangs, enabling her to use the RainWing spit, although she has difficulty controlling it.

It should be noted that Aura is missing the common ice spikes on the end of her tail, where it is instead rowed with the basic spines on the top. Unfortunately, her tail is not prehensile, so she would have a harder time grappling through the trees. Furthermore, she is also cold to the touch, a trait uncommon with other IceWing hybrids.

Aura usually doesn't like to talk, and when she does avoids to manage contradictions at all times. Don't, won't, they're. She refuses to say any of them. She in general just doesn't like being around other dragons, unless she likes them herself, which is a conditional situation.

If she were to like someone in a romantic way, then she would have almost infinite tolerance, as long as she was sure that they loved her back. She will absolutely be obsessed with the before mentioned dragon, spending a large amount of time and effort on them. When it comes to friends though, it either comes from them sharing a common trait, or them being a friend of anyone who she is attempting to date. Otherwise, love still is a very rare sight to see from her, as she usually prefers to stick to herself or with a single trusted friend. As a friend herself, Aura is very reliable, often forming very close with the few she truly gets to know.

When Aura asks for anything, she gets it, unless the request is absolutely ridiculous. She inherited this strange trait from her mother, who was a very assertive IceWing. Strangely, she didn't also inherit her mother's insensitivity. Instead, she inherited the polar opposite. It turns out one of the reasons she likes avoiding dragons is because of how empathetic she is. She can easily relate to anyone's situation, and doesn't like being around other dragons too long because of how sad most of the dragons she grew up around were. Most of the people in her hometown were veterans from the war, so they radiated sorrow.

On a final note, Aura actually has no allegiance to a Queen, although if she were forced to choose she would say Queen Glory. That's only because she's heard good things about the RainWing Queen from her father, Cascade. Meanwhile, her mother, Siberia would always say bad things about Snowfall when Aura asked her about the IceWing Queen.

Skills: Aura is very good at hunting and trapping, and is able to easily capture even the most intelligent creatures. She is decent at defending herself, although not the best.

Aura was born in 5013 AS, like most of the dragons she has been seen around recently. From there and on she lived in a recently founded town named Sanctuary. Her father, Cascade, who was the most influential over her early childhood. Aura's memories are very fond of his presence, and are glossed over with nostalgia. He taught her about RainWing culture, including "sun time," and many other games they played.

Not all times fare well though, as Aura's father fell I'll when she was three and a half years old. He had always been a bit more sickly around the diverse group of dragons present in Sanctuary, but this sickness almost ended him. The only option to save him was to bring him back into his natural habitat, as he was not recovering sufficiently in the normally cloudy area Sanctuary was placed. The last thing he told Aura was, "I ... I would stay with you and Siberia, b ... but I don't want to die when you are so young."

From then and on, Aura grew up with her mother Siberia. She was not as much of an influence over Aura before, but now she would really get to know her well. What she did know at that point was that her mother was in charge of law keeping within the Bounds of Sanctuary. She was known to always get what she wanted, and many other dragons wonder why she left the strict circles of the Ice Kingdom. However, her punishments were often much more just than given credit for.

Only two other dragons ever got to know her softer side: Aura and Cascade. Finding that Aura was doing little other than idle around the house when she was home, Siberia decided to find something productive for her to do. Instead of having Aura perform disciplinary actions among the few prisoners present, like she had threatened. Siberia gave Winter, the founder of Sanctuary a tip on finding an assistant. She also, at the same time mentioned that her daughter had many good qualities and needed something to occupy her time with.

It worked out, but her time was consumed with many of the scavenger-related tasks which Winter considered his duty to complete. Unfortunately, that didn't really help Aura on any social standpoints. Otherwise, she gained a valuable relationship with an influential IceWing, and was taught many valuable hunting skills. She learned how to efficiently ambush and capture one of the most intelligent creatures around, but was never quite as interested in the scavengers themselves, compared to what they had made.

After two years, Winter once again made another important decision. He was going to travel to Pantala, in order to investigate the scavengers native there once again. However, he thought it would be too risky for Aurora. There had not been many recent contacts, and while Winter thought this had to do with the distance between the continents, he didn't want to be responsible for the death of a dragonet, especially since she had already been shot by a large scavenger crossbow already.

With her mentor gone, Aura was left with little to do again. Like the days before, she preferred either reading or idling inside, instead of playing with the other dragonets. Siberia though this was a problem, and mainly blamed it on her general lack of social interactions throughout her life. Siberia always found a solution though, and decided Aura would have to learn how to make friends the hard way. Jade Mountain Academy would force her into conforming, otherwise she would never be capable of making friends.

Aura was a little shocked when her mother had decided to reveal her intentions. She knew that such a place existed, and was a little excited, but otherwise overwhelmed by nervousness. She didn't know what other dragonets liked or played, or if they would accept her. But shortly after her arrival, something shocked her out of her stupor. The MudWing and SkyWing in her Winglet had been killed in strange ways. However, no one knew of it until a day later, when they failed to return to class the next morning.

That wasn't quite true though. Aura had found the NightWing in their winglet, Swiftclaws, weeping inside one of the hallways Aura frequented. "They're gone," she cried, "and I couldn't do anything to help them." Aura was confused, as she had no idea who had died or why it would be so important to the loner NightWing. Aura asked awkwardly, "uhhh, what did you see?" Swiftclaws wiped her eyes, and whispered, "please don't tell anyone, please don't."

After several other clumsy encounters, they became friends, but mostly because of Swiftclaw's secret. She was different from the other NightWings, and even her powers were different. Instead of seeing some of the potential futures, she only sees the past. They also managed to get together especially well, since they were both introverts. However, that small moment of peace was soon ended.

The new SkyWing had arrived, and it was soon confirmed that the MudWing would never be replaced. However, this was no ordinary SkyWing. He was a beautiful combination of Night and Sky (to Aura), but there was one problem. Falling in love with a firescales was suicide, but at least she wouldn't have any competition. Strangely, Aurora discovered some more of her mother's traits within her after this discovery. Sometime asking nicely for things doesn't work, and Siberia's way of marching up and seizing it seemed to make sense to Aura now. 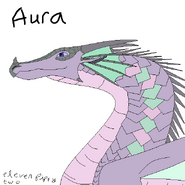 A headshot of Aura
Add a photo to this gallery
Retrieved from "https://wingsoffirefanon.fandom.com/wiki/Aura_(Remnants_of_the_Cold_War)?oldid=1774345"
Community content is available under CC-BY-SA unless otherwise noted.