abuse may be mentioned

he's your average looking sandwing, with strong talons and claws. in fights, he's noted as compelling and will most probably not give up. his scales (and snout) are a gradient of golden, yet dusty yellow (near his spine) that gradually get darker in colour and become a medium ochre. scratches decorate his body and his wing membranes are a faded gold, the same hue as his underbelly. he's usually seen either smiling with his friends, or scowling at caldre.

blunt and sharp, august is noted to have a snappy and impulsive personality. his actions, often regarded as irrational, are known to be provocative and he has a quick temper (most likely inherited from his father), which may be why he's always fighting an extremely fed up and frustrated icewing (caldre). his decision making skills aren't necessarily the best either and he gets into trouble a lot. however, he is quite extroverted and willing to make friends. when you get to know him, you'll realise he's quite empathetic and needs someone he can truly trust and rely on.

he's never met his mother and has a complicated relationship with his father ever since he was young. his father used to hit him, before august eventually taught himself to hunt and to fight back. in anger at his retaliation, cacti left august to fend for himself for several months, not returning. once on a hunt, august came across queen thorn, and begged her into letting her come to jade mountain academy. she said yes, and there he is in the silver winglet and is clawmates with dew (rainwing). he's close friends with dew and sera (skywing) and has developed a strong hatred towards caldre, the icewing of the quartz winglet.

august hatched in scorpion den, under the care of cacti (his father). at a young age, he was taught to never speak of his mother, his father would break things and hit him if he ever did. all august knows is that she was a sandwing and had left his egg for his father and never to be seen again.

his father was known to have a temper and easily angered, would often get into many fights, most of them fueled by his hatred and ire towards august's mother. august would unknowingly easily anger him and this resulted in his father hitting him and attacks. he learnt to never question and to never fight back.

cacti came home less and less, staying at bars and going on hunts for awfully long periods of time, leaving august to fend for himself. august, isolated, taught himself to hunt and to fight which helped him when cornered by unexpected strangers. his personality began to change, becoming more and more like his father: more feisty, more bold, more use of profanity. around town, he heard about a place named jade mountain academy.

one night when his father came home, he hit august again. this time, august fought back and his father outraged. this led to a huge disagreement, with his father walking straight out the door. august didn't see him for an entire month.

august heard more and more about the academy at jade mountain. when his father came back, it was chaos once more and cacti walked right out the door once again. august thought it was for good.

on a hunt, he managed to run into queen thorn, who was immediately startled at his appearance for someone his age. he begged her to let him go the jade mountain academy, saying he hated his current life and seeing that he was so helpless, thorn let him.

he arrived at jade mountain academy, his father not having the slightest clue that he had left for good. august was put in the silver winglet and made with friends with dew (rainwing) and sera (skywing) in his winglet. he grew to hate caldre, the icewing of the quartz winglet and they were known to get into fights.

tsunami eventually put a stop to it, sentencing them both 'detentions' in the library to prevent the fighting. mutual hatred is pretty much was happens during, and after these times.

august hated him. a lot.

that was at first. there simply was no reason for the hatred, it was most probably rivalry or jealousy. august had no idea why he was always noticing the icewing and getting extremely frustrated at whatever he did.

the insults started, both firing them at one another almost passionately. the other dragons were confused as to why they were so annoyed with each other. verbal it was at first, then the physical fighting. clawing, snapping, biting, thrashing; everything and it became a ritual at school - all the dragons coming to watch the fights.

tsunami and all the dragonets of destiny got sick of it, so she sentenced them 'detentions' - sorting scrolls into alphabetical stacks for future reference in the library. both august and caldre were extremely annoyed and the first few sessions were . . . bearable (terrible).

the fighting continues while sorting the scrolls. it's once when august suddenly has caldre pinned down against the floor and thrashing that the most absurd, stupidest thought comes to mind and he realises that he kind of wants to kiss him (which is stupid, i know).

the thought taunts him and the next detention session, august does it, approaching the icewing and kisses him angrily, full on the lips. to his surprise, caldre kisses back and for a long time, they do that, then they're grappling at each other again. "i hate you," he says. 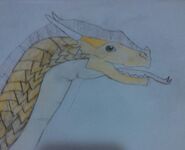 by cloud !!! tysm !!
Add a photo to this gallery
</div>
Retrieved from "https://wingsoffirefanon.fandom.com/wiki/August?oldid=986145"
Community content is available under CC-BY-SA unless otherwise noted.