Atomsplitter, Atom for short, is a NightWing physicist created by Matau99, for use in his roleplays and fanfictions.

Atomsplitter is overly paranoid, but not cripplingly. He expects the worst from everyone except his own species. He sees enemies everywhere. He always likes having a bodyguard, and if he doesn't he's terrified. He particularly fears IceWings, as most will attack him on sight. He is convinced the Talons of Peace have been infiltrated by elite spies of Glacier's army, and thus always is very suspicious even of his allies.

Atomsplitter is very smart and analytical, but not a very good judge of character. He has a talent for physics, and he loves nuclear physics in particular. His life work has been making a fissile nuclear weapon, which has been met with minute but measurable success. He has long tried to extract various chemicals from pitchblende ore, and has only gotten a few. He is high-ranked in the NightWing kingdom, but not extremely.

Atomsplitter doesn't handle danger well, and is a coward. He'd hide from anyone if he got scared. He would rather run than fight, but occasionally he will fight, most often to defend a friend or his work. He is awful at melee combat, and will usually be more of a problem than an asset.

A quirk of his that occasionally causes severe problems is his loyalty to science. He loves developing, experimenting, and researching, even if it harms others. While building a functional nuclear weapon would cause mass destruction and death, that is not something he is that concerned about, because it would be unprecedented in science. This is a point of contention with a close friend in particular.

He doesn't form friendships easily, but once he does it is difficult to break them. However, he has planned to never fall in love, and the only conceivable reason to would, in his opinion, to try to stop his tribe's extinction.

His favorite food is decayed fish. His favorite element is noctinium (on Earth, called californium). His favorite kind of science is physics. He is a hippopotomonstrosesquipedaliophile, someone who loves long words.

Since this event, he has been aware of his hither unknown romantic feelings toward Soulbreaker. The two of them are currently in love.

Atomsplitter was hatched to pureblood NightWing scientists in the heart of the Night Kingdom. He mostly stayed with them for a few years, sans various expeditions they took him on. Once he was old enough, he was sent to the NightWing dormitories like almost all the other dragonets. He didn't talk much, as he was more interested in his science. He met various peers, none of whom interested him. Once he graduated, he went into science as his parents wanted and selected nuclear physics as his specialty.

Since then, he's been dragged into a variety of problems by all of the Darkmoon dragons he's met.

Frost is a constant annoyance to Atomsplitter. He attacked Atomsplitter in the Constellation NightWing tunnels, always drags Atom into trouble, and has magic, which is obviously annoying to a scientist. Still, Frost saved Atom's life once, after Atom was virtually dead, so the status is neutral.

Soulbreaker is a friend of Atom, but no a very close one. They met in the Constellation NightWing tunnels, and she attacked him by accident. He reassured her that he wouldn't have her punished. She stole an animus weapon which he was researching, and was almost executed until Atom vouched for her. He later influenced Morrowseer into not punishing her any more than guarding her. Soulbreaker frightens Atom, though, as she is an assassin and they are notorious for being the most rogue section. He's come to count on her, as she helped him diffuse a dangerous meltdown. She is possessive of him, which is annoying but bearable. He has romantic feelings for her, as this incident demonstrates.

Darkmoon was an assassin who tried to kill Atom. She later was captured, and Atom could have killed her, but chose not to on principles. She later agreed to help them, and Morrowseer, in his fashion, tried to manipulate her to join the NightWings. Later, Atom learned she had feelings for him, and as he is uninterested in romance, tried to let her down easily. She later escaped, and killed a guard. In her fight, he aimed to kill her with a dart gun, and he hit her. She survived, due essentially to Atom's pacifism and knowledge of poisons. She was soon after ordered to be executed, but she escaped. Then Atom said something both true and hurtful to her, and she let Morrowseer execute her. She is now a SpecterWing.

Morrowseer is one of Atomsplitter's role models, for his efficiency and ability to put his tribe before personal wishes, morality, and mercy. However, Atom also fears Morrowseer for his extreme ruthlessness. Morrowseer often threatens (and performs) executions against Atom's wishes. All in all, Atom thinks Morrowseer is arguably the greatest NightWing alive, but he still is afraid of him. He would follow Morrowseer over Battlewinner every time.

Atom doesn't know Chessplayer very well, but he respects him for his intelligence and cunning. Atom is looking forward to playing chess with him, and thinks he is an excellent dragon and strategist.

Nightmare is one of Atom's best friends. She's a scientist, like him, and he loves to talk with her about the nuances of the field. Despite her odd coloration, he thinks very highly of her. Occasionally, they will spend an entire afternoon just discussing some technique or idea of nuclear physics.

Moonwalker is another of Atom's heroes. She is Morrowseer's dragonet, and as such he views her with more respect than he views the queen with. She's also saved his life, so he is in her debt.

Acidcreator is Atom's assistant. He thinks she's rather insane for the voice in her head, but then he is quite used to somewhat insane scientists. After all, that's the only way to be a mad scientist, which is, of course, the greatest thing he thinks anyone could be other than Morrowseer or related to Morrowseer.

Codecracker is Atom's and Soulbreaker's son. He loves his son a great deal, and he can't wait to make him into a brilliant scientist like him. Cryptography and cryptanalysis are minor hobbies of Atom's, and having a son who specializes in it is a wonderful thing for him.

Atomsplitter always carries a dart gun loaded with polonium (a lethal poison), just in case he has to fight someone. He has samples of various other radioactive materials in his lab, which doubles as his sleeping cave. He may or may not be radioactive himself; rumors abound that he is. He has a predisposition for mathematics, and he can think in three dimensions. While worse than useless in melee and mediocre at ranged combat, he is a reasonably good tactician and a better strategist. His personality type is an INTP. He is roughly equal at both experimental and theoretical science. 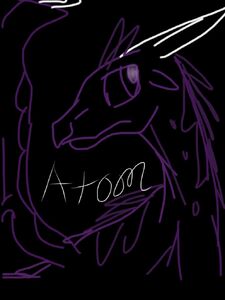 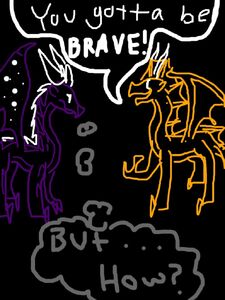 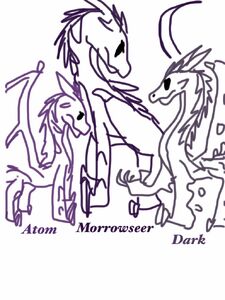 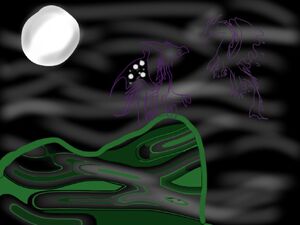 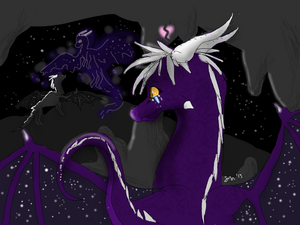 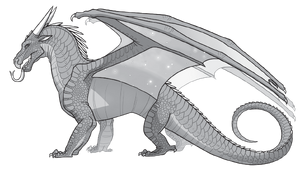 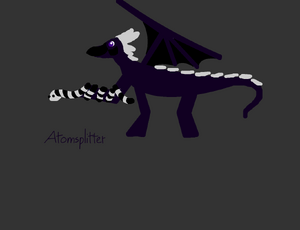 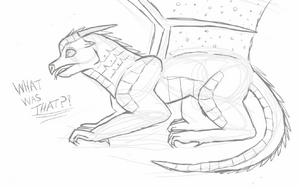 Atom. By Solar, for Matau. Sorry if I didnt get his scales right. 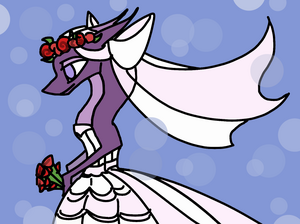 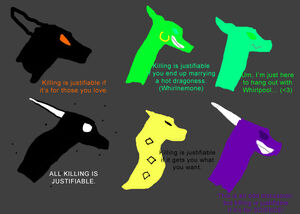 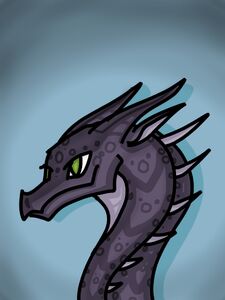 Add a photo to this gallery
Retrieved from "https://wingsoffirefanon.fandom.com/wiki/Atomsplitter?oldid=2050117"
Community content is available under CC-BY-SA unless otherwise noted.