Atlantic is a young SeaWing from a fanfiction by Queen Bluefire.

Atlantic has light aqua main scales. The scales near the top of his neck are a darker aqua,his underbelly scales are light aqua, and the glow scales are an almost white aqua. Both his chest and back frill are navy, with the spines dark aqua fading into dark green.

Atlantic has medium aqua eye-ridge scales and wing membranes. His claws and horns are a blue so dark it looks black. Ultramarine eyes are framed by silver glasses, the ends of which trail up his horns. Atlantic has a silver whale earring in each ear.

Atlantic is fit and athletic, with sharp claws and pointed white teeth. His voice is deeper then most dragonets his age, and has a musical lilt to it.

Generally he has a upright posture, however, he likes often leans forward to look at his scrolls, causing him to sometimes have cricks in his back.

Atlantic has all the normal SeaWing abilities, however he has learned several other skills. He can read most kinds of codes, due to him having studied them for years when he was bored. Atlantic is very smart, and he loves reading and playing around with codes and secret messages.

Atlantic is very intelligent, perhaps abnormally so. He learns extremely fast, and has surpassed all the dragons in his class.

Atlantic is very calm and sensible. He is always in control of his emotions, and thinks before he says something. He sometimes appears to cold, but he is not really. Sometimes he drifts out of conversations, mainly because he has been distracted by a thought or idea. He is not the best at socialising, tending to avoid other dragons.

Atlantic tries to be fair to all dragons, and to not judge to quickly. However, he is very gullible, due to him thinking the best of dragons and trusting to much. Many times has he been tricked because of this. Some dragons liked to take advantage of that, and Atlantic often suffered at their talons, though he never complained.

He is considerate, kind and thoughtful towards his guardians, often offering to help out or giving compliments. Atlantic tries his hardest to be kind even to the nastiest dragons.

Atlantic loves scrolls, and also helping dragons. His quiet disposition makes him a good healer. Currently he is still training.

Atlantic was born in the Deep Palace. His mother was a cook and his father a guard. They were very happy together, and were described as ' the family of laughs'. But all that changed in an instant.

Gull, Atlantic's father, was guarding the Queen's eggs when a hooded dragon attacked him. The dragon surprised Gull, and he was dead before he hit the floor. The hooded dragon then destroyed all of the eggs, smashing them to pieces.

Atlantic and his mother were shattered, his mother most of all. Slowly Clam became more and more unstable, before she fell into insanity.

Now Atlantic had lost both his parents. Despite this, he kept himself together, though he felt like he too would slip in insanity. Atlantic moved in with his Uncle Neptune, who regarded him as a nuisance and a extra moth to feed. Atlantic disliked him, and spent most of his time on a beach, reading.

That was were he meet Leopard, and flew into the greatest adventure of his life.

Atlantic has a huge crush on Leopard. He loves to be around her, and feels he can talk about anything to her.

Atlantic wants to befriend this grumpy SkyWing, but finds that Thunder keeps pushing him away and challenging his leadership. Later he and Thunder become fast friends.

Atlantic and Shadowseer are friends, and get along well. He enjoys her company, and likes to talk to her, however, he will always talk to Leopard over her if given the chance.

Atlantic is descended from a long line of healers. His great grandfather was the first dragon to sew back a limb. His family have some royal connections, and his great uncle's wive's brother married a SeaWing princess.

" I know it's hard. But life will go on."- To a friend about his grief

"A pigpen code! My favourite!"

"Leopard, you are the best thing that ever happened to me." 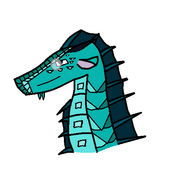 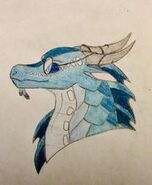 Atlantic by Mahogany The HiveWing 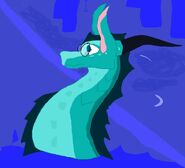 Atlantic by Forest The SkyWing Animus 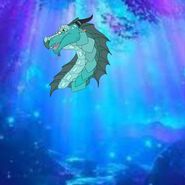 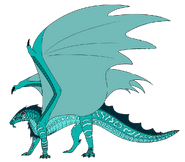 Ref by The Base Creator
Add a photo to this gallery
Retrieved from "https://wingsoffirefanon.fandom.com/wiki/Atlantic_(Queen_Bluefire)?oldid=2222863"
Community content is available under CC-BY-SA unless otherwise noted.