Athena is a RainWing NightWing hybrid princess. She has the build of a RainWing, but the common black scale base of a NightWing. Her underscales are purple, and so are her horns and claws. Her NightWing spikes make a pattern by going purple, pink, purple, pink. Her wingtips do the same. Her wings look like a purple and pink galaxy. Her eyes are lilac. Athena wears a moonstone bracelet on her left arm, and occasionally a crown of pink tulips on her head.

Athena is a true leader, and wise, just like the goddess she's named after. But, she has a weird obsession with the moons, as if they guide her. She is also very sarcastic, just like her parents and nothing like her sister, Princess Firefly. Athena hates Firefly, and they are huge rivals. They often play pranks on each other. Athena is also super competitive, and hates losing, especially her sister. (Which doesn't happen often)

Athena is the slightly younger sibling of Firefly, born seconds apart. Glory could tell Athena was the feistier on more leader-like of the two. As they grew up together, their rivalry got even worse. When it was time for the two to go to school, Firefly quickly made friends. It took Athena longer. Now, as they are growing older, they argue a lot and get into fights. Most are about who should be queen. 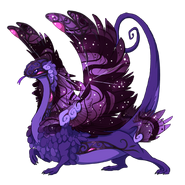 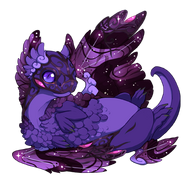 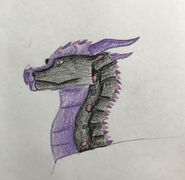 Athena by Sal! Thanky so much!
Add a photo to this gallery
Retrieved from "https://wingsoffirefanon.fandom.com/wiki/Athena_(Animal56)?oldid=1817858"
Community content is available under CC-BY-SA unless otherwise noted.