Astro was one of my older characters and I prefer if he's not used / edited in any way, he's really important to me and I don't like when others edit his page without permission. This includes grammar or spell checking, I can do that by myself without help, thank you for reading and please continue.

Hatched to utterly strange parents, Astro was always prone to act strange, he never had friends during his younger years. Rather his only company was books and his wizard parents, for quite awhile, the NovaWing had taken both an interest towards space and magic.

NovaWings are a tribe created by Entity.

“c'mon flick, i need someone to help me with studying the stars.”
- Astro

Bright navy blue scales, somewhat tall, slim body and a sombrero-like disk around his neck, look out moons, here he comes, it's Astro, science extraordinaire, but to most just another nobody who hangs out in the library half the time and one may notice him when entering the school library, searching for books about space. Although he'd appear your average NovaWing, navy blue scales, a lighter hued disk of a darker blue and an underbelly a darker shade and unusually large ears, a bright green cape-robe and hot magenta scarf don't cease to be eye-catching, making him stand out in a crowd, a light midnight blue sail with small rippling arcs runs from the tip of his head to the tip of his tail and upon it silver speckles, these same things can be seen upon the dark blue disc around the base of his head, cluttered like galaxian stars themselves.

Bright, baby blue eyes shimmer behind large green spectacles, the wires an identical hue to his cape, and sometimes a crooked, rather dusty wizard hat given to him by Flick, his legs are another case, rather long, with whorls of deep purple bubbling near the top, as if trying to break free of the glassy scales on top of it. This however can be seen on the very bottom of his paws, as through the blue gave in, the deep purple explodes and whorls with a indigo hue similar to his mainscales, although this is rarely seen since the NovaWing is standing on it half the time.

Astro's build is rather tall, tubby and yet stocky, but it seems as though he's not too tall and yet not short, more or less in the middle and one would consider him on the tubby side, having a rather roundish stomach and pillow soft legs, rather thick and therefore making his frame somewhat short. His shoulders appear similar to that of a cat's, rounded hunches with quick reflexes. His silk cape, both a large black heart on the back of it and on the front beat, cover over his... rather long, somewhat big wings, but if one were to spot him without this said cloak on, which is very rare in occasions, they'd see bright whorls of a brilliant scarlet and sometimes it shifts to a bright orange, mainly depending on how light or dark the room he current stands in is.

Upon the membranes scattered silver stars that almost seem to glow along with his scales in very dimmed light. Finally running across his front, usually hidden by his cloak, is a light blue, similar in some ways to the inside of his ears and the pale grey-navy fluff inside, is his underbelly and is one is especially observant, they may notice faint clouds of a grey-blue rippling across almost like stormy clouds, upset.

Upon the most unusual part of him is his horns, studding the back of his head, which if one where to observe closely seem to change upon each meeting with him, such as the usual slender and rather short horns that most see with a soft arc at the very end. But upon your next meeting you'd notice the horns, which to mention are a darker hue compared to his mainscales, may appear curvy, yet at the same length, but they appear as though a SkyWing's, they always seem to change and only the observant even notice Astro's slightly different appearance each time, either via his horns or completely hidden wings changing color.

“this is going to be great! i bet we'll be great friends! oh! take a look at this!”
- Astro

It only takes a glance and you'd notice such compassion for space, astronomical phenomenons, Astro is... not that of strange but pure and very enthusiastic if it comes to his interests, and if it's especially so, he'll never stop talking about it. Eyes shimmer with dreams of space, to touch the stars themselves and hold them in his talons, he is at the least a dreamer with a mind set in the clouds as usual yet in this would be... head over talons sweetness there's nothing he'd not do for his friends if it is, of course, in his reach. With a caring, pure heart, he loves giving his friends little gifts and will occasionally make little cakes for them, displaying a much softer, very kind side which is often shown upon his normal daily basis personality and, often times, somewhat laid back and casual. Astro has been in no ways through fighting tooth and talon as he believes these violent outbreaks get you nowhere in life but, put it simply, drag you deeper down the wrong paths, rather he stands for the more peaceful roads.

The NovaWing can, sometimes, be a little too trusting of others almost to the point he has nearly gotten others killed, one could think of this as... gullibility in a way, although if one is to convince him to commit towards violence, there's a huge chance he'll say no and leave. He's your typical nerd, loving of books yet unlike most isn't on the socially awkward page, more nobody doesn't want to hear about his constant banter of new discoveries and in often times, leave him rather lonely and friendless. There's still a lot of floofy kindness all over his snout, often times one would believe he's too kind for his good will, even if he doesn't expect a thank you or even a response, Astro strives to make those around him happy or even smile, even if it's just for a couple of minutes, he's one of those dragons who gives small gifts to those he believes are friendly, a little welcoming object to make those who receive them feel special.

Even then, there are times when he can get very... aggressive in, well, his own way, more he just needs some time to be by himself, trapped in his room reading or just crying himself to sleep, not everyone can be all positive and he's one for standing up for himself or his friends if needed. The thing is, he's not good with threats, more he doesn't do that kind of thing and, most of the time without thinking, will make a series of ridiculous animal noises as if that would scare someone off, growling and hissing, then again it makes one want to laugh more than act frightened of this strange action. But altogether, Astro is honestly a very compassionate dragonet, with the biggest (and in some cases strangest) dreams, one of the most determined goal being touching the rocky surface of the moons, to prove to everyone there is much more to space than just stars and the moons with the occasional comet.

“i'm not crazy, you guys just think i dream impossible things, but i swear! this, this will be possible. it's not just another one of my fantasies.”
- Astro

“i don't know much about my past, but i don't let that stop me from dreaming about the future! we're in this together, guys!”
- Astro

dang it, i'm redoing this.

“not to downplay your contributions, but you actually didn't help us at all, in fact you made the situation much worse by acting violent towards it.”
- Astro

if you think they could possibly meet and we've had a decent conversation, feel free to add them to his relationships

They are Astro's first of few friends and he'd have to say, they're quite a nice dragon, once you get to know them.

While it may have been a strange introduction at first, having nearly hit them upside the head with a heavy bookshelf, things have seemed to mellow out a bit. Actually, quite a lot. The two seem to share a few common interests, that mostly being books and stars, although Flick isn't as interested as Astro is. But they're interested in stars nevertheless!

He doesn't know what to really think about their relationship now, while they may sometimes come off as rude or pushy, he seems to contradict that with his affection and sweet smile. Even then, Astro is slightly intimidated by this dragon, he doesn't understand why, perhaps it's just in their stance or personality. It just... happens.

Even if they come off as rude, the NovaWing enjoys their company big time, the SeaWing seems more understanding and incredibly resilient towards accomplishing their goals. It's one of the main reasons Astro convinced them to help him be the first dragon to land on the moons. Even if they sometimes say it sounds impossible, he knows they believe that it would be really cool to see.

A first glance at this brutish dragoness, Astro was determined to befriend her, for there was just something about Susie that made her stand out. That fate was telling him that he needed her on his side, he didn't entirely understand that part, but he just sorta knew. Now she can't help but sometimes surprise him with small acts of kindness, something she's working on now, ever since befriending him and Flick.

doesn't,,, have much of an opinion on them,,, has met them now and then at school, but other than that, he has no comment.

“don't worry guys. as soon as this is over, i'll bake you all a yummy cake!”
- Astro

note: when drawing him, feel free to mess around with the shape of his horns and add fur if you'd like 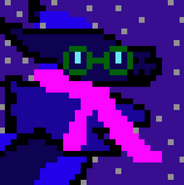 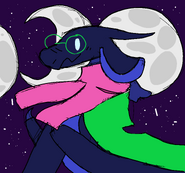 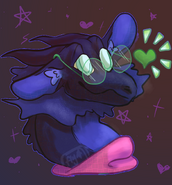 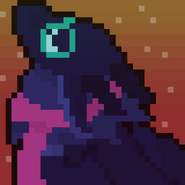 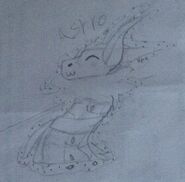 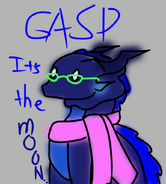 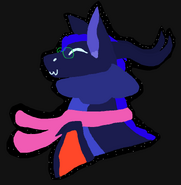 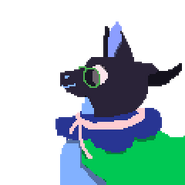 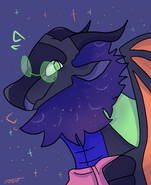 entity
Add a photo to this gallery
Retrieved from "https://wingsoffirefanon.fandom.com/wiki/Astro?oldid=2205764"
Community content is available under CC-BY-SA unless otherwise noted.