this character belongs to Fear

Ashling is, in comparison to most, a generally average NightWing. The only things that are noticeably different in comparison to others are really just the opalescent teardrop scales near his eyes. His build is somewhat closer to the thinner side, but he's fit with his slim and taller stature. His tail is shown to be longer than the typical NightWing's, with his wings being at an asymmetrical length - one being slightly larger, the other slightly shorter. His snout is rounder, with his scales having a smoother texture too.

Ashling's color scheme is relatively simple: white, blue, black. White is an odd color on a NightWing, but it's there. His primary scale color is similar to the color of carbonado (a black diamond), including the shine that his scales reflect. He has azure secondary colors, with his third color being (as previously stated) a pearly white. His underbelly is this same pearly white color. There are also dots of white that go down each side of his body down to the tail tip. His eyes are a bright, light blue; his horns being a slightly darker shade to the pearly white color.

The NightWing appears to have been born with some sort of issue since his spines are more like bumps rather than the normal, wispy spines of Night. However, this doesn't affect him much at all. His talons are a deep sapphire blue, with his teeth being the color of ivory.

Ashling is very quiet. When he speaks, he's very gentle in tone but firm with opinions and beliefs. Though he is quiet, a certain dragon may say otherwise, as he's very talkative towards him.

Overall, this NightWing is very kind towards whomever he runs into, despite the fear of finding out what others think of him due to his ability to read minds. Although he's learned to eventually control this, he slips up and does so unintentionally sometimes.

Ashling can be very kind, shy, and friendly, but if you disturb him during his creative mood; he will certainly lose his mind and most likely snap at whomever bugs him. Even if it was an accidental motion or anything related to such.

Marion - As you can imagine, Ashling and Marion's relationship is very strong. Though they do struggle with a few things such as communication and silly little arguments, they do in fact love and care for one another very much. Ashling feels very calm and collected around Marion, feeling as if he can be himself around the hybrid. Also protective. Very protective. 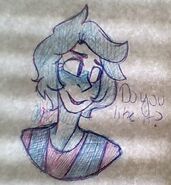 By Luster
Add a photo to this gallery
Retrieved from "https://wingsoffirefanon.fandom.com/wiki/Ashling?oldid=2184080"
Community content is available under CC-BY-SA unless otherwise noted.