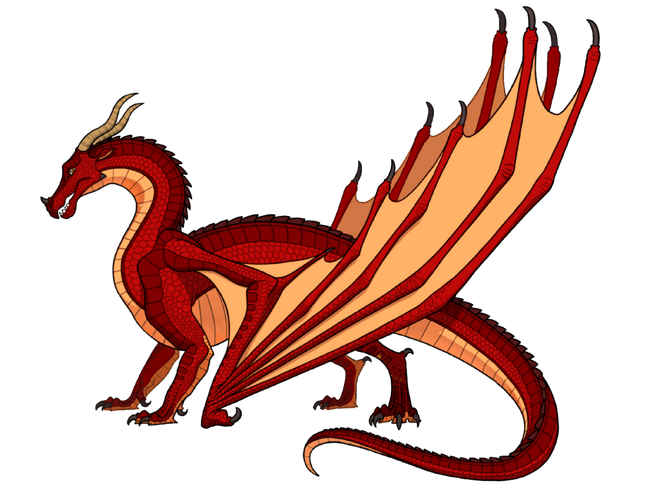 'A R S O N'
This character belongs to Anazari. Do not steal/edit/use without permission. Coding by AvalonCat, edited by Sby.

Once a tame SkyWing named Fireborn, now a dangerous criminal.

He only loves one thing. It's a dragon. Crackle. The only childhood friend who didn't leave him.

We'll be raising our hands, shining up to the sky

A P P E A R A N C E'
"Feel the fire!!" *cackle*Arson is a SkyWing, and he looks like one. His mainscales are dark red, and are paired with fiery orange underscales/underwings. His horns are pale orange, and his eyes are dark orange. A fiery glow always seems to surround him, and a terrible grin is ever present on his face, along with a dark black eyepatch over his right eye, covering a eerie grey eye; a old injury from 25 years ago...
Cause we got the fire, fire fire'Yeah we got the fire, fire fire

P E R S O N A L I T Y
"The old me is gone! It's time to meet the new me!"Young Arson and older Arson are very different.

Young Arson (called Fireborn back then) was an innocent and sweet little SkyWing who loved to run and fly around, laugh, tell jokes, and just have fun. He hated mean dragons, and he and his friends were very tight.

But now he's not fun anymore. He's cruel, and isn't afraid to destroy anything and anyone that tries to stop him from burning down whatever building he can. He loves to see a beautiful building burn to the ground, and hear the screams coming out of and around it.

But one thing makes him the shy, kind dragon of his childhood. Crackle, a small and thin crimson-colored SkyWing. The only one who didn't push him away after "the incident" years ago.

H I S T O R Y
"Everything must burn!"25 years ago, Arson was hatched by the name Fireborn, given to him by his parents, Volcano and Rage. His parents were sweet and kind to him, and tried their hardest to keep him safe, because of his firescales.

Some dragons with firescales were treated poorly, but Arson (Fireborn) was not. His parents cared deeply about him, and though they were cautious about his firescales, they never made him feel bad about them.

And even as he got older, his life was much like most of the other dragonets'. He played around with friends, and they didn't mind that he had firescales. They even helped him not burn things when he walked around.

But one day, everything changed. Arson was playing on the rocks near his home alone, as most of his friends were gone for the week with their families elsewhere, so only Crackle had stayed near their village.

That particular he hadn't been able to find her anywhere, so he was left to play with stones by himself, pretending they were different heroes from history, fighting of dangerous animi and deep sea monsters.

"Anyone who wronged me will pay!"

1 of 2
Add photo
When the light started up, they don't know what they heard