★APPEARANCE★
Ares is a muscular and large SkyWing with electric blue eyes and dark red scales. His underbelly is a pinkish reddish color with fire like lines across it. Near his spikes along his neck to the end of his tail is, which is a long line, is orange and red too, making him a firescales.

His wing membrane is a light red near the wing tips but fade to orange; his wings resemble a sunset somewhat. He has jagged teeth and claws, he wears no jewelry at all. At the front of his feet, he has slight orange markings and his back of his feet too have the orange markings as well.

The scars on him were from spears and other stuff, his wounds go untreated and are like that due to being firescales and his wounds can't be healed. Ares, too, is attractive and smoking hot [no pun intended] to most dragonesses but avoid him due to his scales and not let him continue his lineage with females 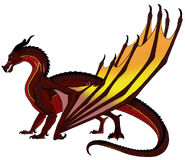 Hera- Mother; Ares loved his mother the most out of his whole family and was smothered by her and Zeus. He felt better than everyone else, besides her being rude to him sometimes. She didn't kill him but instead, she let her son live. Ares' opinion on her changed after he became an adult. He got tired of her nagging.

Hephaestus- brother; Ares HATED him and scarred him for the rest of his life. He tormented him for

Retrieved from "https://wingsoffirefanon.fandom.com/wiki/Ares?oldid=1612325"
Community content is available under CC-BY-SA unless otherwise noted.