DO NOT USE OC OR PART OF IT IN ANY ROLEPLAY WITHOUT CREATOR'S PERMISSON!

Arcticus - The roleplay character owned by MaciejMMMMM. He is an Icewing Captain.

General of the Border Fortress

Whoever queens appoint to die

Normal Icewing look, with pale blue, almost white, scales and green eyes. Noble but not stern facial features. Slim and well-built. He makes up for physical defects with quick thinking and his mind. Icewings in the court always said that he was both handsome and charming, although he never talked about himself this way, knowing about his many flaws and troubles, always trying to remain modest and humble.

An intelligent and talented dragon. A brilliant leader and tactician. A bit reserved for other tribes, anticipated for all hybrids except those of nightwigns and icewings because he always had a soft spot for nightwings, which he was trying to hide to avoid a scandal in the army.

When he was still in the palace he was the soul of the party. He could dance well and sing quite well. He always entertained guests at the numerous balls of Queen Diamond. Dragonesses liked him, he was always dignified and nonchalant, never cold or coarse, referring to everyone with respect and friendship. He often fell into quarrels and fought in many duels, but he was never even wounded, his scales always remained intact the next day...

He is just a simple Icewing, connected to the royal family but he is not an animus. Many years he spent training in using a bow, a very underestimated weapon, despised by most of the Icewing forces, however Queen has her own Marksman guard, which Arcticus was commanding for a long time.

His parents were high-ranking officials from the second circle, serving in the palace of Queen Diamond. From the side of the sword line, he is related to the royal family. His mother's name was Flurry, and his father was Glacias. He also has an older brother, Nivilis, through whom most of his life was somewhat in the shadow, but he managed to prove to the family that he was worthy to bear their name, by stopping the assassination attempt on Queen Diamond herself (One of Snowfox's plots).

He has only few items he really likes. He always tries to keep his bow, Belethronding close to him, in case of self defense or contest. Dailir is an only arrow he use for the bow, its enchanted to always hit the target and always return to the dragon holding the bow.

In his vault in the fortress however he hides his most precious item, a scroll. His close friend, squire and cup bearer, Arklighting made it for him a long time ago and he kept it ever since. The scroll was an animus touched object, able of casting spells like the one Darkstalker made for himself to protect his soul. Little the court knows that the well protection and the informations they receive so accurate and precise, they are caused by the fact that Arcticus created a crystal mirror that could show him what he was ordering or needing at the moment.

He grew up in the Palace together with his brother and parents who served there. He spent most of his time not in strength training but in the library over the scrolls, learning and exploring all knowledge he could access to. After time, he managed to stabilize his position in the rankings and joined the army. As an army officer, he is always obedient to the orders and faithful to the Queen, who he truly loved but managed to keep his affection secret. Stubborn and ruthless, but not cruel, he always respects the code of honor, he is a patriot and conservative. Above victory, he conveys the welfare of his soldiers, not always serious and very social. He spends most of his free time with his subordinates, helping them at work, eating meals together (Which is a rarity and is considered to be a fuss with the lower rank). After years of service in Queen's Guard he received a reward, the rank of the general of the one/third of the army and position of the commander of Border Fortress, which is guarding the entrance to the kingdom. It is located in the south west of the border, protecting that pass of the border which isn't under influence of Gift of Defense.

It proved to be a good decision. For a long time he was managing the stronghold as no one ever before him. He even ordered the construction of the line of outposts to better control the animus wall. But the court always despised him and even hated him, as he wasn't very "icewing" in some ways. He was always humble and never swagger over his soldiers and officers from lower circles. He was eating with them and helping them with day to day activities, often laughing and chatting, not as their superior, but one of them. He was gifted in strategy and tactics so he managed to win the series of campaigns in Sky and Sand Kingdoms. But once he lost, his expedition army was ambushed by Queen Scorpion forces during their march back north. He was the one to blame for it, even tho it was the court ambasador in the army who ordered the army to set a camp in a valley. He lost his only chance to get back to the first circle and never again showed up in the palace after that. He remained in fortress just doing his job.

Arcticus wondering among the battlefield (Art by Path_Finder_627) 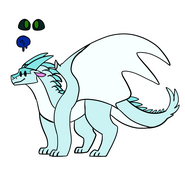 Arcticus (On Jada's base in colors by MaciejMMMMM)
Add a photo to this gallery
Retrieved from "https://wingsoffirefanon.fandom.com/wiki/Arcticus(OC)?oldid=1660698"
Community content is available under CC-BY-SA unless otherwise noted.