Start a Wiki
Ack, hello y’all. I made another OC. Help I think I need to finish my other ones but NOPE! Well here we go let’s do this. Also mature content. A short story about him appears on Fanfiction Requests, Fufilled!!

Sober up by AJR

His unknown parents and his sister

Being cold, remembering the night before

Apollo looks like a dragon who was once beautiful, but faded away like an old photograph, just a memory of what he once was.

Apollo doesn’t look like any other dragon. His scales are a pale yellow like a SandWing‘s, and his horns are straight and are a dark gold. Apollo’s eyes are dark blue, and always have a glazed over look to them. His spikes on his back are a darker gold, and look like a skywing’s except they’re longer and straighter. He has a tooth that sticks out of his mouth like a rainwing’s. His underscales are a lighter yellow. Apollo has three stretched-out-S-shaped scars under his eyes. He has a spike on his nose like a SkyWing also.

Apollo always has a light smile on his face, and his eyes have a lost look to them, like he’s not where he is. His tall and skinny, you can see his ribs a bit. His wings are very large, and look like a sunrise. On one wing there’s a large bright whitish yellow circle like the sun.

Apollo sometimes wears a bandana around his neck, usually a light blue one or a red one. He also wears a thick golden bracelet around his wrist.

"So I'm named after a god. Well where has he been all my life?"

Apollo is a strange kind of guy. He’s definitely not good. He’s not very nice either. He‘s sarcastic a lot, and never seems to take things seriously. He could be in the middle of a fight that he could die in, and laugh in the other dragon's face. He doesn't fear death.

He used to very egotistical before his life got bad, then he stopped caring about much.

Apollo’s life was never what he intended it to end up like.

His life began normal. Only child, okay parents, friends. He always had a talent for singing. When he got older he decided to follow his dream of singing.

He left his house at a young age, not fearing what came before him, he was never one to worry about stuff. When he moved to Possibility he started performing.

He started playing in bars and such, and everything seemed to be going fine. He got some money, had a girlfriend, but then things started to go downhill.

Apollo never seemed to get popular, and people made fun of him a lot, and certain people wouldnt hire him because sometimes he got angry at other dragons and would fight them, which made him more angry. He started to drink.

Apollo became an alcoholic. It started with him sometimes getting drunk, but then soon he was getting drunk all the time, drowning out his failures of not hitting it big. He didn’t mean to, it just kinda happened. His girlfriend got sick of him coming home drunk, and left him, and he wasn’t allowed to perform anymore in certain bars.

Eggnog: Which is worse, ignorance or apathy?

Apollo: I don’t know and I don’t care 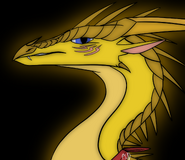 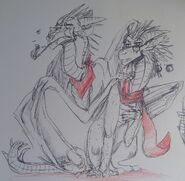 Apollo is on the left, by IntergalacticFly!! Thank you!!

By Ronin Miyamoto!! Thank you!!

By Tailbite the SeaWing!! Thank you!! 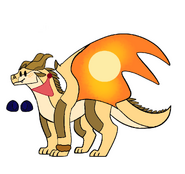 By Pearl336!! Thanks!!
Add a photo to this gallery
Retrieved from "https://wingsoffirefanon.fandom.com/wiki/Apollo_(Sparrow)?oldid=2105955"
Community content is available under CC-BY-SA unless otherwise noted.