Start a Wiki
S N O W B A N K
This does not belong to Darkstalker. Base code by Element, Grape Cakes, Galaxzzy, and AvalonCat. 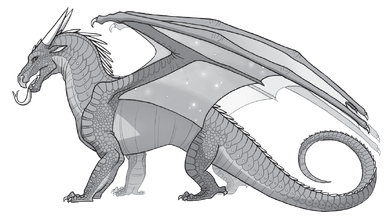 Personality
Their mind has told them the world is going to end their whole life, so they don't really fear anything. A dragon tries ro stab him, he continues to talk to them like nothing happened. He isn't an idiot, but he is desensitized to danger. It just doesn't register anymore.

Positivity is his midle name. After all, every day they wake up to the knoledge that they where wrong. His heart didn't stop. He is still alive. If one thing does go anything like his vision said it would, even just tripping, he has a panic attack.

They don't trust anyone new for a while. Since they keep seeing their own doom by others talons and need to know this isn't possible first. They do fear that everyone is faking it however, and that his future does invole them all backstabing him. He tries not to think about it. 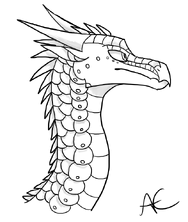 Abilities
Apocalyspse Seer has never actually seen the end of days. His true power is a slightly clouded mind reading. Rather than hearing the imidiet thoughts of other dragons, he hears their "dark thoughts" (thoughts that pop into your head, that don't think you would create, weather they be angrey or inapropriate). Though he most certainly hasen't thought of it, they would make good blackmail. They can both breath a suprisingly strong flame and blend into shadows.

Trivia
Was an attempted at an anti red and black OC (Dark powers, looks, etc but really just an anxious dragon with a weakened mindreading.

Retrieved from "https://wingsoffirefanon.fandom.com/wiki/Apocalypse_Seer?oldid=1919124"
Community content is available under CC-BY-SA unless otherwise noted.