that one dude who scammed him like a month ago. how dare you hack his neopets account and steal everything how dare you

do not call me out for writing it like homestuck I will eat ur ankles if u do. im just tryna flesh out my writing some more ik it sucks poopy okay,,,,,,

your name is APATITE.

you're a normal merchant rainwing in the most run down neighbourhood of possibility. though there are gross looking customers you get every single morning, you, on the other talon, are basked with magnificent glory from head to claw.

your scales are masked with frost green. though it's rather plain, it's much more better than the distasteful lime green you were born with. your underbelly is similar, just becoming more paler. your horns, snout, and the diamond shaped markings running down your back are a bright pink, your snout is more of a rose pink, and your frill and spines are shade of pale pink.

with your eyes being black, there is one final thing to note about your looks. wrapped around your wrist is a silver bracelet. even though it looks like it has no significance whatsoever, it means the entire world to you. locked between its silver shell hides the power to allow its wearer to become whoever they want, only if they know who the dragon is and what they look like. though extraordinary, it isnt exactly flawless, either. 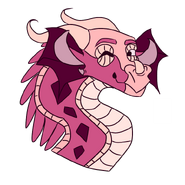 a drawing from your wonderful fan! you thank the dearest lacey.
Add a photo to this gallery
Retrieved from "https://wingsoffirefanon.fandom.com/wiki/Apatite?oldid=2304492"
Community content is available under CC-BY-SA unless otherwise noted.