Antheraea has light beige scales, a golden-orange underbelly, and lavender spines and wing membranes. She has short claws that are slightly curved. She has white markings like snow moths on her back, and her antennae are medium orange like leaves in the fall. She wears a chain with a pouch on the end that contains her library card and a small wooden carving of a fox, which was a gift from her dad. Her eyes are a grassy shade of green.

Her body shape is fairly average, not overweight but not skinny. She falls pretty much in the middle on the height spectrum, maybe being a tiny bit taller than your average SilkWing, but not as tall as her brother. She is a little clumsy, having legs and wings that are a bit big for her body.

She usually wears a small, contented smile on her face. Her eyes sparkle with an inner spirit of curiousity, and she sometimes seems like she's on another planet in her mind. She walks with a bit of clumsiness, not very graceful or athletic. When she flies, she beats her wings strongly and with confidence. In the air, she moves much more gracefully and confidently than on land.

She blends in with the crowd for the most part, with her lack of bright colors. Sometimes, however, dragons notice her for her simple beauty. Her shades of beige, gold, purple and white blend together nicely, and her kind smile and sparkling green eyes add to the effect.

Antheraea is a kind and caring dragon, but she can be shy. She'll gladly accept friendship from anybody who is kind to her, and she is a loyal and kind friend in return. She is mostly an introvert, but she is more open around her friends and family. Her favorite things are sunlight, scrolls, and honey. She also enjoys spending time with the people she cares about, and for this reason usually likes school.

When you first meet her, she seems like your typical bookworm: shy, quiet, and smart. In a way, she is. However, she has much more to her personality. She is also loyal, kind, caring, and friendly.

She will gladly take friendship from anyone who offers it, and does her best to be a loyal and kind friend in return. Despite her more introverted nature, she opens up easily to her friends and family. She enjoys spending time with the dragons she cares about, which is part of why she likes school.

She really enjoys books, scrolls, honey, and sunlight. Ever since she was a little dragonet, these things have brought her comfort. Books have a special place in her heart, and she loves to read. Her favorite genre is mystery, because she enjoys the suspense and likes truing to piece the clues together.

Antheraea has normal silk, but is still working on controlling it. In the six months she's had silk, she's worked on trying to learn to weave well. She has made things with her silk, such as scarves and bracelets. She has also practiced using silk to help with defense.

She's great at climbing, and her claws are slightly serrated. As a young dragonet, one of her favorite things to do was climb around on whatever she could. Climbing has always been a skill she's been good at, and it will probably stay that way.

She has slight flight issues, because she hasn't done a lot of flying in her short time with wings. However, these are very minimal, and her flying has gotten much better with practice. She is fairly good at flying, and more graceful in the air than she is on the ground.

She also has a great memory. Her memory is certainly not photographic, but anything she finds interesting will probably stick with her, at least for a while. The downside to this is that she tends to forget the things she's supposed to do, instead choosing to remember the interesting facts or exciting stories. She has a pretty good eye for detail, and is decently observant.

"N-no, it's fine." - in Lost Lies when she runs into Stinger

"Um, hi. I'm Antheraea, named after a type of butterfly. I came here with my brother, Atlas...um, we lived in Mantis Hive for a while before moving to the new SilkWing village on the Talon Peninsula. I like books, art, and exploring. My favorite thing to do is read, especially non-fiction or mysteries." - introducing herself

No matter what Dromedary says, I still think figuring out mysteries like ominous speeches and eerie white eyes is just as cool as learning herbs and how to heal. - thoughts about enjoying solving mysteries

Antheraea was born in Mantis Hive, where her parents met. She was raised by Moth, her mother, who was a librarian, and Cloudstreak, her father, who was a carpenter. She was named for her scale color, which matched the antheraea moths, while her brother was named after the atlas moths that lived near their home.

Antheraea and her family had a happy dragonethood, with her parents bringing in enough money to live decently. She went to school at Mantis Hive Academy, the school for the dragonets in Mantis Hive who didn't go to any special schools. She and her brother were happy there, and everything was great until t was only a few days away from Antheraea's hatching day.

Shortly before she was supposed to turn five, Antheraea's mother, Moth, came down with a mysterious sickness. She was having tremors, spasms, and shrieked in agony. They found a little black starburst on her ankle, which spread and killed her. They later found a dragonbite viper in her room, which must have been planted there to kill her. Ever since them, Antheraea has been afraid of snakes.

Later that year, Cloudstreak made the decision to move to Pyrrhia and start over. They traveled by boat, and the journey took about a week and a half, maybe two weeks. He was grieving Moth's death, and he had serious depression. He relocated himself to Prosperity, the new SilkWing village on the Talon Peninsula, and brought his two dragonets with him.

Antheraea and Atlas went to school at the Talon Academy, and they made a few friends there. Their life stabilized again as they got used to life on Pyrrhia.

When she turned six, Antheraea got her wings. She learned how to fly, and she got to enjoy the freedom of the sky. Six months later, she got an invitation to Jade Mountain Academy.

Crayfish was Antheraea's first friend at JMA. He has helped her with a lot of things, and she values his friendship. There may be something more in her feelings for him, but she's not sure. She enjoys the support he gives, and has many fond memories of their experiences together.

Stinger and Antheraea are friends, and their bond is strong. She thinks of him as a friend mostly, but she does think he's handsome. They ran into each other in the halls of the academy, and since she helped him uncover the mystery of his sister, they have been even closer. She appreciates his similar mind, and he has helped her through some troubling times.

Antheraea appreciates the kindness of her SandWing clawmate. They've been good friends since the first day of school, and their bond has strengthened through the trials of the recent past. Dromedary's outgoing personality encourages Antheraea to be more social, and they've had some fun times as well as some rough times.

Antheraea and her brother are close, and have been even closer since their mother died of the dragonbite viper. Their bond was further strengthened throughout the trials they dealt with when fighting the Red Widows. 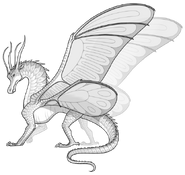 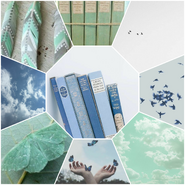 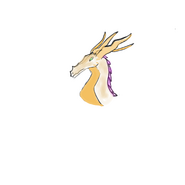 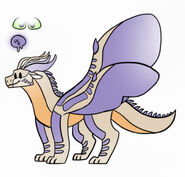 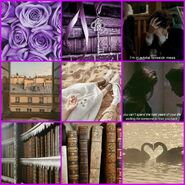 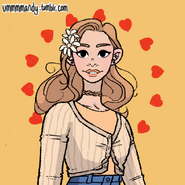 Human version by me
Add a photo to this gallery
Retrieved from "https://wingsoffirefanon.fandom.com/wiki/Antheraea?oldid=2018527"
Community content is available under CC-BY-SA unless otherwise noted.