This is a character that now belongs to Verglas, please don't use her without permission first, thank you!

sorta revamping her,,, she's a nurse who helps those in need within the rainforest kingdom

The being of this world, made of pure joy... put it simply she's an eye-catching dragonet, although not prided on it, rather she just enjoys hanging out with others, truly a rare occurance to see a tribrid like her, but here she is... Anteater. Bronze scales, all aligned in soft patterns, it rather remains a light brown, showing off the MudWing side this is followed by hints of slightly lighter colorations to display a faint underbelly, yet never really shows much of any other color. Yet a more noticeable feature, the rainbow scales, rather flat, running upon her back, this however starts at the base of her head, following through with red, fading into the other colors. Pumpkin orange eyes, illuminating compassion, empathy and cheerfulness, she always wears a kind smile upon her snout followed by the sweet wavering scent of jungle flowers and mud.

Round, perked ears with a kindly gentleness to them and, with that white-cream horns, sticking from the back of her head and curving upward, rather standing on end would be a better description, this remains the coloration of all Anteater's claws and talons. You may notice the vibrant colorations on the bridge and uppermost of the tribrid's snout, rather like the scales running down her back, they stand out in streaks of rainbow colors. While upon the forehead, there's a nice blend of neon greens, fading into a light blue, navy and finally a nicely blended magenta near the curve in her snout. Rounded edges to her spines running down her back, following the flat scale plates, this is the great time to mention the dragonet's small wings. They aren't on the showy side, but they do seem to have some attention given to them, rather they remain sandy golds with faint hints of green at the edges and, at the base a nice mahogany. It's more in a sunflower-like pattern, pushing itself into the different colorations as though ink in water, lovingly dappled with fine brown golds rippling across the surface of her membranes.

Her frame is stocky, give you that, rounded shoulders and rather well muscled legs, despite their short size, she could be compared to that of a dog, really, long, curvy tail, strong legs and lean build, good for running if that was ever necessary in the rainforest. Her tail is, to be mentioned, rather short, the thickness in it softened by both her SandWing and RainWing genes, yet it seems long enough to get caught around her legs if that was to ever happen when running. Anteater is a sight for sore eye, really she is, rather she is... unique, one of a kind, not really one of those characters you see very often and far from normal, truly a lovely sight.

Despite being most like a MudWing, she has the pure personality of a RainWing, not lazy, but bubbly, cheerful, sometimes quite oblivious, and imaginative. She's always thinking of things to do, And is happy with her life, though she wishes dragons would pay more attention to her. Anteater loves music, and plays it all the time.

Anteater was born to a MudWing, her father was a RainWing/SandWing hybrid, she never knew him, because he was captured and killed by Burn, for his odd looks. Her mother, Dirt, tried to keep her appearance down, but soon enough, they realized she was a mixed tribe dragonet. The rest of the tribe hated her, and she wasn't able to get into any unsib groups, so her mother took care of her. She became very skilled in healing, and so her mother sent her to Jade Mountain Academy. There, she was put into a winglet that consisted of hybrids. She’s quite happy, having the freedom to do whatever she pleased as long as she got her schoolwork done. 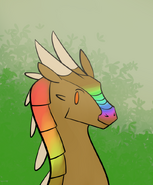 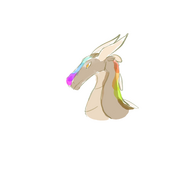 yinjia
Add a photo to this gallery
Retrieved from "https://wingsoffirefanon.fandom.com/wiki/Anteater?oldid=1940462"
Community content is available under CC-BY-SA unless otherwise noted.