Line art by Butterflydragon666, colour by me

The fact that she's a ghost

While she was alive, the normal IceWing abilities, now she has the ability to see other's greatest desires

"All will pass in time"

Antarctica was made for a colour contest. Please don't steal her. Coding by FenrisWolf1655

Antarctica had white main scales, and a light grey underbelly. Her spikes and diamond shapes on her crest were a really light lavender, and her crest light blue.She is small and slight, with little muscle. With her soft colours, she really hasn't changed much after becoming a spirit. The only main difference is that she is misty and slightly transparent.Antarctica is thin and small, with sharp talons.

Unlike most IceWings, she had striking violet eyes, which were always kind and cheerful. Antarctica almost always smiled, and her mouth was curved upwards.

Since she was born to a fairly poor family, Antarctica never wore jewellery or bags, prefering to not be hindered by such things.

Antarctica is loyal, wise, and confidant. She is always smiling, and loves to bring joy to others. While being bubbly, warm and sweet, she is also wise, and likes to reflect before she does something, rather then rush headlong into it. It hurts her when she sees violence and hatred.

She loves the simple things in life, like well made food, the smell of scrolls, or little quotes. Antarctica wants to dedicate herself to undoing the damage caused by war. She is very gentle, and hates to hurt even a moth.

However, this gentleness is also her weakness. She does not like to point out uncomfortable truths, nor tell others about their weaknesses.

Ulike most young dragonets, Antarctica was very wise for such a small dragon. She would often spout out words of advice, which often surprised older dragons.

She also loved to fly and swim, and often swam with narwhales, claiming she could understand them.

Now that Antarctica is a ghost, she can do many things a living dragon cannot. For example:

Antarctica was born to a minor family, in a village nearish to to the Ice Place City. The village, which was by the sea, was full of snowy homes, ice sculptures, small moon globe trees that gave light to the dragons, and tinkling strands of icicles.

All the dragons in the village knew each other, and the general feeling was of one big family. The dragons who lived there did not follow the Ranking Systm.

Her family lived in the middle of the town, next to a huge sculpture of a lynx. For about five years they lived fairly happily, enjoying life. Antartica liked to climb the statue, and fly over the town. She was well known for her cheerful, gentle personality.

But then disaster struck. One seemingly calm day, Antarctica and her family were hunting fish, when a sudden storm blew up. Hail rained down, snow whirled and blinded them, and the wind howled like a dying animal. The small family of dragons were quickly separated. A sudden gust of wind blew Antarctica away, towards the looming cliffs. Her tiny wings were not strong enough to steer herself away, and she crashed, killed instantly.

The next morning, her parents found her body, drifting quietly in the sea, a sad smile on her cold, lifeless face.

Meanwhile, Antarctica found herself a ghost, drifting in the misty relm of the dead. For a while she just talked to other ghosts, but got bored. So, despite the other ghost's scorn, she threw herself back into the world of the living, desprite to see her parents.

To her shock, though, she found they were dead. Time in the spirit world moves much faster then time in the world of the living, and many years had passed. They had grown old, and died.

Antarctica traveld back to the misty realm, but, try as she might, she could never seem to find them.

Years passed. Antarctica took to drifting around Pyrriha, seeing the many places, watching other dragons grow. Sometimes she whispered advice in their ears, pushed them in the right direction.

Till she met Blizzard. Bizzard was a young IceWing dragonet, covered in scars. She had electric blue eyes, and a chilling aura. But what was most intresting about her was that she could see Antarctica, something no other dragon could do.

Slowly, over time, Antarctica befriended Bizzard, and found out her history. Blizzard had been tortured beyound belief by the SkyWings. She had watched her parents and siblings be killed before her eyes, before she had escaped, compleatly insane.

Antarctica took it upon herself to help Bizzard. She became her personal pyscoligest, whispering in her ears, helping her to relax, to forgive. Blizzard and Antarctica traveled togeather towards the Ice Kingdom, Blizzard slowly changing, becomeing more sane. Currently they are on the fringes of the ice kingdom.

Snow Owl, or 'Owl' was an orphan, found alone in a forest. She was adopted by a old couple, Articwind and his mate, Sleet . They loved her dearly, and, truth be told,were overprotective of her. However, instead of growing stubborn and rebellious, Snow Owl grew up to be gentle, kind, and submissive.

When Frost defeated Subzero and became queen, Snow Owl moved to The Ice Palace and worked as a servant, cleaning and fetching for the queen and her advisors. While working her, she met Flurry, who worked as a cook in the kitchens. They fell in love, and moved back to Snow Owl's home village, and eventualy had Antarctica, who was their pride and joy.

Flurry was born to a low ranking family who worked at the Palace. His mother and father worked as cooks, and trained Flurry as a cook too. As a dragonet, Flurry was quiet, peaceful, and hard working. He was the apple of his mothers's eye, and often made her little gifts.

Flurry met Owl when in the kitchens, and liked how she was always gentle and helpful. He did all he could to impress her, but unfortunately mostly just made a mess of himself. However, Owl found his antics amusing, and fell in love with him. The rest is history.

After their daughter died, Flurry and Snow Owl moved back to Owl's parent's house. They stayed their till Articwind and Sleet died, mourning their beloved daughter. Afterwords, they moved back to the palace.

"The scars on the outside are not the problem" - To Blizzard, when they meet.

"Wisdom is knowing how to use knowledge. Knowledge by itself is useless." 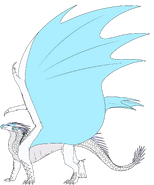 Base by Owibyx
Add a photo to this gallery
Retrieved from "https://wingsoffirefanon.fandom.com/wiki/Antartica?oldid=2077700"
Community content is available under CC-BY-SA unless otherwise noted.