Please don't use any elements of this page without the creators permission. Original coding by Fawnspotss, edited by Snowball 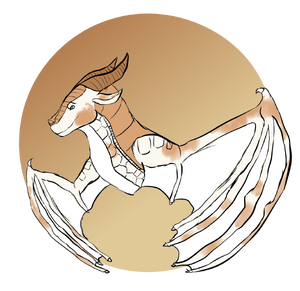 This mostly white dragon is sometimes confused for a hybrid, but he's just a leucistic mudwing. He has patches of brown in all over his pure white scales, and his green eyes stare strait into you soul. But like, in a cute way. Angora is slightly chubby, though he perfers to be called "fluffy". His innocent expression makes him look much younger than he is. He has been mistaken for a 4 year old dragonet before.

His personality, like the rest of him can be described as fluffy. He is happy and cheery and calm, until he sees a dragonet, then he gets super nervous that he's gonna sit on one of them or drop them or leavesharpobjectsnearthemor

You get the idea. Is calm, innocent demeanor often leaves his customer thinking what the hec did I just buy.

-Flood: Brother. Angora thinks his brother is way too nervous and should calm down

-Auburn: Sister. Angora is pretty sure Auburn is an adult dragoness with the sense of humor of a 3 year old boy. She's always laughing at butt jokes and dosent care if she farts in public. Angora is super embarrassed.

-Sediment: Sister -Aurora: Angora tried to sell this icewing a pasta maker, but she got all mad and yelled something about tomatos. Angora isn't sure what to think of this dragon.

- Was originally going to be a rude and mean Icewing but I went, NAW MAKE EM FLOOFY MUDWING

- The Angora rabbit, which is one of the oldest types of domestic rabbit, is bred for the long fibers of its coat, known as Angora wool, that are gathered by shearing, combing, or plucking. Because rabbits do not possess the same allergy-causing qualities as many other animals, their wool is an important alternative.

- Leucism (/ˈluːsɪzəm, -kɪz-/) is a condition in which there is partial loss of pigmentation in an animal—which causes white, pale, or patchy coloration of the skin, hair, feathers, scales or cuticle, but not the eyes. It is occasionally spelled leukism.

- He has a large family even for mudwings

- The eye thing is because I think that bunnys look like they are watching you and plotting against you, but like, in a cute way 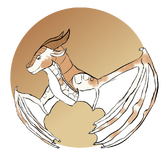 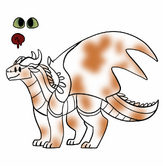 Words
Add a photo to this gallery
Retrieved from "https://wingsoffirefanon.fandom.com/wiki/Angora?oldid=1983683"
Community content is available under CC-BY-SA unless otherwise noted.