Dragonet on the run

On the run in Pyrrhia 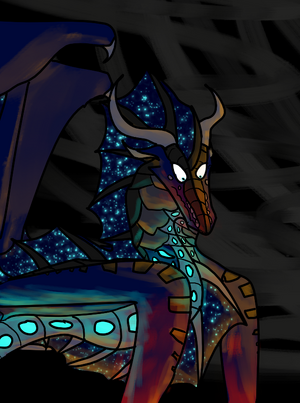 Anglerfish is a male SeaWing-NightWing hybrid. He lived in The Night Island for most of his life before moving to a village in The Sea Kingdom. He's currently on the run from his family.

Anglerfish is untrusting of other dragons, and generally anxious around strangers or crowds. He's quite cowardly, willing to run from a fight even if it means someone else may die. He usually reacts by his instincts which, due to his weak prophecy powers, usually are right. He's non-confrontational, and dislikes arguing with other dragons.

Anglerfish has a completely SeaWing build, other than a few NightWing-like scales on his snout that replace a few glow-scales. He is a mostly black dragon with a purple-tinted gray underbelly. He has light blue glow-stripes, and spots of the same color on his wings and webbing. He's skinny and small due to being underfed most of his life, and quite weak. He has icy blue eyes, which have be described as 'creepy' by his classmates in The Sea Kingdom.

Anglerfish's father was a SeaWing named Halibut, who was married to a SeaWing noble named Oyster when he met Sparkwings, a NightWing on a scouting mission for a new home, who had been injured in a storm. Halibut helped the NightWing recover, slowly falling in love with her. She returned his affection, and kept meeting with him after she had recovered, flying down from the north every month. She even told him tribe secrets, like the Night Kingdom's location and the fact that NightWing powers were a lie.

Eventually, Sparkwings laid Anglerfish's egg. She wanted to bring the news to Halibut, but the tribe was growing suspicious of her trips south. She was able to sneak down a few months later, but by now Anglerfish was almost about to hatch. As they landed on the Sky Kingdom's northern shore, Sparkwings hid the egg and went off to hunt.

Under the light of one full moon, Anglerfish hatched while his mother was away. However, his egg had been placed in a shallow pool of water, which had dissipated a lot of the moonlight's power. These weak powers manifested as a slightly-prophetic instinct, though neither Anglerfish nor anyone else knows about his power.

When his mother returned, she noticed the dragonet and, seeing the eggshell in the pool, realized that Anglerfish was her son, and he had hatched. She realized that traveling with the dragonet would be even harder than with an egg and, sorrowfully, realized she had to abandon the mission to talk to Halibut. She flew back, hiding the dragonet in a partially flooded cave.

Anglerfish grew up relatively alone for the first four years of his life, only ever seeing his mother. She told him about Halibut, the NightWing Tribe, Pyrrhia, whatever else you could imagine. Sparkwings also taught Anglerfish how to catch fish, as Halibut had taught her. He lived like this until he was four, eating fish and only seeing his mother a few times a week.

However, eventually, the NightWings found out about Sparkwings's betrayal. A NightWing had followed Sparkwings to Anglerfish's cave, and had reported the news to the queen. The two were ambushed an hour later, the NightWings pinning Sparkwings to the ground as she told Anglerfish to run, and find his father. Anglerfish managed to escape by diving underwater and swimming away, leaving his mother to an unknown fate, at least for him.

He eventually found Halibut's village and, after asking around, tracked him down. When he knocked on the door, he was awnsered by Oyster. Oyster noticed the similarities between the dragonet and Halibut, and immediately slammed the door, running over to Halibut and confronting him. Halibut had no clue what she was talking about, and walked out to see Anglerfish.

Seeing Anglerfish, he guessed what had happened, and immediately welcomed the dragonet in, much to the disgust of Oyster. Anglerfish waited nervously as the two argued in the other room. During this time, Halibut and Oyster's children returned home.

Seeing the dragonet, the two were confused, but seemed to accept him. They introduced themselves as Dolphin and Swordfish, who were both a year older than Angler. Dolphin was a very pretty, pearly pink SeaWing, very much taking after her mother, while Swordfish was more of a mix, with his father's build and light blue coloring similar to neither of his parents. Anglerfish quietly talked to them, but didn't tell them why he was there or who he was other than his name, much to the confusion of the siblings.

Eventually, Oyster and Halibut came out and talked to their children. Oyster told them that they were adopting Anglerfish, but didn't tell them he was his father's illegitimate child. The two enrolled Anglerfish in the local school, and his siblings seemed to accept him.

However, three days later, the two started treating him badly. They bullied and insulted him, stealing his things. Anglerfish eventually learned that Dolphin had eavesdropped on her parents, and found out the truth. The two siblings hated him for it, tormenting him.

He lived like this for three years, at which point the War of SandWing Sucession was in full swing. The family had been going through some financial troubles, as Oyster didn't want to work, and Dolphin believed her father to be wasting the family's money "on that half-bred eel-eater." She and Swordfish devised a plan to 'free the family of their burden,' which Oyster half-heartedly supported.

They planned to ambush and kill him, and stitch back together his corpse, than sell it to Burn to be put in her collection via some SandWing Merchants that often visited their village. The two siblings believed this plan would not only rid them of Anglerfish, but also 'finally have him make some contribution to this family.'

One day, as Anglerfish was studying by a fountain, Dolphin took the opportunity attacked him. Having been alerted by his instincts, he attempted to flee, but was chased by Dolphin. He turned to fight his half-sister, and the two started a long battle.

In the end, Dolphin leapt on Anglerfish in an attempt to pin him to the ground. Anglerfish turned his head and shot a blast of fire at the SeaWing, melting and fusing together the scales on her face. The dragon snarled, continuing to try to attack him in a blind rage, but the hybrid slashed her eye and ran to the shore, diving into the sea. He took off, hoping to flee his sister.

Retrieved from "https://wingsoffirefanon.fandom.com/wiki/Anglerfish_(Spirit978)?oldid=2132263"
Community content is available under CC-BY-SA unless otherwise noted.